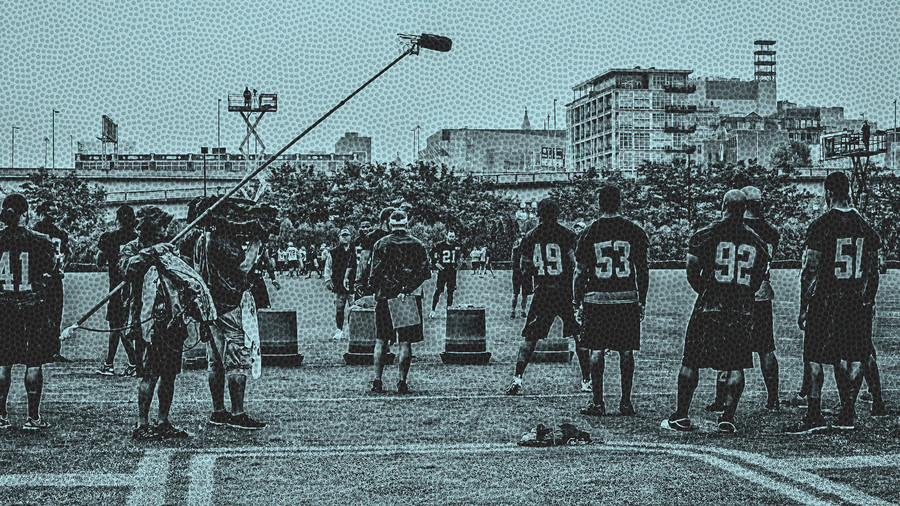 Here’s How Hard Knocks Has Taken NFL Fans to School

Although NFL teams have been in training camp for over a week now, for fans who aren’t making trips out to the various camp sites across the country, training camp doesn’t really start until the new season of Hard Knocks hits their television sets.

The Oakland Raiders are the featured team in this year’s version of the iconic HBO series that began in 2001. With head coach Jon Gruden and outspoken star receiver Antonio Brown, this season is one of the most highly anticipated in the history of the series. But Hard Knocks is more than appointment viewing. Starting with the premiere season, which followed the defending Super Bowl champion Baltimore Ravens, the show itself has helped change perceptions of training camp, and has been a rich text when it comes to showing the evolution of the sport.

A Pilot Season to Remember

In terms of great soundbites, the original season of Hard Knocks may still be the toughest one to top. It set a tone for what has become an iconic show, and one of summer’s sports totems.

The 2001 Baltimore Ravens were fresh off of a Super Bowl when the cameras of NFL Films decided to give fans a more unfiltered look at NFL training camp. NFL Films had always been a pioneer in terms of giving fans direct access to the game, but premium cable television allowed an even more authentic look at the grueling realties of the National. Football. League.

The first season was rich with all the storylines of the defending champs, but also personalities that would later become some of the biggest voices in the football world. Ray Lewis, Shannon Sharpe, and Tony Siragusa would all go on to hold prominent positions on television, but their path to that started with the personalities they put on display during that season of Hard Knocks.

It was more than big names and access to familiar stars. For the first time, fans saw the drama of players fighting for their professional lives in the NFL. In a league where players are covered in pads and helmets and the average undrafted free agent third-down running back gets scant television coverage, the show gave viewers a much deeper look at their personalities—and the personal consequences of training camp cuts.

In addition to players trying to make it on the fringe, that first season made viewers privy to the give and take of positional battles, such as the quarterback battle between Elvis Grbac and Randall Cunningham. (Where was Super Bowl winner Trent Dilfer? He was, uh, "re-cast by the producers.") And it revealed the ways teams must adjust to devastating injuries—in this case, a season-ending ACL tear to star running back Jamal Lewis.

Featuring big personalities in a big market, the 2010 season of Hard Knocks was as dramatic as any prestige HBO hit. It started from the top down, with the two most important positions—head coach and quarterback—ably filled by Rex Ryan and Mark Sanchez. Stars like linebacker Bart Scott and Darrelle Revis played key roles, and the show birthed cult figures, such as special teams coach Mike Westhoff.

And while there were some amazing sound bites from that season from Rex Ryan ("let’s go get a bleeping snack!"), this season was truly incredible because of the insight it gave fans on the contract negotiations between the Jets and then-star cornerback Revis.

Back in 2010, Revis was widely regarded as the best cornerback in the NFL, putting opposing wide receivers on “Revis Island,” where they would never be heard from again. But the Jets’ appearance on Hard Knocks showed us that no man-to-man defender is an island. When a star player threatens a holdout, it’s all hands on deck.

Behind the scenes, secret negotiations played out between Revis’ agents and the Jets brass, who met at bars off the beaten path, where they wouldn’t be spotted by other media members. It was part sports documentary, part high-stakes thriller, and a riveting look into how business with the NFL’s biggest stars gets done.

While the NBA is having a moment with superstars flexing their leverage in free agency, Revis became a then-rare example of player empowerment in the NFL. Now, his approach has seemingly swept the league, with holdouts—or at least the threat thereof—becoming an August tradition. Would the Chargers’ Melvin Gordon be making the contract noise he is today had Revis not been rewarded for it in prime time nearly a decade ago?

More importantly for the show, Revis’ holdout created a climactic moment when he returned to training camp. (He always did claim to perform best when the cameras were on.) The Jets also put aside any distractions the camera crews may have caused, becoming one of the more successful Hard Knocks participants after knocking off the Patriots in Foxboro to advance to the AFC Championship. That Jets team didn’t win the big one, but they achieved a lasting place in history, thanks in part to those camera crews.

Browns, Raiders and the future of Hard Knocks

Last year’s season of Hard Knocks, following the 2018 Cleveland Browns, was one of the best in recent memory. And it seems that HBO and the NFL have both realized that the show is only as interesting as the team they are profiling.

The arrival and emergence of Baker Mayfield laid against the backdrop of LeBron James’ departure from Cleveland helped convey just how much excitement and hope surrounded the Browns. The citywide sports grace period after the Cavaliers’ 2016 NBA title wore off after Ohio’s prodigal son left (again). All eyes were back on the long-suffering Browns, who had been building for years to be relevant. Although things didn’t go quite as planned in Cleveland, Hard Knocks captured the nascent excitement around Mayfield building to what it would become today, as the sophomore quarterback graces magazine covers and leads a team favored—yes, favored—to win the division.

Heading into the show’s latest season, one can only hope that Antonio Brown picks up where fellow alpha-dog receiver Jarvis Landry left off last season, with incredible highlight plays and one-liners (Bless ‘em!). Despite Brown’s arrival, the Raiders aren’t favored to do quite as well as Cleveland. Hard Knocks may be a much-needed balm for Oakland fans, who must soon weather the loss of their team, in addition to all its projected losses on the field. Between Brown, the always-passionate Jon Gruden (have you seen him sing the praises of Nathan Peterman lately?!?), Vontaze Burfict, and the always controversial Richie Incognito, this coming season has all the trappings of another classic.

Catch the new season of Hard Knocks Tuesdays at 10pm on HBO with DIRECTV.

If you didn't catch Parts 1 or 2 of our training camp series, read on...

Part 1: How NFL Training Camp Has Changed in the Last 10 Years

Part 2: An American Tradition: The Return of High School Football