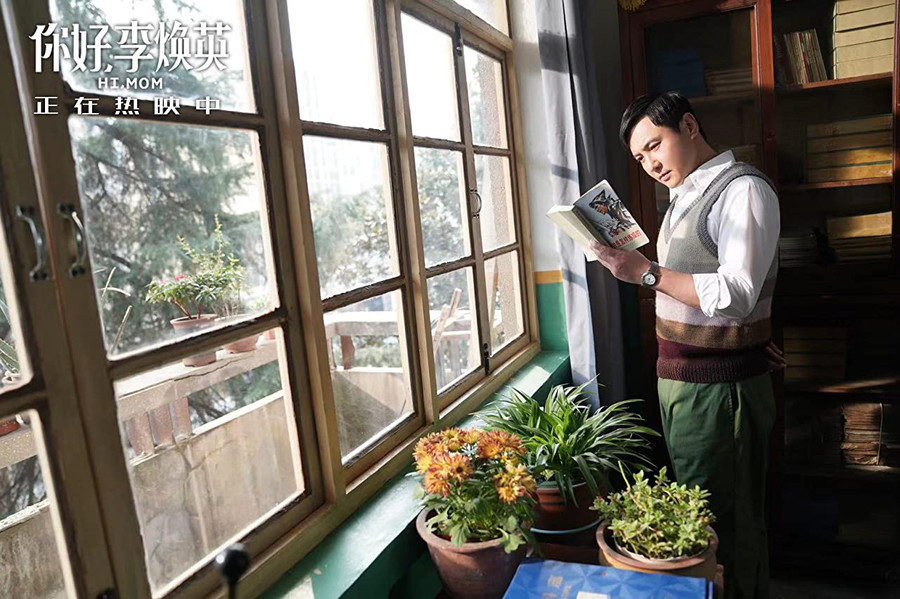 Hi, Mom Is The Highest Grossing Movie of 2021: Here’s Why

At only six months deep into 2021, this year has already proven to be a year chock full of blockbusters. Highly anticipated features like "Zack Snyder's Justice League," "Tom & Jerry," "F9" and "Godzilla vs. Kong" have done great numbers on either streaming platforms or movie theaters. And while "Zack Snyder's Justice League" accrued 3.7 million viewers in its first 39 days on HBO Max according to Samba TV, those latter aforementioned movies respectively make up the ninth, fourth, and third highest-grossing movies worldwide of 2021 so far, according to Box Office Mojo (as of this writing).

Western audiences reading the rest of the list of the top-grossing movies may notice that the name of the number one entry may not look so familiar. Unlike all the movies mentioned thus far, the highest-grossing movie of the year does not hail from America. In fact, as of this writing, the movie has actually yet to even be distributed and released in the United States.

The movie in question? A movie that hails from China and is called 你好，李焕英, which from Mandarin to English translates to "Hello, Li Huanying." Though, the movie is recognized best by its more simplified title: "Hi, Mom."

Its plot is a bit more complicated than what the movie's lighthearted, rom-com-esque poster and trailer may lead on. The movie is something of a comedy sci-fi period piece, as it starts off in the year 2001 where Jia Xiaoling (played by the film's writer/director, Jia Ling) discovers that her mother, Li Huanying, (played by Zhang Xiaofei) dies in a fatal car accident.

Distraught, Jia suddenly finds herself thrust back in time to the year 1981, where she meets a young version of her mother. Convinced that she hasn't been the ideal daughter, Jia sets out on a journey to befriend her future mom, give her memories worth cherishing and match her up with a different husband so that her mother actually births a better daughter who can give Li the ideal life.

The path to which this movie came to being made is almost as strange as its concept. Ling has worked in the comedy field for almost 20 years. Prior to "Hi, Mom," the Central Academy of Drama graduate gradually rose to prominence through working in theater and eventually movie and television roles, starting with her TV debut at the CCTV New Year's Gala. She quickly gained a cult following for her frequent guest appearances on "Your Face Sounds Familiar," a celebrity impersonation competition.

Ling, during the mid-2010s, was perhaps most notable for a 2015 sketch parodying the Hua Mulan folk tale, where she depicted the classic heroine as a cowardly glutton. The depiction drew its detractors, like the Mulan Cultural Research Centre who thought that Ling's performance was disrespectful enough to warrant a public apology, which Ling gave via her Sina Weibo account, the Chinese equivalent to Twitter.

Interestingly enough, Ling's apology and, overall, her sketch seemed to be met with much more support than criticism seeing as, according to China Daily, a Sina Weibo survey of 70,000 people replied with 60% believing that Ling had no reason to apologize. The general consensus being that sketch comedies are meant to be treated as parody and, as such, Ling shouldn't be put under such scrutiny.

Love it or hate it, this incident would quickly be trumped by a much bigger one a year later. Frankly, a more positive one at that. In 2016, Ling took part in the first episode of a comedy competition show called "Comedy General Mobilization," where she crafted a sketch for the competition that she called, "Hello, Li Huanying." As its title would suggest, the concept of it would soon form the basis for Ling's film five years later, but the bigger story at this point in time is that the sketch won the first place prize in the episode.

Another year later in 2017, Ling gained enough star power to fund her own production company, Big Bowl Entertainment, which would produce "Hi, Mom." Speaking of its making, Ling — alongside co-writers Sun Jibin, Wang Yu, Bu Yu, and Liu Honglu — would spend a little more than three years crafting the script for "Hi, Mom" before production officially went underway on September 25th, 2019, according to the South China Morning Post.

As time progressed, "Hi, Mom" finally saw the light of day on February 12th, 2021, which is officially Chinese New Year. After a three-month run exclusively in Chinese theaters, "Hi, Mom" racked up $848.4 million, which converts to over 5 billion Chinese Yuan.

Sure, Ling's star power is impressive in China, but compared to other actors in the country, she's still a rising star — even as the 93rd ranking on the Forbes China Celebrity 100 list. She's still the biggest star among her cast, and she's making her directorial debut. All things considered, "Hi, Mom" was bound to be a success, but, certainly, nothing of this magnitude was expected by anyone involved. Not even Ling herself, who admitted on her Sina Weibo account (h/t Variety) that “All of it was unexpected — unexpected to the point that although I’d been prepared to heavily promote the film, once it came out [and was so successful], I was practically embarrassed to do so.”

As far as promotion goes, the film was marketed with a December 16th trailer titled, "What kind of family is this?" Followed by posters released on Christmas Eve. Christmas Day saw another promotional video release, titled "Where are you going, Dad?" Then, finally, a music video for the film's song, "Little Girl Under the Street Lamp" was released. It doesn't seem as though anything out of the ordinary or unique was done to push it, marketing-wise. Yet what little promotional work was done paid in dividends.

The monumental success of this movie almost seems like an anomaly but, nonetheless, has a reason. Sites like Variety cite "Hi, Mom's" success simply as "strong word of mouth." Though, it's easy to see why that may be the case.

For starters, the movie released just as COVID restrictions started to loosen worldwide and as more theaters started to open back up. The average moviegoer was anxious, hungry even, to get back in front of a big screen. But even then, that same moviegoer could've gone out to see any number of movies, but many in China chose to go see "Hi, Mom," some multiple times it would appear. Why? Perhaps it's because the movie features familial ideas that give them an emotional punch that makes it a must-see viewing.

Beneath the film's comedy is a relatable, emotional, core theme of family drama laced in mother-daughter relationships. Ling wrote the movie in honor of her mother who, like her character's mother, died in 2001.

"I want to show the audience the happy days I spent with my mum," Ling told Beijing News (h/t The Guardian). "Those are the most precious days in my life. If the audience wants to call their mothers after seeing the film, I am satisfied."

These themes of family, loss, and daughters' relationships with their mothers sparked some ongoing conversations on social media — namely Sina Weibo — where the film's hashtag had been viewed and used over 1.67 billion times and reposted 580,000 times, according to that same Guardian article. The social media engagement and positive online reviews went a long way to spark the average fan's interest in going to see the movie.

This all contributed to the movie's success in China and is bound to lead to some success in America. It's going to be hard to keep this one a secret from Western audiences for too long with its overwhelming reception. Don't be surprised if this one resurfaces with a release date by award season and likely even an Oscar nomination, at least for Best International Feature.