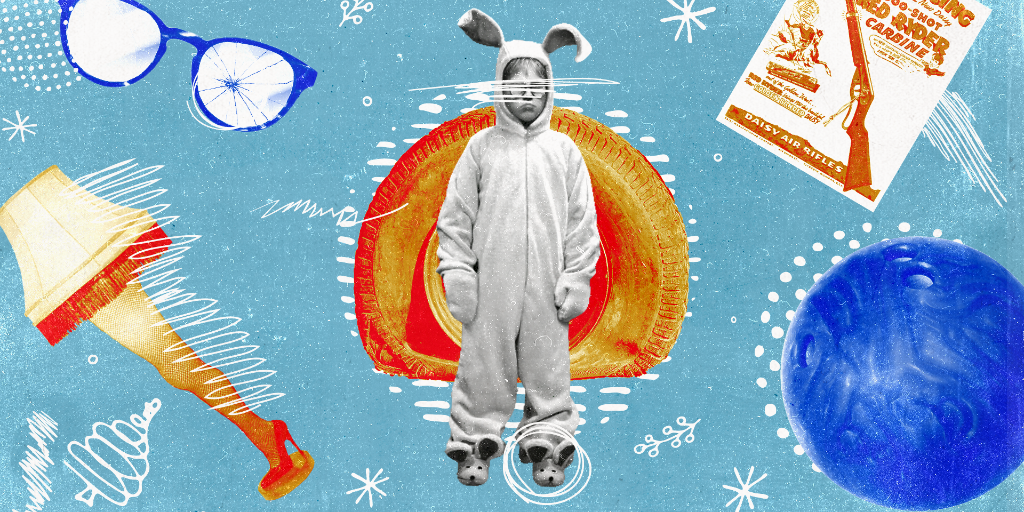 You know it, you love it, and you probably quote it year-round. It's a Wonderful Life and Miracle on 34th Street may be the traditional holiday classics, but when it comes to the true spirit of the season and how it conjures up the world's coziest Christmas memories, A Christmas Story has them well and truly beat.

The tale of young Ralphie Parker and his crusade to get a Red Ryder BB gun on Christmas morning is as timeless as leaving Santa milk and cookies and for good reason. It's the most nostalgic piece of holiday media we've ever had the fortune of viewing. From Ralphie waiting in line with his little brother Randy to sit on Santa's lap at Higbee's department store to unwrapping a heinous set of pink rabbit pajamas he'd never be caught dead wearing, it's brimming with callbacks to how just about every single one of us spent the holidays with our loved ones growing up—and still do.

A Christmas Story is nostalgic decadence for many reasons, mainly because it bucks tradition in nearly every single way. Ralphie's mother is a doting yet firm caregiver. His father doesn't seem to pay much attention to what's going on, but when he's angry, you'd better watch out. The kids at school swear. Ralphie's little brother Randy is a brat, just like you might expect; how many of our own siblings are angels? Money is tight, and the world isn't perfect. And the mall Santa isn't interested in helping to make anyone's dreams come true. Ho, ho, ho.

Like it or not, that's how Christmas is and has always been, for families all around the world. It isn't a miraculous story about angels or falling in love and realizing the "true" meaning of the holiday. It's making time for our loved ones, getting along despite our differences, and being able to laugh at each other even when things don't go our way. And for many of us as children, opening gifts on Christmas morning certainly didn't go our way.

In fact, much of A Christmas Story centers around young Ralphie yearning for a gift that he can't have. He obsesses over it for most of the film in the days leading up to Christmas morning. Many of us can recall a time when we begged our parents or family members for a specific gift during the holidays and were swiftly shot down, told that it wasn't in the price range, or, if you still believed in Santa, that Santa might "consider it" if you were good. Of course, some of these negative situations turned into positives, when stuffed under a tree you'd find the object of your desires and a knowing smile plastered on your parents' faces. They knew what you wanted all along, but they had to string you along a little bit, you know.

That's the case with Ralphie's BB gun in the movie. Toward the end, after he and Randy have exhausted their supply of gifts, there's still no Red Ryder in sight.

"Did you get everything you wanted?" his father asks slyly.

"Almost," a dejected Ralphie says, before his father "notices" something behind the desk in the living room. It's one more gift, and his father coaxes him to check it out. It's the last, cleverly-hidden surprise of the holiday: what he's been waiting for all along. The "Old Man" came through.

How many of us have been in that exact situation? Thinking our parents "forgot" what we wanted, or that Santa skipped us over...only to get a big surprise in the end. It's a positively heartwarming moment because we've been there, too. We know the disappointment and the massive wave of excitement that washes over you when you realize your parents were just teasing you. And then you get to play with your spoils.

Similarly, we've all seen a mall Santa at the local Walmart, or wherever our parents took us when we were children to get into the holiday spirit. Whether we were the screaming children refusing to sit on Santa's lap and tell him what we wanted or simply observed a never-ending parade of them, A Christmas Story absolutely nailed the feeling of waiting in line to tell Santa your greatest wish, only to be met with a sinking feeling of disappointment afterward: wait, what if Santa isn't real. What if you didn't tell him everything you wanted?

Ralphie finds himself in this precarious situation. He locks up when he finally reaches Santa out of pure fear, like so many kids do in the presence of the jolly old man. He flubs and says he wants a football, but immediately snaps out of his stupor, refusing to head down the exit slide from Santa's line before telling the North Pole-dwelling legend what he really wants: his Red Ryder BB gun. But nothing goes according to plan, and Ralphie isn't sure if he blew his only chance. This fateful Santa visit is just like the experiences so many of us had growing up.

A Christmas Story is chock-full of little moments like these that remind us of universal childhood memories and feelings: ordering Chinese food over the holidays because there's no grand feast, putting up with Dad's crazy idiosyncrasies, or accidentally saying a swear word and having to face the music afterward—even if it meant a terrible mouth soaping. Gross.

Through it all, the Parkers remain an incredibly close and loving family unit, and, by the end of the film, it's clear they've found a newfound love and kinship for one another. Ralphie gets his gun. Randy gets all the toys he could ever desire before passing out like a sloth. Mom and dad are ecstatic about seeing their kids happy. Christmas joy fills everyone's hearts—even if the next day means bickering and dysfunction once more. If that isn't a timeless and relatable Christmas tale for the modern age, we don't know what is.