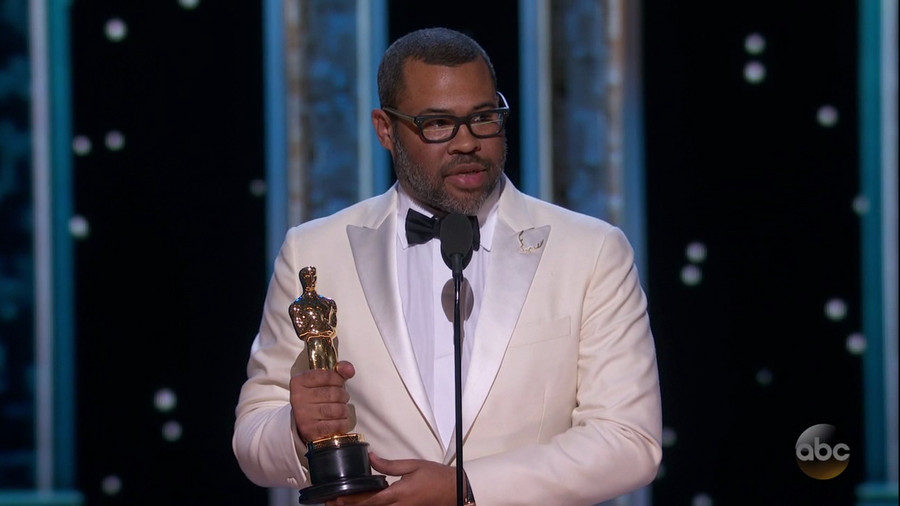 Mar. 15--It was the right film at the right time. Jordan Peele's debut, the horror-satire "Get Out," about a black man trapped in a world of white gentility, became a critical and commercial hit in 2017, earning Peele a screenwriting Oscar and announcing the arrival of an exciting new talent.

"Us," his second film, arrives in theaters Friday, March 22. Judging from early rave reviews, "Get Out" was just the beginning.

In the space of just two years, the former star of the sketch-comedy show "Key & Peele" has established himself as a filmmaker with major Hollywood clout and a uniquely artistic voice in the entertainment world. It wasn't just Peele's funny-yet-frightening take on the hot-button issue of race that made him a critical darling but his vivid cinematic style, which -- according to at least one review of "Us" -- is on par with that of Alfred Hitchcock.

Like another maestro, Steven Spielberg, Peele has formed his own production company and is about to launch a reboot of the classic CBS television series "The Twilight Zone," which has drawn such hot names as Sanaa Lathan, Seth Rogen, Adam Scott, John Cho and Jacob Tremblay. Peele also served as a producer on Spike Lee's Oscar-winning hit from last year, "BlacKkKlansman."

"Jordan Peele has really stepped out onto another level," says Brian Welk, film reporter at The Wrap. "It's hard to imagine him going back and doing another sketch comedy show or being the host of the Oscars or something. He's an auteur now."

The future auteur began as a cast member of television's "Mad TV" in 2003, around the same time as Keegan-Michael Key. The two comedians developed a chemistry and eventually formed their own show, "Key & Peele," for Comedy Central. It premiered in January 2012 and quickly earned a following.

The duo stood out for their fresh approach to topical comedy, particularly their handling of race. The "Substitute Teacher" sketch, for instance, in which Key played an educator unable to pronounce the names of suburban white students, is a good example of the show's ability to toy with stereotypes and mock the unmockable.

"It was an interesting time because you didn't have as much diversity in television when they were on," says NPR television critic Eric Deggans. "They were doing these really funny, insightful and smart comedy bits, but also talking about race and culture in ways that people weren't seeing at that time. They came across at just the right moment."

The same could be said for Peele's decision to move into filmmaking. It was after his stint on "Mad TV" that Peele began writing scripts, including the one that became "Get Out." Peele once described it as his attempt to do for African-Americans what the "The Stepford Wives" did for women -- address their deepest anxieties, fears and paranoias. The longtime comedian also said he didn't see anything strange about moving to horror for his debut film: "I think of the two genres as being very linked," Peele said in an interview shortly before the film's release. "You're looking for visceral, audible reactions, and part of that art form is the ability to subvert what the audience thinks is going on."

"Get Out" starred a then-little-known Daniel Kaluuya as Chris, a young man meeting his girlfriend's parents (Bradley Whitford and Catherine Keener). The initial, we're-all-cool-with-it vibe eventually curdles into something more sinister, and Chris realizes too late that he's fallen into a trap. After premiering at Sundance in January 2017, the film was released in the usually dreary month of February and became an instant smash. "Get Out" marked a couple of important milestones: It was the rare horror film to feature a black lead (George A. Romero's "Night of the Living Dead," from 1968, is the most widely cited other example), and the first film from a black director to reach $100 million at the box office.

"Horror is really hot right now, which a lot of people trace back to what's going on in the country," says John Squires, the Hampton Bays-based editor-in-chief of the horror website Bloody Disgusting. "It just really grabbed people's attention, the hook of that plot. It was the right conversation to be having at that time."

Peele has said that his follow-up film, "Us" is not as specifically focused on color, though it does focus on a black family of four, the Wilsons (Winston Duke and Lupita Nyong'o play the husband and wife). While on vacation at a summer home, the Wilsons are stalked by a family who look exactly like them. Reviews from the film's premiere at the South by Southwest conference and festival in Austin, Texas, earlier this month have been glowing, promising an even deeper-reaching -- and much scarier -- film than "Get Out."

"This movie is about this country," Peele said at a Q&A after the screening, according to The Los Angeles Times. "I was stricken with the fact that we are in a time where we fear the other, whether it is the mysterious invader that we think is going to come and kill us, take our jobs, or the faction that we don't live near that voted a different way than us. We're all about pointing the finger."

Peele added, "And I wanted to suggest that maybe the monster we really need to look at has our face, maybe the evil is us."

Peele's instincts for topical horror would seem to make him a savvy choice to reboot "The Twilight Zone," the classic series whose stand-alone stories tackled the anxieties of the early 1960s, from communist takeover to nuclear war to workforce automation. Peele's version -- which premieres April 1 on the streaming service CBS All Access -- is well-timed, says NPR's Deggans, partly because of the increased popularity of anthology series like "Black Mirror" and "True Detective," but also because CBS has long been criticized for a lack of diversity in its programming.

What's next on the horizon for Peele? It's a long list that includes the documentary series "Lorena," about the infamous husband-mutilator Lorena Bobbitt; an HBO horror series, "Lovecraft Country"; the Nazi-hunting series "The Hunt" for Amazon Studios; and several other projects.

"I think it's interesting to see if the pendulum will swing back," says Matt Donnelly, senior film writer at Variety. "I think he's setting the stage to be a really creative and diverse entertainer for a long time. But I hope he comes back to comedy or even drama, because I think other genres really need him."

This article is written by Rafer Guzm�n from Newsday and was legally licensed via the Tribune Content Agency through the NewsCred publisher network. Please direct all licensing questions to legal@newscred.com.