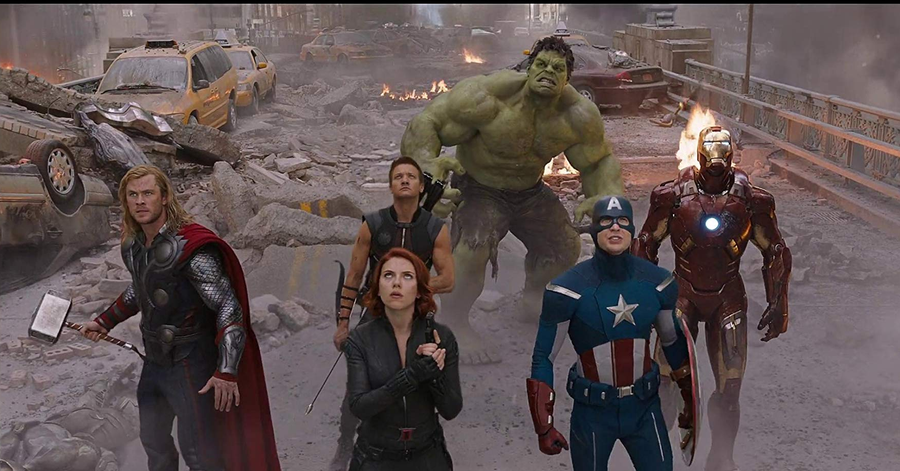 Over $6.8 billion at the box office and more than 20 movies in ten years. These are the numbers that define the Marvel Cinematic Universe, and these are the numbers that nearly every single movie studio has been chasing ever since the outrageous and unprecedented success of Marvel's The Avengers. Even with plenty of stumbles along the way (we’re looking at you Iron Man 2), competitors can attest that chasing these numbers hasn't been an easy pursuit. With The Avengers, Marvel and Disney dramatically altered the movie-making landscape forever.

Back in 2007, the concept of a cinematic universe was not a phrase bandied about as frequently as it is today. Back then, there were plenty of film franchises that had connective tissue tying them together—like Disney’s Pixar movies or Quentin Tarantino's personal ouvre of independent dramas. But most of these films existed independently of each other.

Before Marvel Studios became the juggernaut we all know it as today, Marvel was content to simply license out its characters (like Spider-Man, the Hulk, and Blade) to other studios. Before Iron Man, the licensing of one film or a set of characters had nothing to do with long-term future profits. That all changed when Marvel decided to stake the future of an entire slate of films on the still-shaky reputation of Robert Downey, Jr. and Elf director John Favreau, unifying an entire history of comics under one single umbrella.

The success of Iron Man as the second-highest grossing film of 2008 (behind The Dark Knight) might have been a surprise, but it was one Marvel Studios was gambling on. In that first Marvel Cinematic Universe (MCU) feature, the seeds were planted for a larger world—not just in the movie itself, but in the first post-credits sequence when Nick Fury told Iron Man, “You’ve become part of a bigger universe. You just don’t know it yet.” It’s clear now that he was talking to viewers, too.

Then, in 2012, came the release of the sixth MCU film The Avengers and everything Marvel had been working towards finally came to fruition. The bold team-up movie was not only a fantastic payoff for fans, but was also a tremendous boon for Marvel Studios to the tune of $623 million domestically making it, at the time, the third-highest grossing film in the US and worldwide. The success of The Avengers paved the way for the next six years of Marvel movies which exploded and expanded to reach corners of the Marvel universe that would have seemed improbable just a few years earlier.

Eyeing Marvel's success, competitors tried to replicate their own cinematic universe. Without even waiting to see how the revamped Mummy would fare at multiplexes around the world, Universal committed to a series of films themed around the classic monsters Dracula, Frankenstein, Wolfman, and, of course, the Mummy. They put a large promotional push behind the announcement with stars like Javier Bardem, Russell Crowe, and Johnny Depp all tied to future spin-offs. A Dark Universe slate even ran before The Mummy so viewers would know this was just the start of something bigger. It was also the finish, however, as Tom Cruise's starring effort barely pulled in $80 million in the US, damning the rest of the films before they even had a chance to get off the ground.

Warner Bros. was perhaps the best bet to take on Marvel with its own comic library. As the owner of DC Comics, Warner Bros. had a healthy portfolio of characters, stories, and talent it could rely on to bring prestige and accolades to its own world. In 2013 Man of Steel got the ball rolling. Then in 2016 we saw the Trinity united for the first time on screen in Batman v Superman: Dawn of Justice. In that same timeframe, Warner Bros. announced that a whole slate of DC Comics films were coming, starting with Suicide Squad and Wonder Woman, and followed by a Justice League feature in 2017 that would introduce Aquaman, the Flash, and Cyborg, ahead of solo movies of their own.

Delivering one of the most memorable superhero films of the decade and catapulting Gal Gadot into super-stardom, I think we can all agree that Wonder Woman was a genuine hit. Such a hit, in fact, that it got the green light to be the first true sequel in the DC Extended Universe (DCEU) with Wonder Woman ‘84. Unfortunately, the rest of the Justice League's disappointing debuts (Justice League made just under $230 million in the US) put the future of the DCEU into a bit of a quagmire. The Flash and Cyborg don’t have a clear a future, and, shockingly, neither do Batman or Superman. Even with some of the most recognizable superheroes in the world, Warner Bros. hasn’t been able to find the same kind of consistent box office acclaim as Marvel Studios.

Likewise, Sony had big plans for the Spider-Man license it purchased from Marvel. While Sam Raimi's Spider-Man trilogy was a hit with fans, Sony wanted a new set of Spidey films for a younger audience, leading to the release of the Amazing Spider-Man and its sequel. Those films were supposed to be just the beginning of something bigger and bolder for Sony, and Sony had plans for an entire Spider-verse of films featuring Venom and the Sinister Six, and tertiary characters like Black Cat and Silver Sable. But the original plans for more Amazing movies were abandoned when Marvel and Sony agreed to share Spider-Man ahead of the production of Captain America: Civil War in 2015. Not only was Spider-Man’s ballyhooed debut in Civil War well worth the wait, however, it also led to a brilliant new Spider-Man film in Homecoming.

Seeing this as a sign that there is still an audience for a Spider-verse, Sony moved ahead with a Venom film. Though Venom has yet to be released, Sony is confident in its own pocket Marvel Universe: Just this month, Variety reported amended plans for Black Cat, Morbius, Silk, Jackpot, and Nightwatch films. That's also not including this holiday's animated Spider-Man: Into the Spider-Verse, which is its own special entry. We’ll have to wait and see whether or not Sony’s future plans for a shared Spider-Man Universe can survive Venom’s tenure in theaters and actually take on Marvel.

The idea of a shared world among films was a risky gambit, and one that paid off stupendously for Marvel Studios. With 2018’s Black Panther pulling in $700 million stateside right along with Infinity War's $675 million (and climbing), it doesn’t appear Marvel will be stepping down from the top of the mountain any time soon. There’s no telling what the next bold move in cinema will be, but right now it’s still trying to follow the blueprint established by the Marvel Cinematic Universe and the Earth’s Mightiest Heroes, The Avengers.