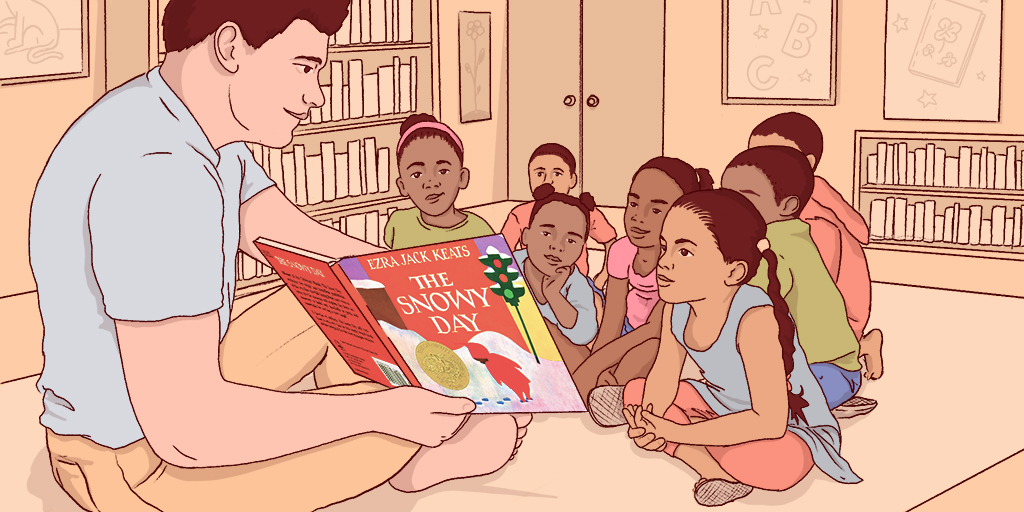 The year was 1962. John Glenn had become the first American to orbit the earth, and President John F. Kennedy had petitioned Congress for $531 million to put a man on the moon by the end of the decade. The US government was in the height of the Cuban Missile Crisis, the Bay of Pigs still fresh in everyone’s memory. And the United States was in the throes of the Civil Rights Movement.

From the murky depths of this dynamic time rose an unlikely beacon of hope from an unassuming hero. Today, over a half-century later, we look back on 1962 as a pivotal year in media and literature, as it was the year that Ezra Jack Keats’ "The Snowy Day" was published and released by Viking Press.

"The Snowy Day" was a landmark children’s book. Its main character, Peter, a cute young boy sporting a now-iconic red jumpsuit, was Black, and up until 1962, no African American child had ever been the protagonist of a full-color American illustrated book. Jim Crow had made certain that the legacy of slavery remained alive and well, and those efforts carried into music, film, and literature. It’s not that there were no Black protagonists—it’s that the few protagonists were all caricatured versions of African Americans: Mammies, Sambos, and Uncle Toms abound. "The Snowy Day" was a pivotal book because it featured a Black child in the same light that children of all other backgrounds and ethnicities had been regularly featured.

Ezra Jack Keats grew up poor and Jewish in tenement housing in Brooklyn, New York. He remembered the thrill of snow days as a child—going to bed to clear streets and sidewalks, waking up to a white blanket of snow coating treetops, cars, and roofs. By 1962, Keats had done illustrations on more than 30 different children's books, and he and his co-author Pat Cherr had even put out their own book "My Dog is Lost!" which featured minority children. In his studio, Keats had a 1940 edition of Life Magazine that featured photos of an African American boy, photos he had been absorbing in that studio for over two decades. When it came time to do his own project, Keats knew that it would feature an African American boy.

The brilliance of "The Snowy Day" wasn’t in its timeless illustrations, the simplicity of the storyline or the relatability it carried. It wasn’t even the fact that the story took place in world-famous Brooklyn. The impact "The Snowy Day" had was in the simple humanity granted to Black children everywhere as they got to watch a protagonist characterized by his curiosity, his youth, and his excitement over a snow day—and not by his Blackness. Everyone has been curious, everyone has been young, and everyone has been excited over a snow day. By not focusing on young Peter’s race, Keats avoided casting Peter as “other,” and instead invited the rest of the world to view him as human, an unfortunately necessary yet revolutionary act.

Add the fact that Keats himself was a white American and you get a second layer of significance to the children’s book: white Americans, then and unfortunately still today, at their most benign ignored Black stories, and at their most severe sequestered, hid, or destroyed Black stories. Most viewed the responsibility of representation for Blacks as falling on Black people. Ezra Jack Keats, on the other hand, had been on the receiving end of discrimination growing up Jewish and poor.

The reality of oppression and the need for representation, for Keats, wasn’t “their” story—it was deeply personal, and led to Keats's decision to feature an African American protagonist.

The Legacy of "The Snowy Day"

"The Snowy Day" continues to be wildly popular—and for good reason. It received the Caldecott Medal in 1963, and the protagonist Peter went on to be featured in many other children’s tales, including Whistle for Willie, Peter’s Chair, and Pet Show! The New York Times recently released their list of the 10 most checked out books in New York Library history and "The Snowy Day" was at the top of the list. Since its release, "The Snowy Day" has sold over two million copies globally and has been translated to more than 10 languages. There have been several screen adaptations, including Amazon’s recent Emmy-winning adaptation "The Snowy Day" that features Laurence Fishburne and Regina King.

There’s still much work to be done in representation in media for all ethnicities, but especially for African Americans. Now more than ever, with the tools of the internet granting access to African American culture and stories worldwide, we can see how much the world not only accepts African American stories but embraces and craves these stories. Through streaming music services, rap music has recently surpassed rock as the most widely listened to music genre on earth. In 2018, Marvel’s Black Panther became the highest-grossing solo superhero film in history, grossing more than $1.3 billion globally. African American narratives aren’t just inspiring—they’re highly lucrative.

Still, there’s work to be done, and it begins with telling more stories, sharing more stories, and providing spaces and resources for stories to be told. This month, we’re thankful that Ezra Jack Keats told Peter’s story.