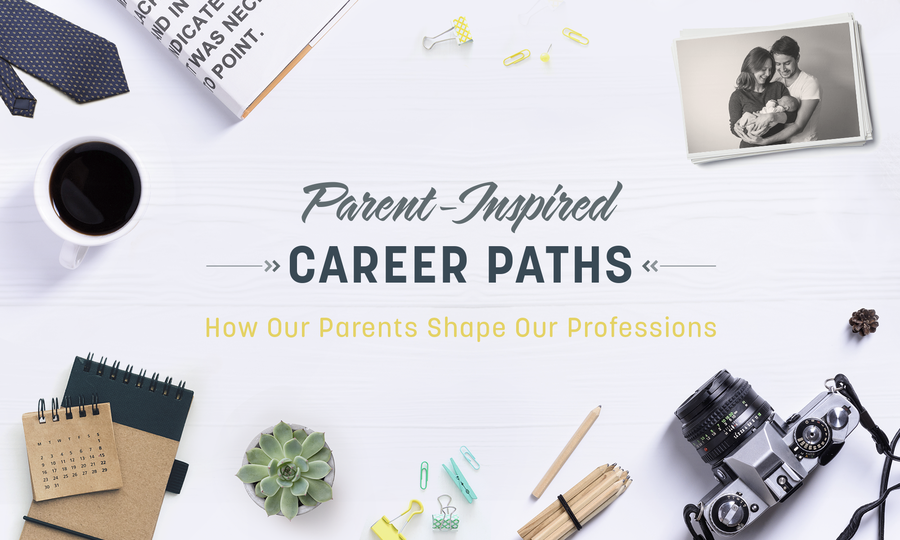 With Mother's Day and Father's Day right around the corner, and the graduating class eager to join the workforce, we were curious about the role parents play in their child's journey through the job market. To discover the ways our parent's influence our careers, we surveyed over 1,000 employed people who grew up with at least one biological, step-, foster, or adoptive parent. Continue reading to see what we learned.

American parents, give yourself a hand. You've taught your children the value of hard work! Working hard was the No. 1 skill our survey participants said they learned from their parents, with 66.1% picking it up from their mom and 76.9% learning it from their dad. Responsibility followed closely, taught by 65.9% each of mothers and fathers.

The skills people most attributed to their mother were kindness, communication, empathy, and creativity. In fact, kindness and empathy were overwhelmingly more likely to be learned from mothers than fathers. While they're harder to measure objectively, these qualities are only getting more important in the workplace as time goes on. Emotional intelligence, which is defined as "the ability to identify and manage one's own emotions, as well as the emotions of others," is increasingly valued in the workplace. In fact, 92% of employees think empathy and emotional intelligence in the workplace are taken for granted and not stressed enough. Looks like listening to your mother could get you ahead in today's working landscape.

On the other hand, our survey participants definitively associated commitment, discipline, and resourcefulness with their father as opposed to their mother. These more traditional elements are evergreen when it comes to professionalism and getting the job done.

In America, 27% of mothers stay home to raise their children full time. When compared to working mothers, stay-at-home moms were more likely to impart creativity, resourcefulness, and trustworthiness to their children. On the other hand, 70% of mothers with children under 18 work, and in our survey, their children reported learning ambition, financial management, and teamwork. All of these skills are invaluable to working and living in the world today. Motherhood is, of course, a job in and of itself. In one survey, working mothers reported working an average of 98 hours per week (14 hours a day) when taking into account both their professional and at-home labor. It would be hard not to learn ambition as the child of one of these superhero moms.

When it comes to single parents, children also learn unique lessons that serve them well when they grow up. Of single parents, 82.2% are mothers, and the remaining 17.8% are fathers. Our survey reported the lessons taught by single mothers that stuck were those relating to ambition, creativity, and leadership, whereas single fathers appeared to emphasize resourcefulness, communication, and discipline. These insights into different families help us to celebrate all parents, regardless of the home structure. Every situation a child grows up in teaches them unique skills, which contribute to their future when they hit the job boards and begin writing their first resumes.

Value of Inspiration: Result of Influence and Satisfaction

Parents encourage their children to succeed in life, sometimes by dreaming big, and other times, by emphasizing the practical. Some parents inspire their kids to follow in their footsteps, perhaps by working in the family business or learning a specific trade. In the opposite case, many parents want a brighter future for their family and push their children to aspire to high-paying occupations like medicine or law. How happy the children in either scenario end up is sometimes a different story.

Our survey suggests that people are happiest with their jobs when their parents inspired them to take on career paths similar to their own. Of survey participants whose mothers inspired them to follow in their footsteps, 52.8% reported feeling extremely or very satisfied with their jobs. The least satisfied survey participants reported their parents did not influence their careers at all. In general, parental influence correlates with satisfaction in our study, in the case of both moms and dads.

Our survey also tracked the material results of parental influence: Those who said their fathers had no influence at all on their careers made $5,000 less annually than those whose fathers did have an influence. So parents, for the happiness (and eventual income) of your children, don't be afraid to nag them.

Now that we've looked at job satisfaction and the qualities that we learn from our parents, it's time to get to the nitty-gritty – what jobs are people working? It turns out that the specific job your father or mother has can influence your career. For example, almost a third of our participants who worked in transportation and warehousing had fathers who were also in that industry. However, only 1.6% of people in the arts had fathers in the same field.

Not everyone who works is satisfied with their job – we've all been there. Our survey included a section that compared people's job satisfaction to the amount of pressure they felt from their parents to go into certain fields. This particular section of the survey is a world of contrasts and shows very different effects coming from maternal versus paternal pressure.

How comfortable are you discussing work with your parents? Is your job a source of pride, or are you waiting until you hear back from potential employers before you let mom know what you're currently doing? It turns out that 44.5% of people who said their parents completely or mostly respect their career were extremely or very satisfied with their job.

Following this trend, 51.9% of those whose parents didn't respect their career were dissatisfied. It would seem parents and their children are more likely to agree on negatives than positives, but in extreme cases, they mostly align.

The respect of parents for their children's careers also directly correlated to the material reality of said careers: The median annual income of people whose parents respected their career was $50,000, whereas those whose parents did not respect their career had a median income of $34,000. Those who felt their parents completely or mostly respect their work earned a higher income than those who perceived their parents as not at all or slightly respecting their line of work.

Parents always influence their children, whether they intend to. Not all of these influences are positive, but even negative ones can teach children about how to live their lives and enter the workforce.

Sometimes, a strong negative example can turn a child toward a positive path, whereas not enough discipline and too much freedom can be a mistake. Sometimes, it's only upon reflection many years later that we realize the ways in which we learned from our parents or were shortchanged valuable lessons that other kids took for granted. No family is perfect, but perfection is never necessary for living a fulfilling life, and the greatest lessons can be learned from adversity.

Celebrate Family With Some Quality Time

This Mother's Day and Father's Day can be an opportunity to reflect on the unique relationships parents have with their children and the love that fuels these bonds.

DIRECTV helps make these family times really count. Family classics along with new releases can get everyone together to make the most out of the holidays. After unwrapping gifts with mom or dad, there's nothing like a relaxing afternoon on the couch with everyone's favorite movie to celebrate the holidays.

We surveyed 1,004 people who were employed on a full-time, part-time, or self-employed basis, including military personnel. To qualify for this survey, people had to have been raised by at least one parent, whether that was a biological, step-, adoptive, or foster parent. We conducted our study using Amazon's Mechanical Turk platform.

We excluded outliers from reported income that were greater or less than three times the standard deviation plus the mean.

All industries with fewer than 26 respondents were grouped into the "Other" category.

We did not conduct any statistical testing on our findings, so the results are based on means alone.

Since the survey relies on self-reported data, some respondents may have exaggerated, minimized, or telescoped their answers.

Join us in celebrating Mother's Day and Father's Day by sharing this article with your friends and family – as long as it's for noncommercial use! Please link back to this page to give proper credit to its creators.