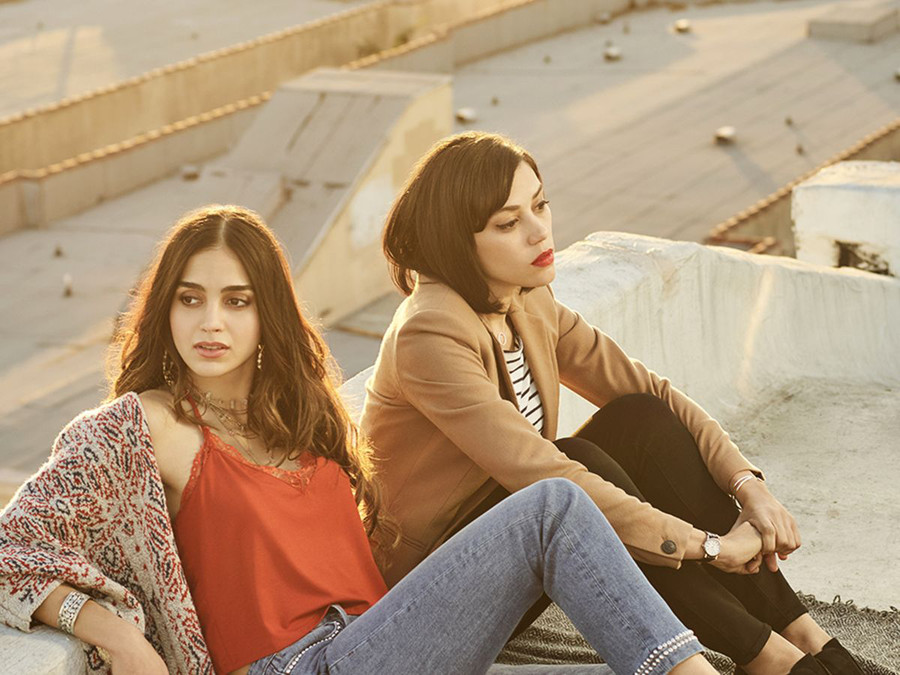 How Starz Is Making History With Its Addictive New Latino Show, Vida

In the first two episodes of Vida, flan is its own character. In the pilot, sisters and main protagonists Emma (Mishel Prada) and Lyn (Melissa Barrera) attempt to ice out their recently deceased mother’s partner, Eddy (Ser Anzoategu), by turning down her offers of homemade flan. There’s no time for flan for the career-obsessed Emma, and boho, gluten-free Lyn must say no. But by episode 2, Emma is surveying the table stacked with the glistening, succulent desserts of her childhood and asking: “Is that flan still good after two days?” Eventually, she lets go of her grievances and takes a bite. After a few longing looks of her own, her sister Lyn picks up a fork, says “Fuck it,” and digs in.

As a Latina viewer watching the scene, it was immediately clear that the moment wasn’t just starring a Latinx cast — a rarity in itself — but that it also had to have been created by people who are Latinx. It's not every day that a traditional dessert from Latinx culture becomes a plot point on a major TV show. And that authenticity isn’t just limited to those scenes; it’s present throughout the entire series. From the unapologetic Spanglish sprinkled throughout the dialogue without a single subtitle to the way the camera poetically captures the rich caramels and chocolate browns of the characters’ skin tones, Starz is gearing up to air the most authentically Latinx show to ever hit premium cable television. And what's even more impressive is that the network was able to do it with an all-Latinx cast, an all-Latinx writer’s room, a majority Latinx crew — and a queer Latina showrunner. With just six episodes, Vida is making history —and proving to Hollywood that truly diverse, authentic entertainment can be done.

Things have been looking up for Latinos on television as of late. Jennifer Lopez is the star of NBC's Shades of Blue, and Jane The Virgin and its mostly Latinx cast has been a fan-favorite for four seasons. Netflix’s Orange Is The New Black stars many Latinx actors, and the streaming service’s series One Day At A Time — with a Latinx cast helmed by a Latina showrunner — was recently renewed for a third season. Still, USC’s Annenberg School for Communication and Journalism reports that in 2016, only 6% of roles on television featured Latinos — even though we make up 17% of the country.

Marta Fernandez, Senior Vice President of Original Programming at Starz, believes that the root of the disconnect lies in a lack of effort from the gatekeepers in powerful positions. That awareness is why Starz has long been ahead of its competitors when it comes to diversity. The juicy drama Power, with a starring cast that’s Black, Latinx, and white, is run by a Black woman, Courtney Kemp, and has consistently broken Starz’ premiere night records for four seasons.

"We have the talent and the resumes, but we need to be trusted and let in to the doors of Hollywood."

So Fernandez and the network were prepared to go the extra mile for Vida, which started as a simple idea from the network to create a Latinx-focused show on the concept of “gentefication” — the gentrification of old school, established Latinx spaces by younger Latinx people or businesses. (Think juice bars replacing decades-old taquerias.) It's rare that a network has an idea for a show and then works to make it happen, versus fielding ideas from writers and executives. But Fernandez says that after the success of their minority and women-focused series like Power, and women-led historical fiction dramas Outlander and The White Queen, the network was committed to creating authentic programming for underserved audiences. "The success of our show Outlander proved that if you put out shows for a specific audience, they will come to it," she says. But Fernandez also knew that to create a series that felt Latinx, they needed creatives who were Latinx.

“We found that there are a lot of Latino actors and writers, but they haven’t had the opportunity to move up through the ranks. The pool is very wide, but not very deep when it comes to finding talent with experience,” Fernandez says. “A lot of these Latino writers and actors are kept to lower rung positions, especially in writing rooms where they’re often seen as ‘diversity hires.’ So while we found a great amount of people to put in a writer’s room, we had trouble finding someone who was experienced enough to run a show.”

Enter Tanya Saracho, a noted playwright who has also written for series like How To Get Away With Murder, Girls, and Devious Maids. She had never run a television show before — much less one on premium cable — but that didn’t stop Fernandez from calling her in to talk about her idea. Saracho is now the first Latina ever to run a premium cable television show.

“Starz took a chance on me,” Saracho says. “It’s the same thing with our cinematographer Carmen Cabana. She had never led an entire camera unit before, so who was ever going to give her a chance? But we did, and it paid off beautifully. We’re here. We have the talent and the resumes, but we need to be trusted and let in to the doors of Hollywood.”

Saracho is immensely proud of her team, which includes Narcos veteran Cabana — whom Saracho says was determined not to whitewash Vida’s skintones the way mainstream TV shows often do — casting director Carmen Cuba, and composer Germaine Franco, who also worked on Coco and is the only Latina in the Recording Academy.

“We wanted to create our own little world that would feel like a family, one where we could code switch — not just in Spanish but also culturally,” Saracho says. “Because we all had shared experiences, it was like we had a shorthand. When I told Germaine that the music in one scene that featured a limpia[spiritual cleaning] needed to feel more indigenous, she immediately knew exactly what to do. I’m not sure that conversation would have been so clear and easy if she hadn’t been Mexican.”

The writer’s room itself is all Latinx, but also diverse, including writers of Mexican, Afro-Caribbean, and white South American descent, a move Saracho felt was important to ensure that the show features “many perspectives of Latinidad.” But there are also multiple queer characters and storylines (an early plot twist leads sisters Emma and Lyn to find out that their mother’s roommate, Eddy, played by non-binary actor Ser Anzoategu, was much more than just their late mom’s friend). Saracho, who identifies as queer, wanted to make sure those nuances also felt just as authentic. Her final writer’s room was nearly half queer, including head writer Nancy Mejia, whom Saracho reached out to via Facebook after coming across a pilot she had written. Vida is now Mejia's first TV writing gig.

“I myself am a brown, queer woman, so for me it was very important that we didn’t just give queer storylines lip service or do it for optics,” Mejia says. “Authenticity starts with the hiring process. The fact that about half of us in the room are queer, and we each have our own distinct story and narrative, that translates on screen. We’re definitely challenging the status quo, and I hope we prove to Hollywood to not be afraid to take a risk. Because this isn’t a risk at all. If you look at the demographics of this country — especially a city like Los Angeles — including Latinos is not a risk, it’s smart.”

As casting director, Cuba helped Saracho build her Vida family, which is made up entirely of rising Latinx actors like Anzoategu, whom Saracho discovered after attending a play in Boston, and Melissa Barrera, who expertly plays the wide-eyed, ditzy, yoga-loving Lyn and landed the part just three weeks after moving to L.A.. Headstrong workaholic Emma is portrayed by Mishel Prada, an alum of Fear The Walking Dead, who joined the Vida cast just one week before they shot the pilot after another actress dropped out.

“I had seen an announcement that Starz had greenlit a show by a female, Latinx showrunner a year before I got the call to audition,” Prada says. “So to actually now be a part of a show that’s not depicting us as maids or feisty stereotypes but real, three-dimensional, rich women with flaws and vulnerability...that’s not just an honor, it’s history.”

Barrera adds that Vida isn’t actually that different than anything we’ve ever seen on television. It just so happens to feature Latinx actors, culture, and voices.

“My character Lyn is a millennial woman, a carefree party girl who’s in on the trends, who wants to find love and is looking to be loved,” Barrera says. “Yes, she’s a Latina who’s often torn between not feeling Mexican enough and not feeling American enough. But at the end of the day, she represents the typical American girl. That’s what’s so beautiful about Vida: Whether you’re white or Puerto Rican or Chinese, anyone who watches this show can see a little bit of themselves in it.”

Vida is sure to capture the hearts of viewers and be another fan favorite from Starz, which is quickly becoming a destination for cult-favorite shows like Power and Outlander. It may even win some awards. But perhaps it’s most impressive feat is simply its existence. And next?

“I want Vida to open doors for other cultures to share their real, authentic, complicated stories,” Saracho says. “I hope one day there’s a Dominican Vida! A Chilean Vida! A Puerto Rican Vida! There’s room for all of us to tell the world who we are, because really, we all just want to be heard.”

This article was written by Arianna Davis from Refinery29 and was legally licensed through the NewsCred publisher network. Please direct all licensing questions to legal@newscred.com.