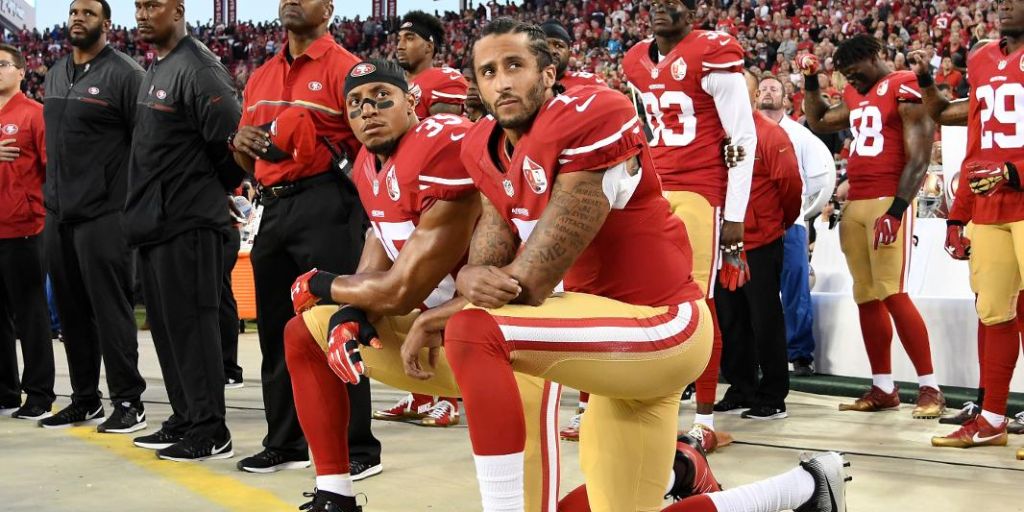 If You Plan To Take A Stand Like Colin Kaepernick, Be Prepared To Pay A Similar Price

I took my son to his first NFL football game in September of 2017.

The Detroit Lions hosted the Atlanta Falcons at Ford Field in front of 65,000 people. Both teams were 3-1, and my seven-year-old could hardly contain his excitement.

As the national anthem started, a familiar script changed. Rather than respectful silence, the crowd reigned jeers at the field like a villain was entering the ring at a wrestling event.

On the sideline, Detroit Lions players locked arms with eight taking a knee in the middle of the line. Those eight awkwardly knelt directly in front of a color guard patiently holding up American flags.

We were surrounded by fans shouting the players down with opinions not fit for print. From the row in front of us, a man shouted, “If you don’t like it here, move to Canada and play hockey!” Others sided with the players and several fights nearly breaking out.

Three minutes left a stink that didn’t wear off for the rest of the game.

The scene at Ford Field could be traced back to a peaceful protest by San Francisco 49er quarterback, Colin Kaepernick.

During the preseason of 2016, Mr. Kaepernick quietly started kneeling while the stadium stood for the national anthem.

As fans and reporters took notice, Kaepernick expressed his intentions to draw attention to social injustice.

The move was predictably polarizing.

Kapernick was two years removed from a Super Bowl appearance and was still considered one of the game’s bright young stars. He was a dual-threat quarterback with elite speed and a strong arm, the kind of weapon that puts tremendous pressure on an opposing defense.

As the protests became front-page news, Kaepernick became the face of the movement. Talking heads shouted at each other on cable news. The topic dominated social media.

Once the President weighed in on the topic, the game of football had become a full-on political circus.

Unlike Fox News or CNN, the NFL is not a business that profits off politics. The average value of an NFL team is $2.86 Billion with the aggregate value topping $90 Billion. Many of the NFL’s customers watch the game to escape from divisive politics.

The 49ers asked Kaepernick to opt out of his contract after the 2016 season, and he has not played in the NFL since.

One of my peers at a Fortune 500 company hosted an annual customer dinner. He brought twenty customers together as a sign of appreciation and opportunity for the group to network.

After giving a short pitch, this sales rep asked the group to bow their heads while he said a prayer. This is how he kicked off every customer dinner for twenty years.

One time, a customer took exception. Feeling uncomfortable, this customer excused himself from the dinner and called this person’s manager.

When approached, the sales rep was incensed. It was a simple prayer. How could anyone be offended? He wasn’t making anyone pray. If someone didn’t practice his religion, they could bow their head in silence.

He claimed that he had freedom of religion as an American and planned to continue to lead his dinner with a prayer.

This individual confused his constitutional rights with his fiduciary duties to the company who employed him. Employees are paid to attract customers, not repel them.

This individual’s manager reminded him that the customer he offended worked for a company that spent millions of dollars on our equipment. He went on to remind him that his company paid for this dinner with profits from customers like him.

He would cease praying at this company-sponsored event, or he would be terminated. This ultimatum ended the debate, and the prayer was absent thereafter.

I have a contract with Forbes as a contributing writer. In this contract, Forbes makes it clear that I have a right to my opinions, so long as those opinions do not alienate customers or tarnish the Forbes brand.

Taken directly from my contract with Forbes, “We recognize it is your right to say what you want, when you want, in any way, on your own social media accounts. But keep in mind that as a contributor to Forbes, you carry the banner and reputation of our brand and there may be consequences if we believe you are harming our brand.”

In other words, my value is in attracting customers, not pushing them away. Fail to do the former or encourage the latter, and I will no longer work for Forbes.

Cleveland Browns safety Jermaine Whitehead learned this the hard way when he was summarily released from the team following multiple Tweets attacking Browns fans. Whitehead forgot that he was paid to attract paying customers, not threaten and drive them away.

Are Your Personal Convictions Worth Your Career?

The NFL has arranged for a private workout with Kaepernick in Atlanta this Saturday, with invitations sent to all 32 teams.

Is Kaepernick’s physical ability really what is at question? In his short career, Kaepernick passed for 12,271 yards, rushed for 2,300 yards, went 4-2 in the playoffs and has the sixth best touchdown-to-interception ratio in NFL history.

Are we to believe Kaepernick could not perform better than Mason Rudolph’s four-interceptions and 21 incomplete passes for the Pittsburgh Steelers against the Cleveland Browns on Thursday night?

This decision is about risk and reward. Is Kaepernick’s upside as an employee great enough to risk alienating a portion of an NFL’s fan base?

The argument that Kaepernick had a platform and was somehow obligated to use it for his cause doesn’t hold much water. He was an employee of the 49ers, not the owner.

Picturing working for an insurance company and you are given an opportunity to speak at a large conference. Rather than speaking to advance your company’s interests, you take the microphone and make an impassioned pitch for your favorite Presidential candidate.

Half of the audience is disgusted, a few are delighted, and the rest are annoyed that you selfishly stole the forum to advance your agenda. In most scenarios, you are shown the door by your employer.

Would any manager in attendance be interested in hiring you after seeing your act of rebellion?

Or, imagine that you land a job as a guitarist for Ed Sheeran’s tour. Halfway through a show, you hijack the microphone and vigorously debate the merits of strict border laws. You had the platform, and felt the need to use it.

In essence, you spoke on behalf of Ed Sheeran, who has much more to lose than you. Whether the crowd agrees or disagrees with you is irrelevant. What matters is that you alienated some of Ed’s customers without his permission.

Would Ed Sheeran or any other musical act hire you to perform in a future tour?

This is the question NFL teams are pondering. Kaepernick was an employee in a company, hired to entertain and attract more fans. He used the platform that his company gave him to further an agenda with financial repercussions to his organization, against that organization’s direction.

Will any NFL team hire Kaepernick knowing this?

With an election year looming, emotions will be high on many divisive topics. You have a right to your opinion. But, understand that your Constitutional rights and rights as an employee are very different things.

Taking a polarizing stance in the office may have consequences should your opinions offend customers, employees, or have a deleterious impact on your company’s brand or profits.

A company will do what is in the best interest of the company, not your convictions.

To follow Ian’s regular newsletter on leadership, career growth and management, connect with him at 5on4.group.

This article was written by Ian Mathews from Forbes and was legally licensed through the NewsCred publisher network. Please direct all licensing questions to legal@newscred.com.