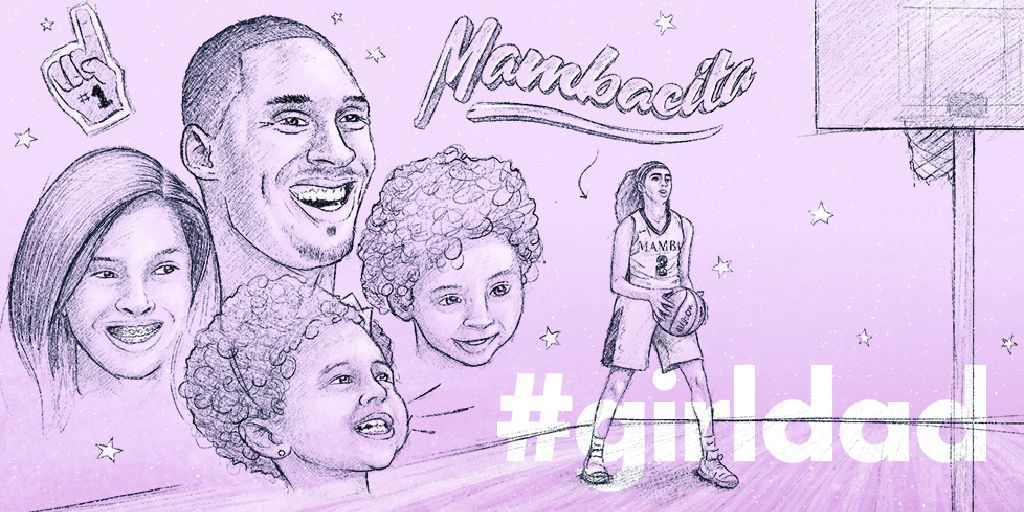 “I know a girl. She puts the color inside of my world. But she's just like a maze, where all of the walls all continually change. And I've done all I can to stand on her steps with my heart in my hands. Now I'm starting to see, maybe it's got nothing to do with me.”

Those are the opening lyrics to Daughters, from John Mayer’s 2003 album Heavier Things. 2003 was also the year Kobe Bryant became a dad. Kobe might have been fourth on the NBA all-time scoring list, but he was just as proud of the accomplishment of being a dad to four daughters.

A few weeks ago, in the days following Kobe’s unexpected death, SportsCenter anchor Elle Duncan shared a touching story about Kobe's love for his girls. The two talked about whether Bryant and his wife Vanessa, who had three daughters at the time, wanted to try for a son. "I would have five more girls if I could. I'm a girl dad," Bryant said. Since this anecdote was revealed, the hashtag #girldad has taken over social media.

The moment inspired a flood of dads to pay tribute to the late basketball legend by celebrating their relationships with their daughters. It also put a renewed spotlight on Kobe’s second act of life as a dedicated father and business person. But becoming a girl dad didn’t happen overnight.

The evolution of Kobe

Kobe was drafted by the Charlotte Hornets (and subsequently traded to the LA Lakers, where he spent his entire career) as the 13th draft pick in 1996 at age 17. His parents had to cosign his contract because he was still underage at the time.

The ability to join the NBA right out of high school was such a controversial policy that it was changed in 2005 when the NBA commissioner declared that he wanted to get professional scouts out of high school gyms. The theory at the time was that this was done to encourage athletes to mature slightly and focus on foundational education as a platform for future stability.

Meanwhile, work ethic on the court was already preparing Kobe for life off of the court. He studied tape of his previous games, and after one particularly poor performance, he went straight to a high school gym to practice his shot in the middle of the night. If Kobe learned anything, it was that when you make mistakes, you get back up. And then you work harder than anyone else to overcome your failures. For anyone who's been a parent, you know that it's essentially a marathon of mistakes.

It’s been said that nothing can prepare you for parenthood. The responsibility, the pressure, the expectation, the obligation.

There’s also nothing that could prepare you to be the daughter of one of the most celebrated NBA players of all time. Gigi “Mambacita” Bryant embraced the role, frequently reminding journalists and TV reporters that her father’s legacy was safe under her tutelage.

But Kobe often spoke of how he loved being a dad to girls, and famously coached his daughter Gigi and teammates at Mamba Sports Academy. Many expected Bryant to wish for a son to carry on his legacy in the NBA. After all, who would carry on Kobe’s legacy? But Kobe backed up Gigi at every turn, most notably during an appearance on Jimmy Kimmel Live!

"The best thing that happens is when we go out and fans come up to you, and (Gianna) is standing on the side, and they're like, 'You've gotta have a boy, you've gotta have someone carry on the legacy.’ She's like, 'Oi! I got this!' And I'm right, 'Yes, you do, that's right.'"

Inspiring a generation of #girldads

Like everyone, Kobe Bryant’s life isn’t defined by one thing. Unlike everyone, his life was scrutinized under a microscope. But over the years, Kobe Bryant evolved from a young and adventurous sports star to a mature and involved father. In life and death, his example inspired fans and fathers to show their #girldad pride and honor their relationships with their daughters. Gigi showed us what’s possible when fathers view daughters as worthy carriers of their legacy. And the tragic loss of them both compounds the loss of Mamba and Mambacita.