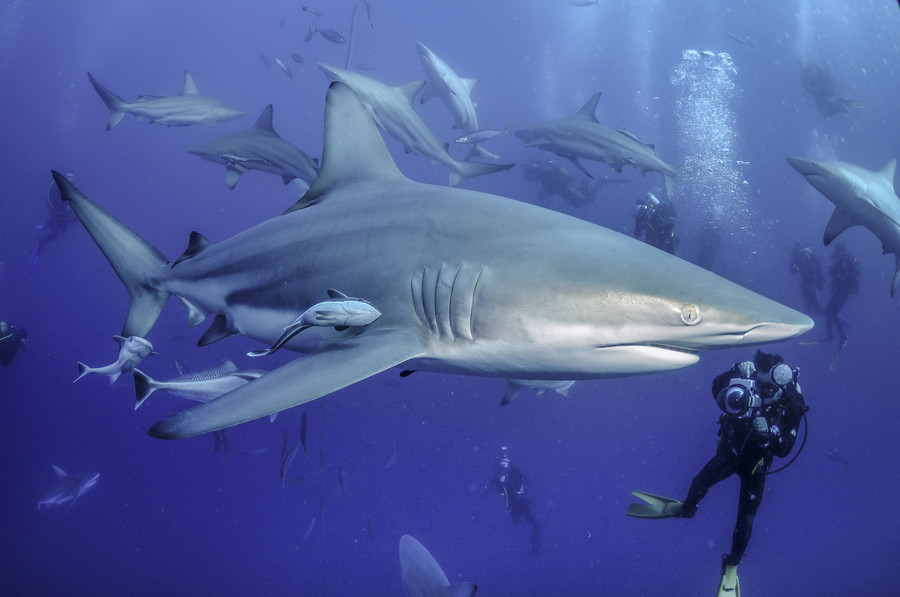 Impress Friends (and Terrify Seals) with these Shark Week Facts

Don't go in the water, and don't touch that dial, because nature's most perfect predators are heading back to airwaves.

Shark Week returns July 22-July 29 on Discovery, marking an incredible three decades as cable's longest-running event. The scientific (and, alright, often sensationalist) TV homage to these killers of the deep has been a ratings juggernaut since debuting in 1988. Tens of millions of viewers tune in each year to see great whites, hammerheards, makos and more – all from the comfort of the couch.

Beyond its TV audience, Shark Week is a cultural phenomenon. Stephen Colbert once described it as the second holiest annual holiday after Christmas. Even Tracy Morgan's character on 30 Rock espoused a philosophy to "live every week like it's Shark Week."

Before settling in to this year's 22 specials, impress your friends at your Shark Week viewing party with these bite-worthy facts.

Its Origin Is the Stuff of Legends

Like all the best stories, there are conflicting reports of how Shark Week came to be. There's the romanticized account executive producer Brooke Runnette told the Atlantic in 2012 about Discovery executives coming up with the idea for Shark Week on the back of a napkin after a boozy after-hours brainstorming session. Or there's the version where it was sarcastically brought up by an idealistic 20-something in the programming department in response to the network's desperation for larger summer audiences. Either way, someone smelled ratings blood in the water.

Shark Week got its first host in 1994 with Jaws author Peter Benchley. Since then, Nigel Marven, Dirty Jobs' Mike Rowe, Craig Ferguson, Josh Wolf, Eli Roth and more have served as official "M. Seas” of the event. The fifteenth anniversary of Shark Week in 1997 was dubbed "Celebrity Shark Week" and boasted appearances from Julie Bowen, Mark McGrath and Brian McKnight. It also featured volleyball and golf superstar Gabrielle Reece swimming with nurse sharks -- despite concealing from producers she was new to scuba diving. This year's Shark Week has Ronda Rousey, Shaq, Rob Gronkowski, Guy Fieri and more on deck.

The Recipe for a Bloody Good Time

All those dramatic shark attack reenactments require a lot of blood. Runnette shared the recipe for the perfect fake blood with NPR in 2012: Corn syrup, red food dye and chocolate syrup. (Feel free to use that at your next pool party!)

When Sharks Stop Being Polite and Start Getting Real

Although Shark Week features plenty of reenactments, there was no dramatization in 2003's special Anatomy of a Shark Bite. While filming, biologist Erich Ritter was actually attacked by a bull shark, resulting in the first ever shark attack captured on film. The shark took Ritter's calf muscle, and, even though he nearly bled to death, Ritter told the New York Times he chalked the attack up to stress, not malice, on the shark's part.

One of the most important developments in the history of Shark Week is the advent of the Phantom camera. Capable of capturing 1,000 frames per second, the high-speed camera is responsible for the most iconic scenes in Shark Week history: The breaching great whites of Air Jaws. The sight of the 2,000-pound predator rocketing skyward has inspired several spinoffs since first flooding airwaves with shark and awe in 2001.

Shark Week's official mascot is Chompie, a 446-foot long, inflatable great white that sometimes adorns the exterior of Discovery's Silver Springs headquarters. There's also Chompie, Jr., the kind of costumed mascot you might see cheering on a baseball team or traipsing around a theme park.

Lots of brands have gotten hip to the power of Shark Week. Previously, Shark Week has had tie-ins with Gillette, Priceline, Hot Pockets, Volkswagen and lots more. Dunkin’ Donuts served a Shark Bite donut in 2014 that featured red and white icing to resemble a life preserver. Lush Cosmetics created a tie-in with Shark Fin soap that benefitted a shark conservation documentary. For this year's 30th anniversary bash, Swedish Fish will be the official candy, Dairy Queens S’mores Blizzard will be the official frozen treat and Southwest Airlines will roll out a five-aircraft fleet featuring custom shark artwork.