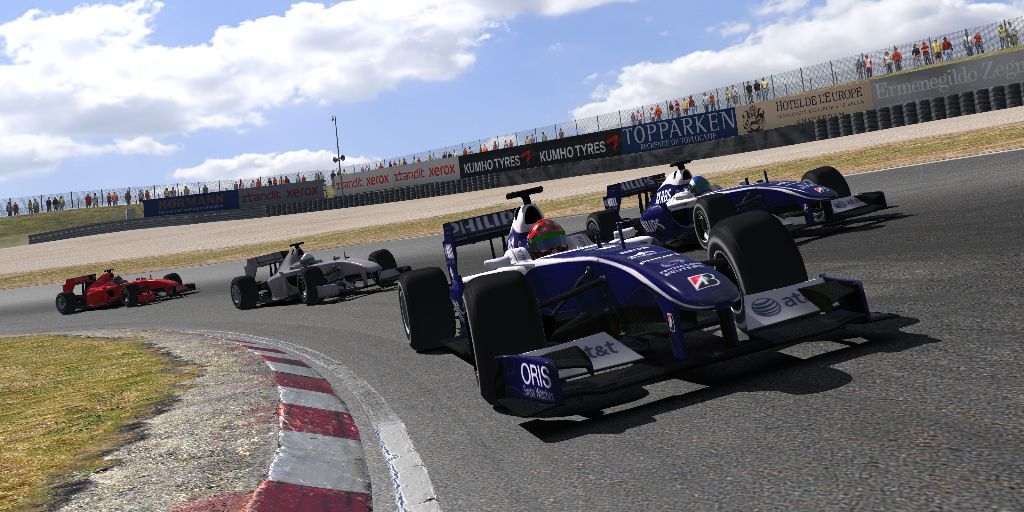 CHARLOTTE, N.C. (AP) — Seated inside a simulator in his living room, Denny Hamlin grew thirsty as he virtually raced some of his top rivals. He asked his one allowed crew member — his 7-year-old daughter — to get him a soda and she handed him a bottle of slightly shaken Coca-Cola.

Caution. Put the yellow out: Hamlin opened the soda and promptly sprayed his pants and the pricey simulator that cost him north of $40,000 to build.

It wasn't even the funniest moment from NASCAR's bold attempt to provide fresh content to a nation starving for sports.

NASCAR owns the popular iRacing Series and many of its younger drivers are considered among the best online racers in the world. They play against each other and strangers late into the night, fine-tuning the skills needed to land a big ride.

NASCAR is suspended until at least May 9 because of the COVID-19 pandemic so the series and iRacing created an invitational to give its drivers something to do. Fox Sports 1 jumped on board, 35 drivers agreed to participate and suddenly there was live sports programming on Sunday.

Yes, it was just a pretend race.

Sure, any kid with a couple hundred bucks could build a rig, buy an iRacing membership and would have been equally qualified to compete.

And it was a huge gamble for NASCAR, which rolled the dice with the event because it had the tools through its growing esports arm. The iRacing game is as close to reality as any professional sport can get because of the granular detail and precise rendering of each NASCAR track. The venues are laser-scanned to capture the bumps and imperfections in the asphalt, as well as duplicate the grandstands and billboards and pit lane.

"But iRacing's platform, this is something that really can gain a lot of traction simply because it's as real as it gets."

The Dixie Vodka 150 was at the virtual 1.5-mile Homestead-Miami Speedway, where NASCAR had been originally scheduled to race. The next event will be Sunday at Texas Motor Speedway, where NASCAR was scheduled to be, and the same drivers will again be invited to participate. Fox used Mike Joy and Hall of Famer Jeff Gordon to call the event and the network said Monday it is on board for the second round.

Television ratings are not yet in, but the numbers won't matter. What NASCAR pulled off in a week was a pick-me-up that united the sport and energized its bored fan base.

Some drivers had not virtually raced in years and had to rush to purchase rigs. Others were rusty or, in the case of seven-time NASCAR champion Jimmie Johnson, just not very good. Johnson crashed his virtual Chevrolet into everything possible on a simulator he usually uses to practice driving Indy cars and sports cars.

Many drivers used their social media channels to post pictures or stream their experience, and Alex Bowman live tweeted the event, including updates on eating a crustable, taking a bathroom break and finding his dog in his simulator seat.

NASCAR favorite Tim Dugger played an online pre-race show, the invocation was done remotely and recording artist Dylan Scott sang the national anthem while standing in front of what appeared to be his garage door in Nashville, Tennessee. Fox had a camera on Clint Bowyer as the in-race reporter, and he wasn't very good.

“Guys, I let you down. Heck, I let myself down. I let my fans down. I had sponsors in the stands, praying for a good showing, and I end up wrecking our Mobil 1 Ford Mustang,” Bowyer said on live TV. “I think the real takeaway is, obviously, I need a lot more practice.”

It was a pretty sloppy race and although Hamlin beat Dale Earnhardt Jr. coming off the final turn to win the 31st iRacing event of his career, NASCAR's superstars were not the show. This was instead a chance for the likes of Timmy Hill, Garrett Smithley, Ty Majeski, Chase Briscoe and Parker Kligerman. The little guys got some of the attention for a change — Hill was interviewed online by his wife after the race — and the fans loved every moment.

Hamlin has thrown himself into the project by organizing nightly practice sessions, setting odds for the race and encouraging his fellow drivers to participate. He was a Virginia short track racer big into gaming. He attended the Daytona 500 as Earnhardt's guest — a friendship born in the online racing community — before he signed a contract to drive in NASCAR.

Hamlin had not been on his rig for some time, but got the bug when everything came to a halt during the fight against the coronavirus. Plus, he saw it as an opportunity for the racing community to still create content for fans and sponsors.

Bowyer said it felt good just to have some fun during trying times.

“With everything going on in the country right now, I hope the fans were satisfied and I hope they got their minds off of things for a little bit,” Bowyer said. “We will be back.”

This article was written by JENNA FRYER from The Associated Press and was legally licensed through the NewsCred publisher network. Please direct all licensing questions to legal@newscred.com.