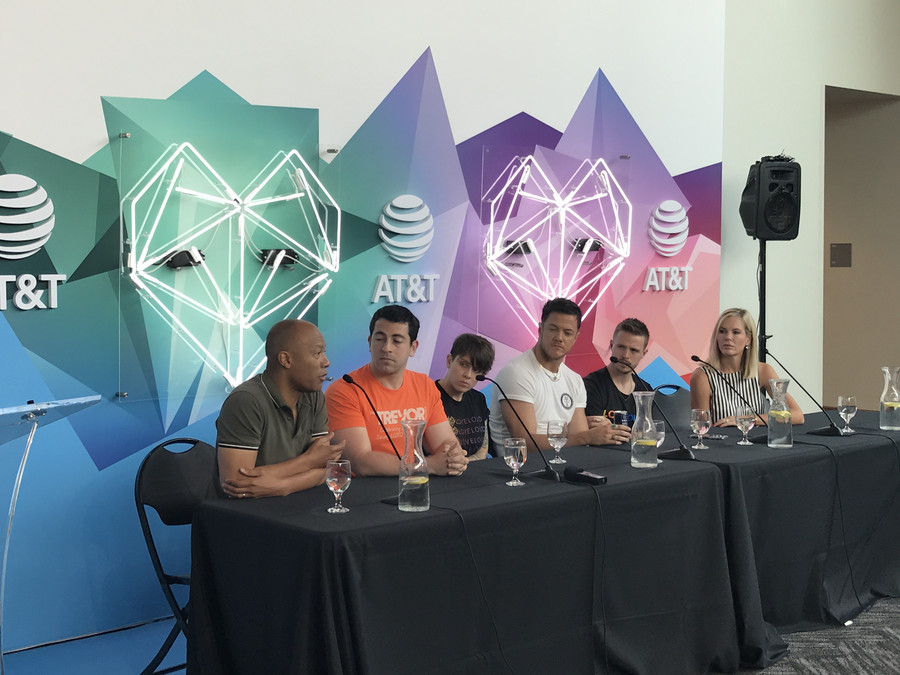 Inside the LoveLoud Festival: A Press Conference Gets Personal

The LOVELOUD Festival is dedicated to spreading messages of love and acceptance of LGBTQ+ youth to help prevent teen suicides in what seems like the most unlikely place: Salt Lake City, Utah.

As a member of the Mormon faith, the location is important to founder and Imagine Dragons frontman Dan Reynolds: He’s seen what happens to LGBTQ+ youth when they don’t get support and acceptance from their religious communities, and believes LOVELOUD can change that by providing a safe space to start conversations.

“Watching the video of @DanReynolds performing for 30,000 screaming fans at @LOVELOUDfest, it was impossible not to be struck by how far we’ve come, how fast our society has transformed, and how radically different our future will be,” writes @RobertGehrkehttps://t.co/hswK4XpgHn

The event featured performances from Imagine Dragons, Tyler Glenn, Grace Vanderwaal, Mike Shinoda and Zedd, raised over $1 million for charities, including The Trevor Project, a crisis and suicide prevention non-profit, Encircle, an LGBTQ+ family and youth resource center and the Tegan and Sara Foundation, which fights for equal representation of LGBTQ+ women and youth.

We caught up with the artists, influencers, and charities of LOVELOUD before the event to get their thoughts on the festival and the vital conversations around love and acceptance it’s igniting.

Dan Reynolds formed LOVELOUD after hearing the heartbreaking statistics behind LGBTQ+ suicide: It’s the second highest cause of death in young people in the U.S., and the leading cause in Utah. Gay, lesbian, and bisexual teens are four times more likely to commit suicide than their straight peers, and nearly half of all trans and gender non-conforming teens will attempt suicide sometime in their life.

.@DanReynolds has an important message for LGBTQ youth: "We need you. We love you. We accept you." #LOVELOUD https://t.co/FzVwpo1Ou5

The Trevor Project CEO Amit Paley explained that LGBTQ+ youth find themselves in crisis because “many of these youth feel like no one accepts them or loves them for who they are,” and added that, alarmingly, they’re seeing more and more LGBTQ+ youth in crisis.

Ken McNeely, President of AT&T’s Pacific Region, feels an obligation (as an openly gay man himself) to do what he can. “I think there is a role in this community to amplify love and acceptance,” he said. “We absolutely have an obligation to do that.”

“These kids need to be high school kids enjoying their lives and developing their hobbies, and instead, they are just trying to stay alive,” added Stephanie Larsen, Founder and CEO of Encircle Utah.

“One of the most powerful things about LOVELOUD,” added Paley, “is that LOVELOUD is sending a clear message to all LGBTQ people across this country that ‘you are not alone, you are beautiful how you are, and there are people who support you, and who see you for who you are and are proud of who you are.”

Igniting the conversation between LGBTQ youth and orthodox religions

The purpose of LOVELOUD is not to vilify religion; it's to encourage conversations between the religious and LGBTQ+ communities. Lance Lowry, Executive Director of the LOVELOUD Foundation, explained that they want to "create a safe environment where you can come and start talking and start listening."

"LOVELOUD is providing a space to start learning those tools and start having those conversations," said Tegan Quin. "And regardless of religion or not, it's a process. I still have faith that we can have this conversation, and over time, can transcend the differences we have."

endless love and respect for my dearest @teganandsara

Tegan has been fighting for equality for years. standing up to an industry and world that was intolerant and dismissive. and did it all with a smile, eloquence and endless patience. pic.twitter.com/K8Dz7oe6Rg

Dan Reynolds added that the goal isn’t to encourage LGBTQ+ youth to leave religion either, but instead, to make religion a safer place for them. “If you were to take a child out of their religious community or their home, you’re putting a kid who’s already at risk much more at risk,” he said. “It’s not the answer. The answer is, ‘what can we do to make that place safer for them?’”

“Just because they are LGBTQ doesn’t mean that they automatically don’t believe in their religion,” added Stephanie Larsen.

Amit Paley explained that “it is an extremely important message that LBGTQ+ young people know that you can be a person of faith and be part of the LGBTQ+ community. They are not mutually exclusive."

What it means to "LoveLoud"

We asked some of the artists and influencers at the event what it meant to them, personally, to LoveLoud and become an ally of the LGBTQ+ community.

Tegan Quin explained that to her, to LoveLoud means that “we’re in this together, and we care enough to stand in solidarity together and start to talk together. It can be any gesture that says, ‘I’m with you, I accept you, I love you.’”

Michael Milkanin, who performed a number from the musical Kinky Boots alongside Tyler Glenn, said that to LoveLoud “is to stand fully and 100% in the person you are today, in this moment, and say ‘this is me and I feel amazing.’”

“Love truly is something that I have seen change hearts,” said Tyler Glenn. “At the end of the day, that is my goal. To let people know we’re not too far from each other.” His advice to those who want to be an ally is “doing it with love and doing it without fear.”

“You should spend your entire life leaving your bubble as many times as possible,” Dan Reynolds said of learning to LoveLoud. “Spending time with somebody you’ve been told is not like you. You find very quickly that you are much closer than you knew, and that’s how to find empathy, that’s how you grow, that’s how you learn to love.”

“One of our largest goals,” said Lance Lowry, “is to take LOVELOUD it’s needed.”

Tegan Quin said that she’d like to see even more LGBTQ+ artists in the lineup to create an even stronger message to the world, adding, “There’s still lots to do and there are lots of people to reach.”

Dan Reynolds expressed, “This needs to be way bigger. That’s where we’re moving and that’s where it needs to go.“

“The ultimate goal is that we don’t have to have this festival,” Dan Reynolds explained. LGBTQ+ individuals, he says, don’t want to have “explain why they love who they love.” Reynolds added that, as a straight man, he’s “never had to truly explain and be judged for his sexuality,” and that one day, he hopes LGBTQ+ individuals won’t have to either.

“The successes in the meantime,” he said, “are these kids not taking their lives, not feeling oppressed. To change the culture. To destigmatize this so we can stop having these concerts.”

Stephanie Larsen added that “We want to make sure that every youth feels safe and respected for who they are, because they are beautiful, beautiful children who have so much to offer this world.”

When asked what’s changed since last year’s first LOVELOUD Festival, Lance Lowry shared, “Conversations are happening. It’s not something that’s being ignored anymore. We’re actually talking about it, and that is one big step.”

“People have felt safe to bring it up in conversation,” Tyler Glenn added, and Ken McNeely said that, “we still have so far to go, but we’ve also come so far.”