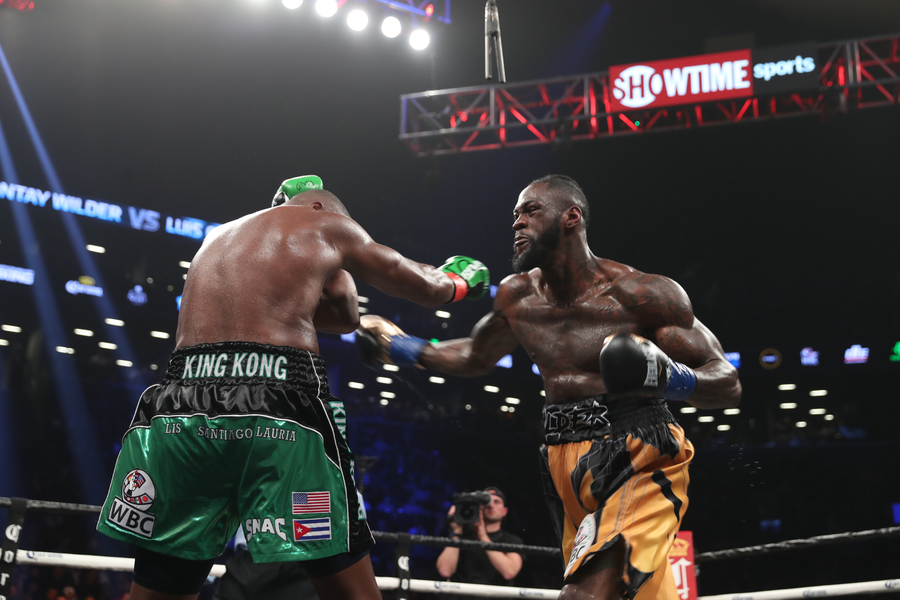 Anxious to climb back into the ring after scoring a draw in his wildly entertaining bout with Tyson Fury last December, undefeated WBC Heavyweight Champion Deontay “The Bronze Bomber” Wilder (40-0-1, 39 KOs) will take on 6’7” mandatory challenger Dominic “Trouble” Breazeale (20-1-0, 18 KOs) on Saturday, May 18th at Barclays Center in Brooklyn. Watch all the action live on SHOWTIME CHAMPIONSHIP BOXING on DIRECTV.

Wilder is coming off two epic fights. A slugfest with Cuban bomber Luis Ortiz last March in which Wilder was badly hurt in the 7th round, and the memorable tilt with Fury in December, in which many ringside observers felt Fury had outpointed the Alabama native. Yet Wilder’s exceptional power saved him on both occasions. Two crushing blows dropped Fury to the canvas in the ninth and twelfth rounds. Only his miraculous recovery late in the count salvaged the fight for the “Gypsy King”, and the bout was ruled a split draw. Wilder likewise shook off the cobwebs against Ortiz and scored a devastating multi-knockdown KO in the 10th round.

The Top-5 ranked WBC contender in the heavyweight division, Dominic Breazeale went seven hard rounds with heavyweight champion Anthony Joshua in 2016 before succumbing to the latter’s thudding jabs and crosses. But for many rounds he moved well, scored with jabs, and absorbed Joshua’s attacks. He actually opened the decisive seventh round with a higher tempo and a couple of scoring blows of his own. Breazeale is clearly a game fighter, with good size and strength, and will likely give Wilder more than many are expecting. He also typically fights in the 250s, while Wilder is significantly slimmer around 220. But both boxers have fight-stopping power. Combined the pair have knocked out 57 opponents in 62 fights. Both are also regulars at Brooklyn’s Barclays Center. Wilder will be making his fourth appearance at the venue, and Breazeale his third. In Breazeale’s last appearance there, in December, he KO'ed Carlos Negron with a devastating right in the ninth round. It was Breazeale’s third consecutive knockout since the Joshua fight.

But that isn’t the only reason to tune in Saturday night. Wilder and Breazeale have history. Rumors abound over an altercation that occurred in Birmingham, Alabama in 2017, after both fighters had fought on the same card. An exchange between Breazeale and Wilder’s brother led to a confrontation with Deontay later in the Westin hotel where both fighters were lodged. Since then, insults and threats have flown between the camps.

During the opening press conference for the fight, these bitter rivals both promised devastation. Clad in a tartan plaid coat with a pocket square, Breazeale called the WBO champ a “chump” and said he hoped Wilder would be able to pull himself off the canvas once they went, “leather to leather.” Dressed in characteristic black leather jacket and thick gold chains, Wilder reminded the assembled media that he tells opponents, “You have to be perfect for 12 rounds. I only have to be perfect for two seconds.” Wilder then vowed to, “knock this fool out.”

Whether Breazeale can withstand the Wilder bombardment remains to be seen. The champ’s signature looping, sledgehammer blows will be hard for Breazeale to fend off, but given the clear animus between the boxers, and Breazeale’s demonstrable heart and experience fighting Joshua, there are numerous reasons to believe this could be a thrilling confrontation between two ring giants. Plus, as a co-feature, the card includes the brilliant speed merchant and WBC Featherweight World Champion Gary Russell Jr. (29-1, 17 KOs), who will face off against former world champion Kiko Martinez (39-8-2, 28 KOs). The rugged Spaniard is known for seeking out the best competition he can find, has fought top featherweights including Leo Santa Cruz and Carl Frampton, and is on a four-fight winning streak coming into this bout. His showdown with Russell, Jr., promises plenty of high-octane punches in one of the most exciting divisions in boxing.