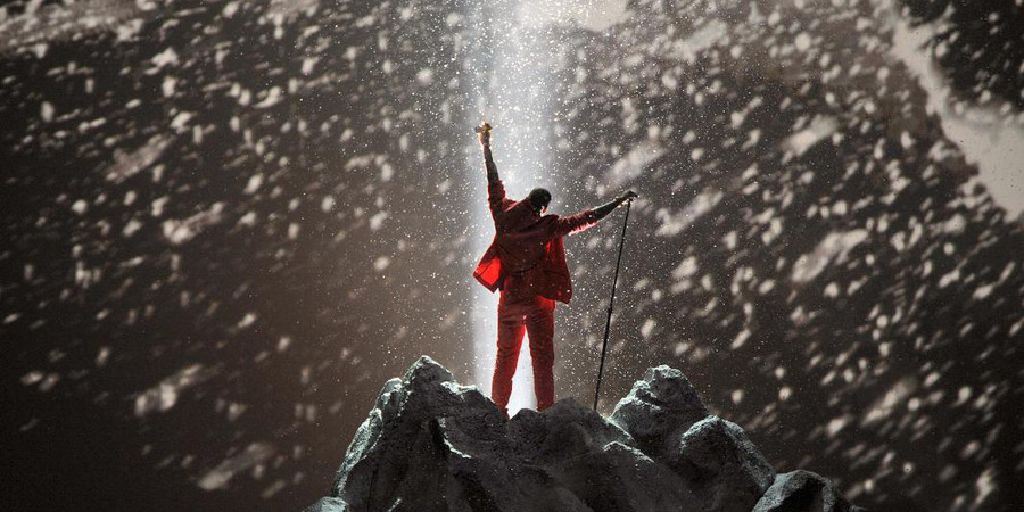 From the time Kanye became a top pop-culture presence (in 2004) to the end of 2008, he enjoyed most of the benefits of celebrity.

He had an adoring fanbase that made his 2005, 2007, and 2008 albums all land at #1 on the Billboard chart. By 2006, West was among the top 10 music artists in the world, based on certified record sales, joining the ranks of Coldplay, Celine Dion, Britney Spears, Madonna, Rihanna, Garth Brooks, Mariah Carey, Jay-Z, Lil Wayne, and Eminem.

While West’s reputation for ego and arrogance defined his perception at-large, the power, vulnerability, and thoughtfulness of his art made him one of the most relatable musicians of the era. Yes: He could be loud, he could be brash. But at least he was passionate. As much as he cared about himself, he seemed to care about others. Why else would he call out George Bush on national television rather than sticking to the script regarding Katrina relief? Why else would he condemn the homophobia in hip-hop and call for his peers to be better and do better?

In summer 2009, West and Lady Gaga announced a joint tour called “Fame Kills,” set to kick off in November. Kanye was, at that time, already established, while Gaga was the newly minted star, as her debut album, The Fame, had arrived with the force of a hammer blow. “Just Dance” and “Poker Face” had been the No. 1 songs in the country.

Given what we know of how creative both artists are, their penchant for epic staging and storytelling, one can only imagine the legendary potential of Fame Kills. Unfortunately, two months before the tour began, in September 2009, Kanye West went to the VMAs. And nothing would be the same.

While Kanye’s career had continued to flourish, his personal life was a far more winding road. Following much of the joyous fun of The College Dropout, his next albums — Late Registration, Graduation, and 808s & Heartbreak — had an increased focus on the cost of fame.

Late Registration was full of nostalgia for the life West had left behind since he became a superstar. Graduation, as we detailed in Part 1, saw Kanye explore the experience of leaving Chicago behind and accepting that his home and relationships could never be the same. Then 808s was, when you boil it down, a cry for help.

As separated from his old life as he was, Kanye had had one constant and one semi-constant: his mother (Donda West) and his fianceé (Alexis Phifer).

Donda had long-been Kanye’s #1 fan. A doctor of English education, Donda spent a majority of her career — 24 years — teaching at Chicago State University. She would retire from CSU in 2004 to manage her son. She traveled with him, was CEO of his brand label, head of his charity foundation, and she gave constant advice and guidance as only a mother can. But in fall 2007, she passed away after complications from a surgery. Her death, at only 58, was unexpected.

The history between West and Phifer, an enterprising fashion designer, isn’t well documented. An August 2007 cover story by Harper’s Bazaar gave a snapshot of their relationship, including that the two had ignited their romance in 2002. But Phifer was never mentioned on Dropout, Late Registration, or Graduation by name (unlike Sumeke Rainey, his pre-fame girlfriend, who was on “Never Let Me Down”). According to the popular Google results for West’s dating history, he and Phifer would split sometime in 2005 and reunite in 2006. Shortly after, he’d propose.

With no date announced, the engagement endured, collecting month after month, from 2006 through 2007 and into 2008. In that time, Donda would pass away. And Kanye, working through his grief, would spend much of his energy crafting his immense Glow in the Dark tour. To give you an idea, this is how the Los Angeles Times opened its review of the show: “Kanye West has always fancied himself a hero; now he has staged his ‘Götterdämmerung.’ The hip-hop star may or may not have been thinking about Richard Wagner’s epic Ring cycle when he decided to turn his Glow in the Dark tour into an apocalyptic space opera. The show … had more obvious reference points: Japanese anime, Will Smith in ‘I Am Legend’ and any Imax shows about the planets that West might have seen as a kid.”

After a year and a half, not long after the Harper’s Bazaar piece, in the early part of 2008, West and Phifer called off their marriage plans and parted ways.

Not long after, Kanye summarized his loneliness and confusion on the seminal 808s & Heartbreak. It was a dramatic departure from his previous albums. More singing than rapping. The fun gone, replaced by the mercurial musing of a shattered spirit. The album’s final track, “Pinocchio Story,” saw West decry the cost of fame. “There is no Gucci I can buy,” he raps/sings/cries, “There is no Louis Vuitton to put on/There is no YSL that they could sell/To get my heart out of this hell, and my mind out of this jail.”

He tells himself, “You’ll never figure out real love.” And even blames himself for his mom’s death, wondering whether, if he had never moved to L.A., she’d still be alive.

Overall, 808s revealed Kanye felt he had lost something immense in his life: love. And he wasn’t sure he’d ever have it again.

Eleven years later, time has spoken, and 808s & Heartbreak is thought of as a pivot point in hip-hop and pop music: as the album that paved the way for the vulnerability and hybridity of Drake, Kid Cudi, Travis Scott, The Weeknd, Post Malone, and many others to have mainstream success.

But at the time, 808s was West’s first major mixed response of his career. Add that to the loss of his mother, the end of his engagement, and it was a recipe for … something.

By the end of 2008, West was involved with a new romantic interest. An unknown model in a Ludacris video had caught his eye. All it took was one call to Ludacris. Just like that, Kanye had the number for Amber Rose.

Rose had been a struggling actress out of Philadelphia. A part-time stripper. She was on her grind, with the looks and confidence to make a splash in the entertainment industry. A couple of small roles in TV and a short film, a few music video shoots, and suddenly Rose was on the arm of one of the biggest artists in the world, holding her own in the limelight.

It would seem West had found someone who could keep up with his lifestyle. But there was a sense of the provocative about their relationship, with Rose often serving as Kanye’s nude or near-nude or furred muse. West, without the steadying presence of his mother, had an increased edge and indulgence.

That edge came was never sharper than the 2009 MTV Video Music Awards. West walked the red carpet with a bottle of Hennessy brandy in hand, Rose by his side. During the ceremony itself, Kanye, halfway through that bottle of Henny, would take the stage in the midst of Taylor Swift’s acceptance speech for Best Female Video, interrupting the young  Nashville phenom with the now-infamous “Yo, Taylor, I’m really happy for you, I’mma let you finish,” to tout the “Single Ladies” music video by Beyoncé as “One of the best videos of all time!” The backlash was immense and immediate. From President Barack Obama calling West a “jackass” to an army of critical articles on every news and pop-culture website to the tsunami of vitriol on social media.

One week after Fame Kills tickets went on sale, Lady Gaga would announce the cancellation of the tour. “He’s going to take a break,” Gaga said, “but I’m not.” The concert name, in hindsight, sounds like some kind of great, cosmic foreshadowing of what was to befall Kanye.

Ironically enough, Billboard would name West and Swift as the male and female artists of the year for 2009. But, by the time Billboard made that announcement in December, Kanye had already gone into exile.

For much of the next year, he was outside the continental United States. From Japan to Italy to craft clothes, or in Hawaii to build his next album. Once again grieving, once again amalgamating grief and music into a new album like some kind of mad scientist — West’s joy-ride with Rose would slow to an eventual halt. The two broke up in summer 2010.

What was next for West?

This article was written by Chris Lambert from Forbes and was legally licensed through the NewsCred publisher network. Please direct all licensing questions to legal@newscred.com.