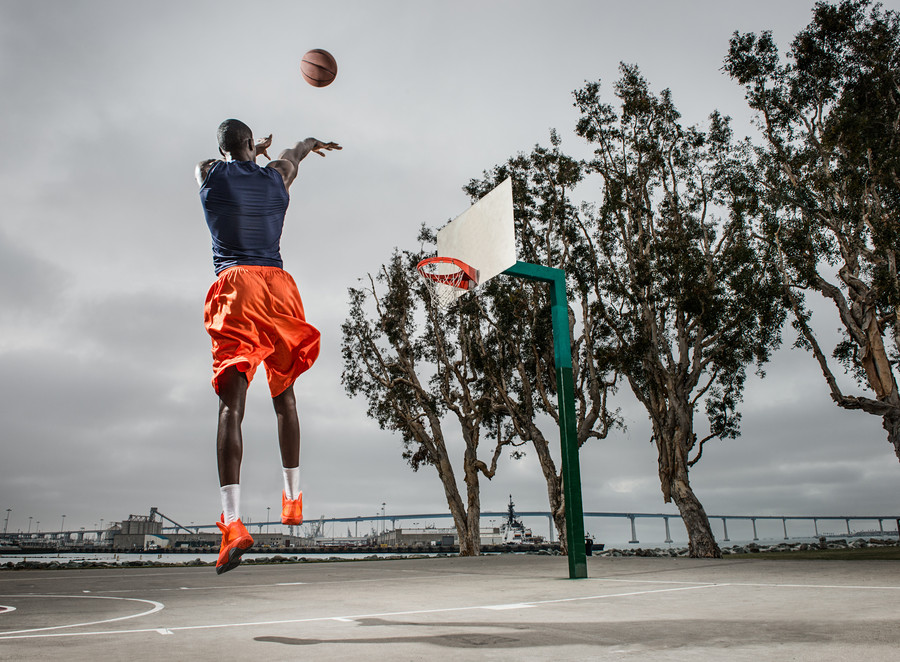 Kobe Bryant Inspired Players Around the World, One Sleepless Night at a Time

Before he reached NBA stardom, Joel Embiid lay awake in Cameroon, a teenager waiting for his household to fall asleep.

He wanted to watch basketball, the game he'd only recently discovered. Highlights on YouTube weren't a reliable option; his parents limited the time he spent on electronics, pushing him to study and help around the home. The time difference also meant that even the NBA's earliest tipoffs in the U.S. began after midnight in Yaoundé, Cameroon's capital. That didn't work with his strict 9 p.m. bedtime.

It was why Embiid occasionally, quietly, shuffled out of his sheets late at night.

"I would still sneak out and go to the living room and turn on the TV, and the volume all the way down, just to get to watch it," the Philadelphia 76ers center said last week.

For their son's night-owl basketball fix, Embiid's parents had one person to blame: Kobe Bryant.

The first basketball game Embiid watched was during the 2010 Finals between the Lakers and Boston Celtics, an experience that introduced him to Bryant, the guard whose indefatigable style captivated the NBA newbie.

"That was also when I fell in love with basketball," Embiid said. "That's why he became my favorite player. I mean, I would say that I'm probably here because of him."

More than one year after he and eight others were killed in a helicopter crash near Calabasas, Bryant will be posthumously inducted in the Naismith Memorial Basketball Hall of Fame as part of a star-studded class that includes a pair of his former rivals, Tim Duncan and Kevin Garnett. Among those watching the enshrinement will be a generation of international players, Embiid included, who trace their love for basketball and paths to the NBA back to the lessons learned from studying Bryant, often one sleepless night at a time.

"I used to watch a lot of highlights of Kobe — grew up with Kobe, " said Giannis Antetokounmpo, Milwaukee's two-time NBA most valuable player who grew up in Greece.

The feeling is shared by Atlanta's Danilo Gallinari, who pored over homemade videotapes of the Lakers' championship three-peat in the early 2000s as a kid in Italy, and his Hawks teammate, Bogdan Bogdanovic, who so reveres the Lakers icon that his phone's cover and screen both feature a picture of Bryant, according to Gallinari.

Bogdanovic was 13 when he woke before sunrise in his native Serbia to watch what became one of Bryant's singular performances in January 2006.

"In Serbia, in order to watch Kobe, you had to wake up early in the morning, 3, 4 in the morning," Bogdanovic said last year. "Eighty-one points. I saw it live."

As a high school star outside of Philadelphia who bypassed college for the NBA, and then a young, brash guard who led the Lakers to five championships in 20 seasons, Bryant first grew rabid followings domestically behind daily highlight shows and later, the rise of social media and streaming. In Southern California, future NBA stars including Kawhi Leonard, James Harden, DeMar DeRozan, Paul George and Russell Westbrook grew up able to watch his exploits after dinner and fall asleep dreaming of one day joining him in the league.

But even globally, in areas, where Bryant's highlights and Lakers games were not as easily accessible, his visibility extended far beyond the NBA's borders. In 2015, Bryant celebrated his 10th offseason tour of Asia with Nike, the kind of global marketing push that drew thousands to his stops. One year later, more than 110 million people in China alone watched his final game on Tencent, one of the league's broadcast partners.

That fame has endured after his death at 41. The face of Bryant and his daughter, Gianna, who also died in the crash, were painted onto a court in the Philippines. Their names also grace a plaza in Reggio Emilia, the Italian city where Bryant's father, Joe, once played professionally.

After Bryant turned professional in 1996, Gallinari was part of his first wave of international followers, in part because his father had played professionally against Bryant's father in Italy during the 1980s.

"With the connection that [Kobe] has with Italy we all liked to think he is that good because he grew up in Italy," Gallinari said.

Still, eight hours ahead of Los Angeles in a country whose dominant passion is for soccer, the NBA was not easily accessible in Gallinari's small hometown south of Milan, in the years before YouTube. Games were broadcast on one channel, TELE+, Gallinari said.

"I grew up watching Michael Jordan so I'm more of that generation,' Gallinari said. "But I was one of those guys that was up in the morning — my parents were not happy about that — but I was the one up early in the morning, late at night, watching Kobe."

Unlike Gallinari, not everyone had grown up on Jordan, and for them, Bryant became the gateway to the NBA.

Clippers center Ivica Zubac, who grew up in Bosnia and Herzegovina, just east of the Croatian border, was 8 when he heard older men playing pickup basketball in his home town exclaim "Kobe!" after every shot. Unfamiliar with the name, Zubac turned to Google.

"No one played like him," Zubac said. "Watching him play every possession, play as hard as he can, offense and defense, it was beautiful. It was like, man, this is my idol, I want to copy his moves, I want to be like him. I want to watch him play every single possession. That's how it felt for me.

"National TV in Croatia, they would only show the games on like Christmas Day or something like that, the NBA Finals. Christmas Day was for me, NBA basketball. I would stay up the whole day, whole night, I would watch the games. And I was ready for that 4:30 a.m. [Lakers tipoff] back home. It was tough, but it was worth it."

Antetokounmpo watched the NBA for the first time when he was 13, after playing video games against his brothers in their Athens basement apartment deep into the early morning hours.

"We were just like going through the channels and all of a sudden we saw the Lakers playing against Boston," Antetokounmpo said. "Back then we were like big soccer fans, my dad played soccer, we only used to watch soccer games, Champions League — but now, let's watch this game.

For those who'd stumbled upon Bryant, the almost accidental nature of their discovery kick-started an intense search to watch every turnaround fadeaway, snarl and chest-beating celebration, as if to make up for lost time. For Zubac, one perk of turning professional as a teenager in Europe was the access it afforded to streaming platforms such as NBA League Pass. He set a schedule: two workouts and classes during the day, NBA games all night.

"It's very tough to continue normally the next day after you haven't slept all night," Zubac said. He has no regrets. Only two months after Bryant's 2016 retirement, the Lakers drafted the 7-foot center.

Embiid said when he told his parents about his interest in basketball, his father initially resisted allowing his son to play, saying the game was too physical. Embiid's life changed when he attended a local camp and was noticed by NBA player Luc Mbah a Moute. By 16, Embiid was in the U.S. Four years later, he was drafted third overall. Now he's one of the league's most dominant big men and one of this season's top candidates for most valuable player.

In a 2018 Players Tribune essay, Embiid likened his life to a movie. If so, any coming-of-age montage would require scenes of Embiid watching the NBA, and Bryant, in the dark, learning lessons he has since put to use under the same NBA spotlight he used to watch.

"When you watch the way I play basketball and the moves that I've added, especially when it comes to fadeaways over both shoulders, that comes from a lot of tapes of Kobe's game," Embiid said. "I miss him a lot. Wish he was still here with us."

This article was written by Andrew Greif from the Los Angeles Times and was legally licensed via the Tribune Content Agency through the Industry Dive publisher network. Please direct all licensing questions to legal@industrydive.com.