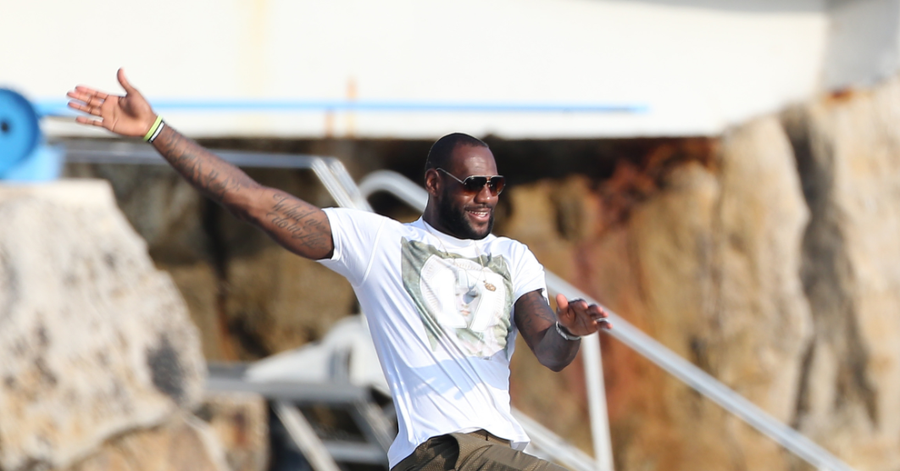 LeBron James has always been driven by the desire for attaining unparalleled achievements. In his youth, James was the youngest No. 1 overall pick, youngest All-Star Game MVP, youngest to record a playoff triple double, and the youngest player to score 30,000 points. James has also been in pursuit of Michael Jordan's undisputed status as the NBA's GOAT since he was 18.

While he's gaining ground in the homestretch of his career, one significant aspect of what he's called chasing Jordan's ghost is matching or surpassing Jordan's irrefutable claim as the first billionaire ex-athlete. How? Jordan became a billionaire well after his playing career ended in 2015 at the age of 52. The ever-ambitious James is attempting to eclipse the billionaire barrier while he's still an active player.

Similarly to his peers, James has become a pitchman for sneakers, sports apparel, and products – but he's also broadened his horizons beyond basketball and into the realm of billionaire moguls Warren Buffett and David Geffen. His obsession with success on the court has now broadened to off the court endeavors, ultimately forcing him to leave "The Land."

By relocating from Cleveland to Los Angeles for the final act of his NBA career, James put himself in position to return to the NBA pinnacle – and, by design, James’ business interests are also greatly served. James' net worth is estimated to be somewhere in the range of $300 to $400 million after inking a four-year, $152 million contract with the Lakers. Sacrificing $50 million and an extra year in a potential Cavaliers contract is outweighed by the lucrative nature of the Los Angeles market’s built-in features. As James ages and his net worth grows, the countdown clock is ticking on his ideal wealth status – and L.A. is the best shot that James has to reach his goal.

The $387.2 million in salary he'll have earned from playing contracts by 2022 will make him the highest-paid player in NBA history, dwarfing the modest $93 million salary Jordan collected during his career. Conversely, NBA's James' Nike lifetime deal currently earns him $32 million annually. That may sound like a lot, but it's not even a third of what Jordan pockets: Jordan Brand’s namesake personally nets "His Airness" approximately $110 million a year. To join Jordan in the billionaire’s club, James has had to be savvier to generate capital off the court.

Here's why James' move to LA was a smart one: Magic Johnson. As team president, Johnson will build a team around James, and Johnson's enviable business acumen will likely rub off on him too. In 2010, for example, Magic netted $100 million when he divested his interest in Starbucks and sold his minority share in the Lakers. There are lessons to be learned from the Hall of Fame mogul, both on the court and in the boardroom, but it’s clear LeBron already has strong investment instincts of his own. Following Apple’s acquisition of Beats by Dre, James’ minority stake allowed him to walk away with $30 million. Additionally, James's initial investment of $1 million in Blaze Pizza is now valued at $35 million – and the pizza chain is the fastest growing in the United States.

There is no exclusive LeBron brand like the Jordan Brand. However, Los Angeles carries a significant amount of marketing cache. His original $90 million Nike contract included a major market clause that would pay him more if he wound up in Chicago, New York or Los Angeles. An exclusive LeBron Brand could go a long ways toward closing the earnings gap between Jordan and Brand.

Now 33, James seems to have developed a cogent post-basketball future that revolves around LRMR Ventures (previously LRMR Marketing), the marketing agency he and business partner Maverick Carter founded in 2006, which now handles his investments. In addition to venture capitalism, they've also focused on SpringHill Entertainment's operations.

In 2014, SpringHill Entertainment, the multi-platform production company, co-founded by James and Carter, developed its first series for Showtime. “Survivor’s Remorse” lasted four seasons, however, it was merely a precursor for James’ foray into the entertainment world. He also dipped his toe into acting in the 2015 comedy Trainwreck.

While myopic observing basketball fans have been anticipating a Space Jam sequel starring James, he’s gone macro and begun developing projects for film and television as head of SpringHill.

Rather than limit himself to following athletes such as Jim Brown to the big screen, James could be the next David Geffen or Thomas Tull. Tull, the founder of Legendary Pictures Entertainment, is a blueprint of the best case scenario for James in Los Angeles. Before founding a production company, Tull invested in the film industry while running a private equity firm. Five years after their launch, Warner Bros. offered him a 40-film agreement and Tull's net worth increased to one billion dollars.

SpringHill also signed a content creation deal with Warner Bros. and in recent months they’re diving in by ramping a number of projects. They've produced several documentaries, have tentative plans for a House Party reboot and scripted content on SpringHill’s UnInterrupted platform, which Warner Bros. financed through a $15.8 million investment in 2015.

Variety recently reported that SpringHill Entertainment has pitched a script by acclaimed screenwriter Steve Mallory. The untitled comedy would be produced by James (he earns executive producer credits on all SpringHill projects) and serve as a vehicle for his burgeoning acting career, although it’s not clear if he’d be in a lead or supporting role.

Whereas Jordan requested a basketball court be built on the Warner Bros. lot during filming for Space Jam, James will be spending at least 41 nights a year in Staples Center arena, situated 15 minutes away. From Cleveland, he was merely an interloper in the entertainment industry. Now, James will have the access to Hollywood that he's been seeking.

In Los Angeles, he’ll hobnob regularly with A-Listers, but more importantly, the power brokers and financiers who bankroll productions and have monetized their own production companies. Making a commercial hit will be integral to SpringHill’s profitability – but if James and Carter continue to exhibit wise business sense, his production company could be the lucrative enterprise in his portfolio that propels King James into billionaire status.