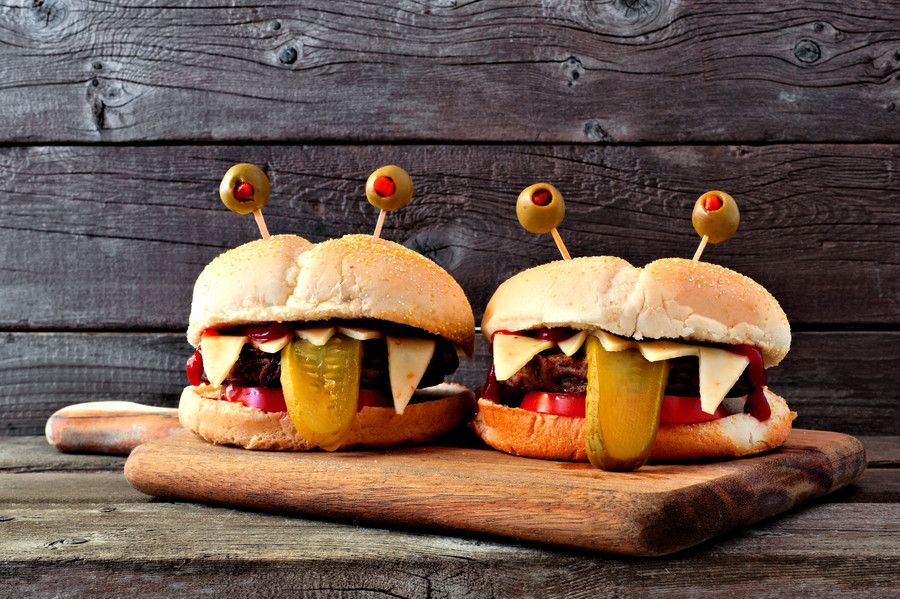 Carla Hall couldn’t help herself. Her fork pierced a cockroach, spilling goo all over her plate.

That’s the idea, actually. Gross is good on Food Network’s “Halloween Baking Championship,” where slimy and runny foods are coveted. Hall serves as host and judge on the runaway seasonal hit, which debuted Sept. 14. This was the first year where Hall, a judge in seasons past, also hosted the show.

For the uninitiated, the show features sweet confections twisted to look like spiders, zombies, and whatever ghoulish idea the bakers come up with. Whether it’s cupcakes made to look like bloodshot eyeballs — just like you make at home, right? —  or a pumpkin spice cake with a spider-web lattice, professional bakers routinely show they can go way beyond a simple cake. And when they don’t execute their lofty plans correctly, as when a contestant created a snake that looked a lot like a green slug on a plate, it’s all the more entertaining.

It’s easy to see why viewers have an appetite for the show, which ranks among the top original programming on cable TV. Sure, the treats are often gross. That’s the idea. But the designs often let loose the bakers’ creativity. Why not fill the mouth of a howling werewolf with strawberry-flavored syrup? Then there’s the zombies.

That the show is happening at all amid the coronavirus pandemic is an impressive feat. The cast and crew were sequestered in a California resort for the duration of filming.

“When we got here, we were all required to do a COVID test just to make sure that we can go on set,” Hall told the Hollywood Reporter in a recent interview. “They have built a tent so that the air can flow through. There are so many precautions. People are staying here on-site, and we're all sequestered in this beautiful place. It is not bad. They had to make a few adjustments, but I think it's going to work.”

Viewers will be thankful for that. Similar to reality shows about crab fishermen or mountain climbers, viewers might wonder if they’re able to keep up with the award-winning bakers on the show. You can find out in real-time while you watch the show. Food Network includes links to recipes from the show. The recipes might be more frightening than the ghouls on the show; the mocha raspberry cheesecake takes nearly five hours to make and involves the use of a double boiler. (Semi-pro tip: Toasted pumpkin seeds are both seasonal and significantly easier to make than a mocha raspberry cheesecake.)

The undead play a strong supporting role in “Halloween Baking Championship.” Whether it’s a head with oozing flavors or a simple hand placed atop a cheesecake, zombies might be the go-to accouterment on the show.

“Halloween Baking Championship” is one of several shows Food Network rolls out for fall. All of the shows focus on the creative presentation of Halloween scenes. “Halloween Wars” features cake experts, candy makers, and pumpkin carvers creating the best scenery. “Outrageous Pumpkins” is all about creating sculptures that are far more than just gap-toothed orange faces. There’s “Freakshow Cakes,” if you need even more baking competitions. And, of course, “Worst Cooks in America” has a Halloween version. In all, the network will show 35 hours of new programming.

But the runaway star is clearly “Halloween Baking Championship,” which places in the top 20 in ratings every year. It’s Food Network’s highest-rated fall show and it’s easy to see why.

There’s the usual lighthearted smack talk among competitors, and there’s the usual time-is-running-out drama as bakers scramble to finish a piece. But the heart of the show is the food and what shapes the bakers can make out of the sweets. Devil’s food cake is natural for a Halloween show, but you might see a baker shape it into an actual devil — or in one poor baker’s plight, some kind of green banana slug. There are pumpkin spice cakes with buttercream and basil-peach-pecan crumbles. But it’s hard to beat chocolate cockroaches that you squish with a fork, causing them to ooze gooey sugar.

The show might spark viewers’ creativity as well. Looking for a costume idea? Maybe you could be a crazy chef who, in a twist, goes door to door and hands out cupcakes that look like detached eyeballs. The judges get into the act as well, going through elaborate makeup and costume work to appear as a flower child or an elf. Each night of the show has a theme; on “Addams Family” night, Hall appeared as the character Morticia.

Or maybe you simply want to dress up as Hall, who has competed on “Top Chef” in addition to working on her daytime talk show, “The Chew.” Hall, incidentally, said she doesn’t give out candy for Halloween, instead she dresses up pencils to look like broomsticks and gives them out to the few kids that stop by her place.

You’re not going to win “Halloween Baking Championship” with a No. 2 pencil in a skirt. With $25,000 and a feature in Food Network Magazine on the line, competitors will push the limits of tasteful TV.

And be warned, as they noted on a show last year, “these judges bite.”