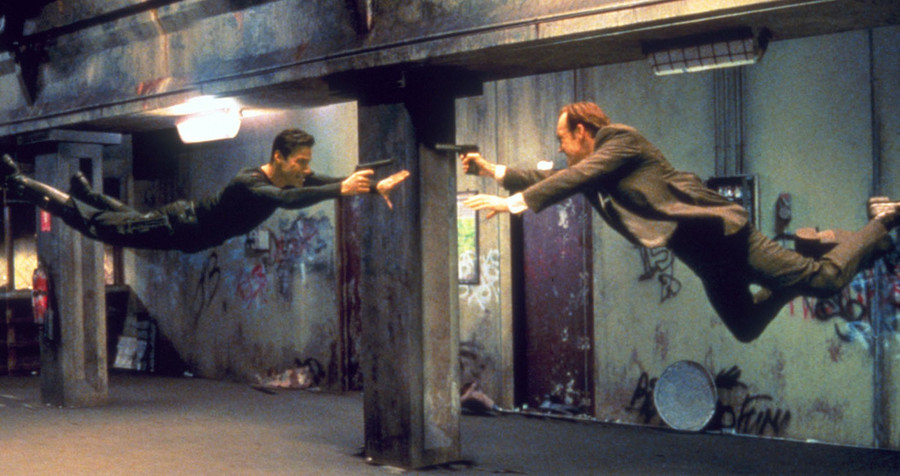 Few movies have inserted themselves into the cinema lexicon like The Matrix Trilogy. The explosive franchise from the Wachowski sisters takes us to a post-apocalyptic world where machines have commandeered the fate of Earth, and sustain themselves through energy harvested from catatonic humans plugged into a simulation—all shot with the best special effects and stunt work in film history. "The Matrix" made Keanu Reeves a household name, made Laurence Fishburne an unlikely alt cult icon, and were part of Jada Pinkett Smith's record-shattering seven consecutive $100 million+ gross film run.

To celebrate the trilogy's 21st anniversary (Congratulations! You're legal! But don't consume alcohol with red pills.) we're looking back at what made these movies great in the first place.

Cinephiles credit "The Matrix" with sparking the dawn of VFX, or visual effects. "The Matrix" VFX supervisors pioneered several cinematic techniques in the film, including "Bullet Time," whereby a shot progresses in slow motion while the camera simultaneously cuts through the scene at normal speed. Bullet Time gave us the iconic scene where Neo dodges bullets, the jaw-dropping opening scene where Trinity float-kicks an unlucky cop, and several other scenes throughout the movie.

The set design and wardrobe were equally crucial contributions to the visual feel of the movie, as was the set design and wardrobe. The Matrix Trilogy churns through a gritty urban landscape, desolate mechanical wastelands, and sleek post-modern digs, all while featuring some of the toughest costuming ever seen on screen that can probably best be described as "Ninja Tech Chic".

Saying that The Matrix Trilogy revolutionized stunt work is an understatement. The Wachowski sisters were huge fans of Hong Kong martial arts films and brought on the legendary fight choreographer Yuen Woo-ping to transform the actors to actual fighters who are captured on-screen performing their stunt work. The result is a seamless blend between suspense-driven dramatic appeal and explosive badassery/combat.

Crafting a genre-bending action movie is no easy feat, and the "Matrix" team engaged a sophisticated process to craft and refine every fight, stunt, and action sequence in each movie. Using a combination of storyboarding, stunt visualization, and bootstrapped video footage from the dojo, the stunt coordination team created such a stylized feel that the films even sparked a dance movement. One of the standout scenes from the original "Matrix" is the helicopter scene where Neo rescues Morpheus and earns his title as The One—a scene like that requires actors, stunt doubles, helicopter pilots, a crane and more. Is it all worth it? The hundreds of millions of dollars in box office sales, countless awards, and massive cult following seem to point to 'yes.'

The best part of The Matrix Trilogy is the immaculate storyline. Diabolical villains, dynamic heroes, wise sages, cunning double agents, and high stakes romance—the films have it all. The writers took audiences through the perfect story arc of the messianic hero's journey.

Neo's tale is the archetype for all of our legendary heroes, from the moment he is met with a crisis to answering his calling and receiving an elixir in the form of the red pill. What makes his story unique, however, is the context surrounding it: Neo's enemies aren't machines. They're not humans or animals. They're not even physical. Neo's archvillain is the notion that the ends of order are worth whatever means required to achieve it, including rampant human suffering, a forced comatose society, and an existence built on deception.

Machines are incentivized to uphold this vision, but even humans, wary of the trials of humanity and dejected from constant suffering at the hands of the machines, sign on to the narrative and add a layer of Judas-esque betrayal to our Messiah's story. Neo's and Trinity's love affair, exemplified by Neo being brought back to life by Trinity's passionate kiss in the throes of a climactic deadly attack by robot Sentinels, is enough to make even the stiffest heart flutter.

But "The Matrix" is for action buffs before all else, and it delivers on all fronts. From the onset of the first movie, we see Neo in an intense chase sequence as Morpheus guides him through his workplace office building as agents hunt him down, and it only picks up from there. The gunfights are second-to-none, and the martial arts choreography alone is worth tuning in for. But all of these sequences serve the purpose of telling the greater story: how hard our heroes are fighting to save humanity, and how ruthlessly they are attacked for it.

The Matrix Trilogy has an especially chilling yet relevant appeal right now as we witness the advent of AI-powered technology and robotic integration on a large scale. What sci-fi aficionados call the Singularity is happening in real-time, and even fall 2019 fashion looks like it was taken from the "Matrix" set. There's no question The Matrix Trilogy was omniscient — only time will tell how much so.