The 2020 NCAA Men’s Division I Basketball Tournament was canceled last year due to the COVID-19 pandemic. But after a trying year for sports fans around the world, the legendary basketball tournament returns this year with a majority of the games being played in Indianapolis, IN.

Two years ago, the Virginia Cavaliers defeated the Texas Tech Red Raiders 85-77 in an overtime thriller for the school's first-ever national championship. But will this year mark the return of recent champions, or will it be the story of an unlikely and counted-out underdog? Either way, we cannot wait for this tournament to get underway.

Here's everything we know so far.

While we wait for what some argue is the "best part" of the tournament, here's 2019's "One Shining Moment" for your viewing pleasure.

The art of picking a March Madness sleeper

What does it take to make a deep run in March Madness?

The 2021 NCAA tournament has arrived! The best three weeks of the year will officially kick off with Selection Sunday on March 14 at 6 PM ET and culminate with the National Championship on April 5 — both courtesy of CBS.

Catch all the action between now and then on CBS, TBS, TNT, truTV, and the all-encompassing NCAA March Madness Live app on IOS and ANDROID.

CLICK HERE OR ON THE BRACKET BELOW TO PRINT THE FULL-PAGE VERSION OF THE OFFICIAL 2021 NCAA TOURNAMENT BRACKET. 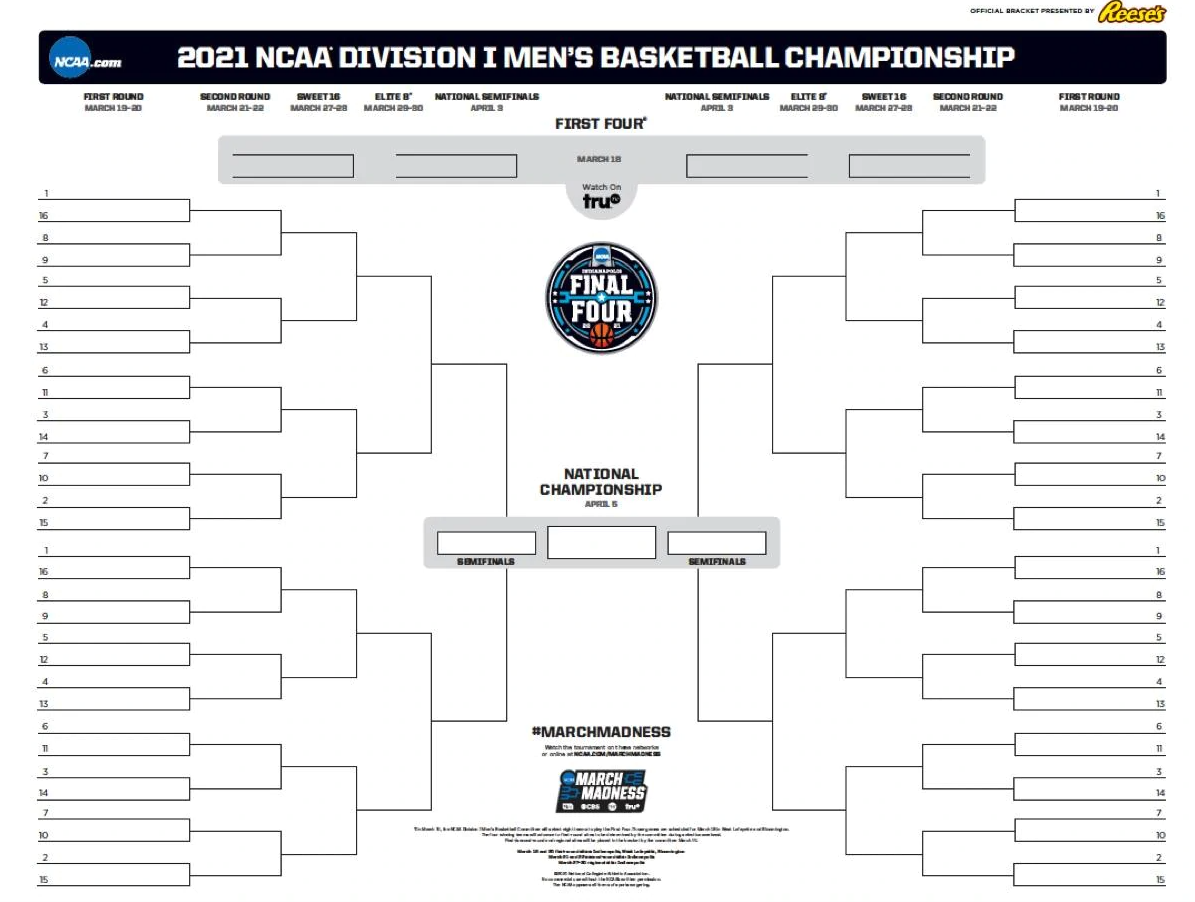 Here are the 32 teams that earned themselves an automatic NCAA Tournament bid. Coming soon!

March Madness starts with the First Four games on March 18 at 4pm ET via truTV and TBS and ends with the National Championship on April 5 via CBS. You can find the full schedule HERE. FULL SCHEDULE COMING SOON!

WHEN IS 2021 SELECTION SUNDAY?

On Sunday, March 14, the full March Madness bracket is released to the public on the CBS SELECTION SHOW AT 6 PM ET.

WHEN IS THE 2021 MARCH MADNESS BRACKET RELEASED?

And for those of you competing for bragging rights or for that coveted office raffle, here's what the past five winning brackets have had in common:

HOW DO I WATCH 2021 MARCH MADNESS GAMES?

All 2021 March Madness games will air on either CBS, TBS, TNT, and truTV. You can also stream games via the NCAA March Madness Live app on IOS and ANDROID. FULL SCHEDULE COMING SOON.

WHEN IS EACH ROUND FOR THE 2021 NCAA MEN’S DIVISION I BASKETBALL TOURNAMENT?

The 2021 Final Four is at Lucas Oil Stadium in Indianapolis, IN.

WHAT ARE THE COVID-19 PROTOCOLS?

The entire 2021 men’s basketball championship will be played in Indiana, with the majority of the tournament’s 67 games taking place in Indianapolis. Games will be played on two courts inside Lucas Oil Stadium, as well as Bankers Life Fieldhouse, Hinkle Fieldhouse, Indiana Farmers Coliseum, Mackey Arena in West Lafayette, and Simon Skjodt Assembly Hall in Bloomington.

Only one game at a time will be played at Lucas Oil Stadium. Teams will practice at the Indiana Convention Center with multiple courts set up inside the venue. All teams will be housed on dedicated hotel floors, with physically-distanced meeting and dining rooms, as well as secure transportation to and from competition venues.

WILL THERE BE FANS IN ATTENDANCE?

As of February 17, the NCAA has not yet released its official plans.

WHAT IS SELECTION SUNDAY?

Selection Sunday consists of the NCAA Division I Men’s Basketball selection committee determining the 68-team NCAA Tournament field, choosing 36 teams in addition to the 32 conference tournament winners, and ranking all 68 teams in four separate regions from 1-16.

HOW MANY TEAMS GET INTO THE NCAA MEN’S DIVISION I BASKETBALL TOURNAMENT?

HOW WILL SEEDING WORK FOR THIS YEAR'S TOURNAMENT?

The NCAA bracket will be handled a little bit differently this year because the entire tournament is in Indiana. The top four seeds will be handled the same and so will the First Four. The changes will come in how the rest of the bracket is completed. Teams will be placed in the bracket based on rankings without the usual considerations for geography. There will be 37 at-large selections (one more than normal) and 31 automatic qualifiers (one fewer than normal). You can read more about the bracketing changes here, and below is a look at the Top 16 seeds as of

WHAT IS THE LOWEST SEED TO WIN MARCH MADNESS?

The lowest-seeded team to win it all was the 1985 Villanova University team as a No. 8 seed.

WHAT IS THE LOWEST SEED TO WIN A MARCH MADNESS GAME?

In 2018, No. 16 seed UMBC became the lowest-seeded team to win an NCAA Tournament game when they upset No. 1 seed Virginia.

WHAT NCAA MEN’S DIVISION I SCHOOL HAS WON THE MOST NATIONAL CHAMPIONSHIPS?

UCLA has won the most national championships, with 11 titles. Next on the list is Kentucky with 8, North Carolina with 6, and both Duke and Indiana with 5.