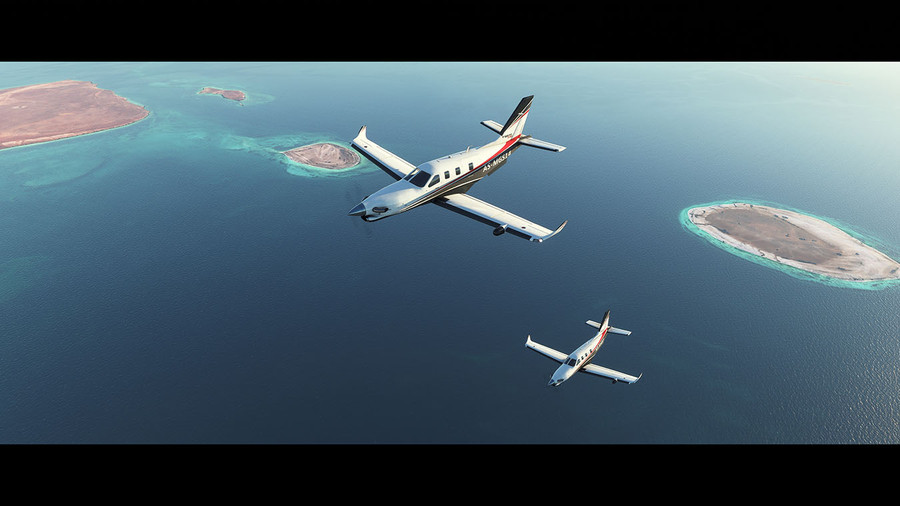 Many aircraft are still grounded due to the coronavirus pandemic, but would-be and real pilots took to the virtual skies on Aug. 18 with the first update in years of Microsoft's venerable Flight Simulator game.

The bestselling title dates all the way back to 1982 — when home computers had less processing power than a graphics card today — and Microsoft tasked French developers Asobo Studio with giving it the biggest overhaul since 2006.

Two of Asobo's co-founders even took flying lessons over the past four years to inject real-world experience into their design efforts, and the firm enjoyed access to Microsoft's Bing satellite mapping and cloud-powered processing.

"The lessons were essential (to introduce) something sensory to the game," one of them, Martial Bossard, told AFP.

"What sensations does a pilot feel? How does the plane react under a cloud and above the sea? In past simulations, it was a bit rigid," said Bossard, who is lead software engineer for the game.

The new title went on sale initially for PCs and online streaming, with an Xbox version due later. Microsoft also plans to adapt it for a more immersive experience on HP's upcoming virtual reality headset, the Reverb G2.

Illustrating its technical complexity, the desktop version comes on no fewer than 10 DVDs and requires at least 90 GB of hard-disk space — prompting some complaints of installation problems from early buyers.

But in general, critics gave sky-high praise for Asobo's hyper-realistic graphics and attention to cockpit detail, with review aggregator Metacritic scoring the game 93 out of 100.

"Microsoft Flight Simulator is the most incredible experience I've ever had on a computer," commented IGN reviewer Seth Macy, who served in the U.S. Air Force.

"The realism, the depth, the almost limitless replayability — it's like nothing I've ever played before."

The game is something of a take-off for Asobo, which was founded by 12 gaming friends in an apartment in Bordeaux, France.

The French studio has become known for video game adaptations of several Pixar films, including "Ratatouille," "WALL-E," "Up" and "Toy Story 3."

An important milestone was Asobo's release in May 2019 of "A Plague Tale: Innocence," which won multiple industry awards and resonates in a world beset by a virulent disease.

The difference between 2002, when the studio was created, and now "is like learning to fly on a small plane and at the end being the pilot of an Airbus," Bossard said.

Microsoft's game has indeed offered generations of professional pilots, as well as enthusiastic amateurs, the opportunity to train in painstaking detail on a fleet of aircraft.

The 2020 version gives them control of everything from a Pitts Special S2S biplane to an Airbus A320 Neo or widebody Boeing Dreamliner, and the option to fly from an array of airports around the world past detailed cityscapes and cloud formations.

Software advances since 2006, and the onset of artificial intelligence, gave the designers the ability to map out the world with startling clarity, from the azure seas of the Caribbean to the graceful peak of Mount Kilimanjaro.

The realism is heightened by real-time weather data derived from Microsoft's Bing servers, which gives virtual pilots the actual conditions in their area of flight, rather than generic clouds.

The anticipation would have been great among gamers at any time, but all the more so now after coronavirus lockdowns devastated airline travel this year.

"Flight Simulator is a title that's been played by tens of millions of gamers, there is a community which has been waiting for several years. Microsoft doesn't have room for error," French games expert Laurent Michaud said.

The stakes are even higher for Asobo. A successful launch will offer a springboard towards "bigger games, budgets and teams," he said.

"When there are such high expectations, you can't disappoint. Asobo's reputation is at stake."

This article was written by Erwan LUCAS in Paris and Benoît Petit from Agence France-Presse and was legally licensed through the Industry Dive publisher network. Please direct all licensing questions to legal@industrydive.com.