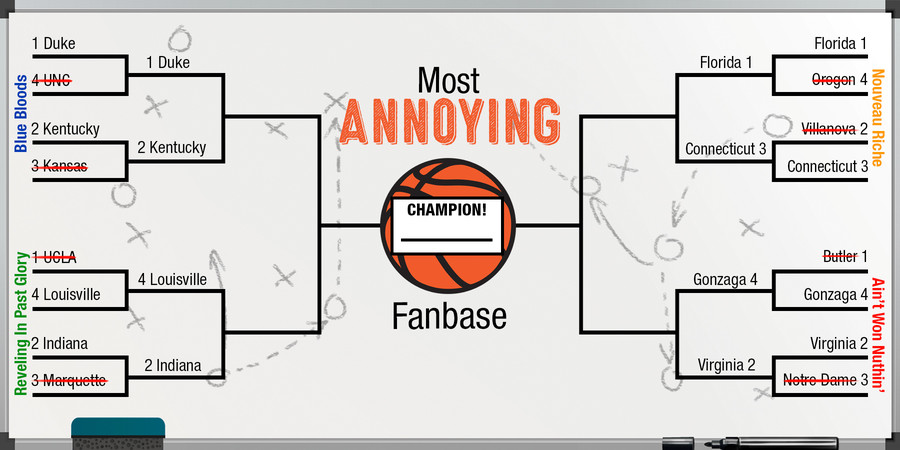 After a heated set of opening-round matchups (thank you to everyone who voted!), the Most Annoying College Basketball Fanbase Bracket moves on to round two: The Egotistical Eight. We'll all cherish the thrills, the chills, the unnerving fans who stake entirely too much on the fatherly energy of a head basketball coach. But as March Madness moves on, so must our tournament. There can be only one winner.

Our second round has some truly scintillating matchups, dramatic clashes between fanbases who have devoted their all to bugging their opponents, their families, and you, the normal sports fan. Dig in to the matchups below and scroll to the bottom to vote for the "winners."

Ah, echoes of the 1992 Elite Eight matchup are partly responsible for Duke fans being so annoying. The Blue Devils emerge from a first round matchup with hated rival UNC, the marquee battle of the tournament's first round. The Cameron Crazies stomped the—what are UNC fans even called, anyway?—78% to 22%.

To even a totally impartial journalist, it's hard to believe that any other team is going to stand a chance against the Cameron Crazies. We’re talking about the fan base that popularized the AIR BALL taunt, here, people. The whole cheering section is devoted to the craft of public mockery, producing "dirt sheets" before games to really square in on their opponents’ insecurities and belittling them within an inch of their life.

It filters down from the college level level from teams like Duke. pic.twitter.com/NQQb9DYu5i

On the other side of the group, Kentucky crushed Kansas, 70% to 30% and with good reason: they’re simply insufferable. It’s honestly tragic that they have to face Duke in this round, because it’s possible that we’re seeing generational talent get wiped in the early rounds (much like their team, most years). Kentucky fans fancy themselves as worldly and honorable, as if they were ancient Romans who listened to bluegrass. Goose Givens, who played for the Wildcats in the 70’s, luxuriated in claiming that Kentucky fans were better informed than any NBA fan. They'll take their overinflated sense of self-worth out on anyone, even championship-winning coaches.

Alas, poor Oregon, we hardly knew ye. There simply isn’t enough loathable tradition to glom onto for the poor Ducks, who basically only got sports teams a few years ago, if we're being honest. Florida stomped them 83% to 17% for a decisive entry into the second round. For their part, the Gators are the Nouveau Richest imaginable: a football school that lucked into one phenomenal recruiting class and back-to-back titles. The fans have feasted on that glory ever since.

Me: ok I’m done being dramatic about gator basketball
My desktop:
Me: omg nooooo 😭 pic.twitter.com/ryMNQd6yci

The Gators' second round opponent UConn tagged Villanova with 71% of the vote, somewhat of a surprise, considering how skilled Philadelphians are at getting under the skin of their opponents. But then again, Philly has a rowdy, hardscrabble energy that may be irritating, but remains respectable. Husky fans have an entitled haughtiness, the Connecticut blue blood infected by the high of a disgustingly dominant women’s program and a pretty good men’s team. They're a new age Duke, entering into every matchup with the belief that it simply BELONGS to them. Can a fanbase whose team didn't even make the NCAA Tournament this year win the title of Most Annoying Fanbase? Well, yeah, that would make perfect sense.

Reveling in Past Glory Region Championship:

UCLA, with their Daddy Wooden complex, felt like a winner here. But the Bruins have just been too dysfunctional over the past decade (plus "LA sports fan" is the consummate oxymoron) for their enemies to spill the Haterade. Lousiville dominated, winning 70% of the vote. It makes sense, really: Louisville fans have a couple titles to wave in your face, and the one doing the waving is likely to be wearing a giant rubber Rick Pitino mask. Louisville hosts the NCAA Tournament South Regional this weekend, so get ready for lots of red shirts to fill the seats with their delusion about how the world is out to get them.

On the other side of the bracket, it's an Indiana 91% to 9% absolute pummeling over Marquette. Thinking you invented basketball and getting all weird and weepy about it will do that for you. Thinking your team is still a premier program while you wear clown pants will make you a title contender. Keep your eye on the the Hoosiers, poised to be a dark horse competitor in the latter rounds, still complaining that they should've gotten into the NCAA Tournament even though their team lost in the NIT quarterfinals.

Gonzaga earned a comfortable victory over Butler, 64%-36%, which makes sense, seeing as they’ve been Butler for 20 years long than Butler. Every year, they succeed against whatever regular season competition you can imagine, then their perfectly oiled Mark Few-mobile gets crushed, and every year, their fans come back for more, comfortable in the presumption that this time, it will be different.

Anyone from the Pacific Northwest? Are Gonzaga fans as annoying as they seem?

Meanwhile, is there a fanbase that generates more ire off of fewer accomplishments than Virginia? The Cavaliers dusted Notre Dame (more of an irritating football school, really) in their first round matchup. Rooting for Virginia isn't so much being a fan of a school, a team, or a player. It's more like subscribing to a series of arcane principles meant to guarantee success, but that mostly just produce hideous outcomes and miserable failure. It's like being a fan of brutalist architecture, or pining for the return of the Soviet Union.

LOL’ing at these “Virginia” fans talking trash... bro, you guys made history last year by being the first 1 seed to choke to a 16. Take a seat.

Who will take home the championship? Vote away. We’ll reveal our Foul Four next week.