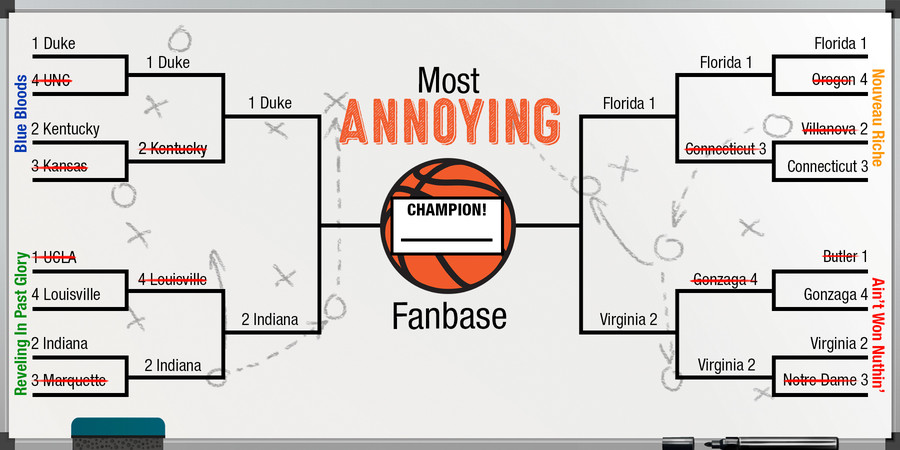 We've spent the last few days on the edge of our seats, waiting to see who will advance in the year's most hotly contested tournament. That's right, it's the Most Annoying Fanbase in College Basketball! (What did you think we were talking about?) The wait is over, and the Foul Four are primed and ready to fight it out for aggravating-fanbase superiority. But before you vote at the bottom of the page: a few words about the competitors, and a look back at some of their most annoying moments in school history. 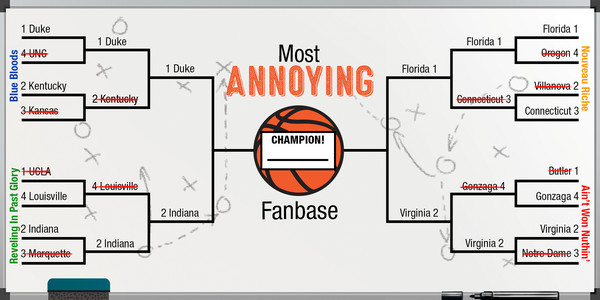 A Grand Tradition Of Jerkery: Duke

Duke might have been denied a Final Four bid this weekend, but they TOOK IT to Kentucky in the Blue Bloods Final, triumphing with a whopping 68% of the vote. One has to presume that beloved actress and activist Ashley Judd’s longtime Big Blue fandom has America feeling more charitable to Kentucky fans.

The Duke ethos is one of pure success. The titles, the prestige, the Coach K “Success in sports, business, and life” platitudes. Duke rolls around in it like a pig in slop. It’s horrible. It surely has some sick appeal if you’re living it, but looking from the outside in, it’s just a living nightmare.

Duke’s winning ethos has so poisoned the fanbase, that they’ve begun practically luxuriating in the loathing that the rest of the world feels for them. Take, for instance, an incident from the early 1990s. During a home loss to conference rival NC State, the Cameron Crazies took it on themselves to let the poor, downtrodden state schoolers know how things really stood, and began chanting: That's alright, that's okay! You will work for us one day! Denied the success they have been conditioned to believe is theirs by right on the court, Duke fans simply moved on to life itself for superiority. Their insufferability truly knows no bounds.

Indiana clobbered Louisville in the Coasting Of Your Past Glory final, gobbling up a whopping 72% of the vote. Recent Cardinals failures were just too sad for the world to deal their suffering fans another blow. It was an act of mercy, really.

Indiana fans are so weird that, one time, Coach Bobby "The Chair Destroyer" Knight was able to impress ethics on them, yelling at the crowd over the PA to tell them to stop...throwing things on the court:

When Coach Knight, of all people, is telling you to calm down and stop throwing things, you might have a problem. Passion for basketball runs deep in the beautiful state of Indiana, but as any mythologist will tell you, passion is a two way street, fueling love or misplaced rage in equal measure. Honestly, Indiana’s fans might be better off living the life they do now, rooting for a middling, past its prime program. Success would just bring the demons back.

New Jerk on the Block: Florida

Emerging from the Nouveau Riche region, The University of Florida, topping Connecticut with 60% of the vote. UConn can take solace in knowing that they will win the next fifteen straight women’s tournaments.

Florida might be new to being an aggravating basketball fanbase, but Floridian culture is practiced and expert in the ways of bringing a little too much to their sports fandom. Watch their student section participate in an entirely too lengthy coordinated dance, led by their dance team and cheerleaders:

When there’s a time out, it’s the perfect time to ?! #GoGators
ht @GatorsDazzlers @MBKRowdies pic.twitter.com/RZXV4x4K9m

Watching two-thousandish kids all lazily dab together on the prompting of some unknown, spiritual force, one is left to wonder: Don’t these kids have anything better to do? When this routine starts, none of them thought that maybe this would be a good time for a bathroom break?

Gonzaga had a good run for a small Jesuit school tucked away in Eastern Washington, but, as in the real tournament, they hit a wall, falling to Virginia, who netted a 63% of the vote.

Virginia hasn’t even been good that long, which really shows you the efficiency with which they have made themselves into an elite irritating fanbase. These fans, with their endless prattling on about the superiority of their system, their total insistence that the extremely slow, boring way they play basketball is actually good and very fun, and their propensity for endless self-justification when their team inevitably goes down in the tournament in embarrassing fashion every year, are not unlike the team itself: systematically laser-focused on doing everything they can to exploit every advantage they can find in the competition to be the all time worst college basketball fanbase.

But, it should be said: they don't have a real signature moment as a bad fanbase, the way their opponents do. Now that  they’ve finally returned to the Final Four, it's a good bet these fans will come together this week and methodically hack their way to something truly awful.

Who will face off for the Most Annoying College Basketball Fanbase Championship? Only you can decide! Vote below: