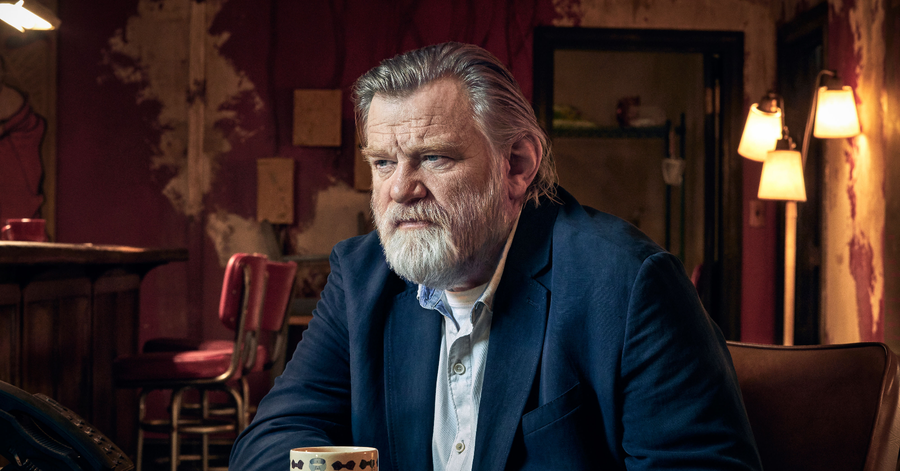 As we prepare ourselves for the second season premiere of Stephen King's Mr. Mercedes tonight, we can only imagine the depths of darkness into which we're about to descend. If Season 1 of the AT&T Original Series taught us anything, it's that everything is possible and evil has no limits. With a show so keen on exploring the intricacies of the criminal mind, there must be beacons of light to keep us afloat.

Queue our knight in (not so) shining armor, retired Detective Bill Hodges, and his straight-no-chaser neighbor Ida Silver. Brought to life by impeccable Irish actor Brendan Gleeson, and the iconic Holland Taylor, their relationship adds some much-needed levity to the cat and mouse narrative that propels the series. We spoke to Gleeson and Taylor  about their work together on the show, and what we can expect from the new season.

It’s so great to watch you two play against each other. Did you work on your chemistry off set, or was it just something that grew organically as shooting Season 1 progressed?

Holland Taylor: I had a parallel experience playing this character—as Ida was getting to know Bill, I was getting to know Brendan. The energy was relaxed and peaceful, the sort of thing where you don't have to fight or work on getting along, you're just hanging out together. As actors we were spending more and more time with each other, so we got to know each other out of character as well. It was a very special experience, which I think is unique to making a series. It's not like making a movie where things can be a bit disruptive—this was such a smooth process.

Brendan Gleeson: It took a little while to sort out, because we have slightly different rhythms, but it was just a matter of letting it happen. The writing was so good, and Holland is so instinctual so it's all there. The language had a certain bite to it, so we were allowed to just let things drift... at times when it worked properly it was the equivalent of giggling when you're in school. Trying to get away with it! If the silence was weighted in such a way, we just thought it was really funny. But there were quite a few heavy moments that we shared as well.

I'll always remember that first speech that Ida makes about her husband. It's all fun and games, and then all of the sudden she talks about her experience seeing him fall into the depths and darkness of depression... just horrible. All of a sudden we're in this place of real emotion, and that can be difficult to negotiate. To navigate that as a participant in the scene can be hard, but we were allowed to indulge in that.

I think it’s quite a mature series in that way. There's a great joy in indulging in the maturity of both of these characters. We're not pretending to be 20-somethings, 30-somethings, or even 40-somethings! We're the kind of people who've been around the block, and these new challenges are hitting us hard. We're exploring a lot of mature emotions in a way that doesn't let you off the hook, and I think for me that's the most attractive thing about doing the show. I find them more challenging than confronting the bad guy! 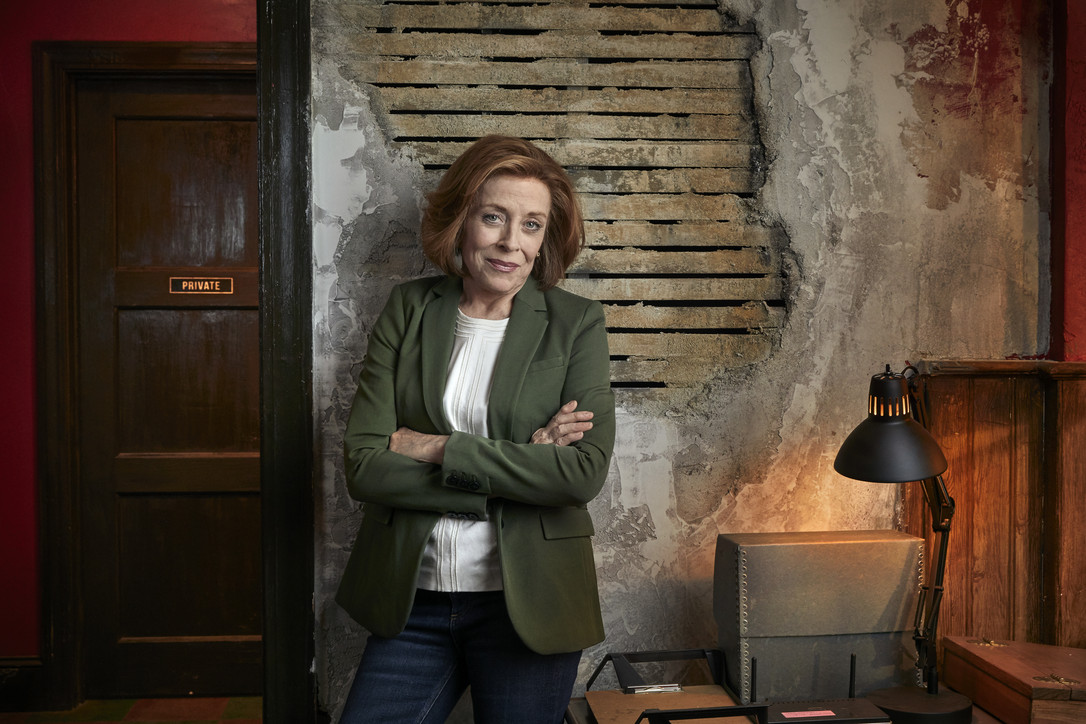 BG: I think you put your finger on it, I think it's the honesty. Hodges can't stand posing. He has a lot of little masks that he puts on all day long, but when it comes down to it he's going to tell you the absolute truth for better or worse. And Ida's absolutely a carbon copy of that! There's no gilding the lily with these two.

BG: I think he recognizes that Ida is fundamentally decent and fundamentally caring. Which, I think is very important because we know he's a tough nut. But he understands that care is a precious thing.

HT: There are moments when he resists, and he doesn't want to talk about things particularly when I challenge him. Particularly when it comes to how he's dealing with the darkness. He pushes back—he doesn't want to have conversations like this. She’ll bite her tongue, but only for a while because she will continue to try if she can to help him move in another direction. She can't help herself! She can't resist supporting him—she's already discovered ways to fight the darkness through other events in her life. It may not be his way, but she has to try to get him to do something.

BG: I think both of them can't be anything other than what they are, which is possibly why the connection is so great.

BG: I think Hodges needs human contact, and Ida helps him stay connected to the world. She's throwing him a rope, and she's trying to pull him out of the darkness for a bit. He needs to feel relevant in the world. He needs a purpose of some sort, and she knows that.

Brendan, what can you tell us about the ways in which Brady (Harry Treadaway) and Hodges' relationship is going to evolve during Season 2? [Spoilers ahead!]

BG: Well, I do get to share more screen time with him, but you know... he's comatose. Yet, he's so very present. It's a very, very strange situation to see Hodges in the room with his adversary who appears defeated. But Hodges feels that there is a presence there, so when we see him again at the top of Season 2 he's going been going to the hospital to see Brady for three quarters of a year. He wants to be there in case he wakes up. He stops going because he thinks, okay maybe he isn't going to wake up. But he can feel a presence when he sits with him. He speaks to him too, which can be very hokey, but the fact is that this presence he feels is real. And that's when we go into that Stephen King place!

Holland, this isn't your first project with David E. Kelley. What is it about his projects that draws you in?

HT: I'm always struck by the fact that for all the woman in all his shows, when they open their mouths there's a real person there. He does not write into cliché. There are millions of writers, and a large portion of them are youngish white guys. I can tell you one thing youngish white guys have no interest in at all: 70-year-old women. They have no imagination for it, and they have no interest in trying to have imagination for it. So when I open one of David's scripts and read two or three lines, I can say "that's a real person there!" That's a unique little pattern of thought and response, that’s not some stereotype—the nice neighbor, the nice wife—there are no nice wives! Wives are not nice, they're people! So David's women are all very real people, who are instantly perceivable as real people. Who wouldn't want to play them?! 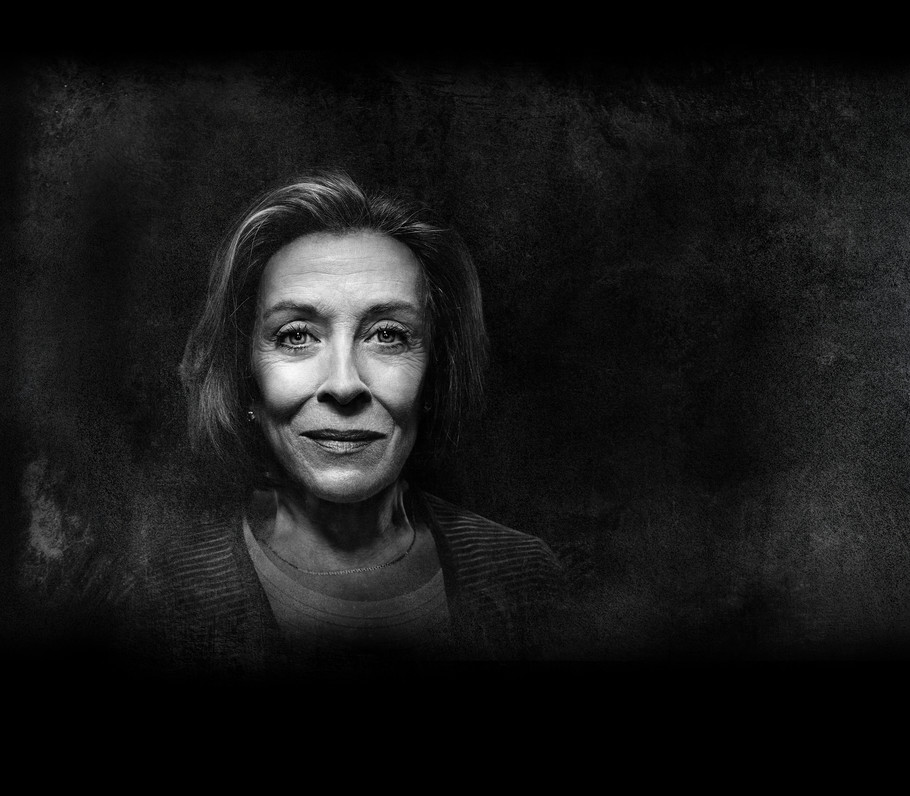