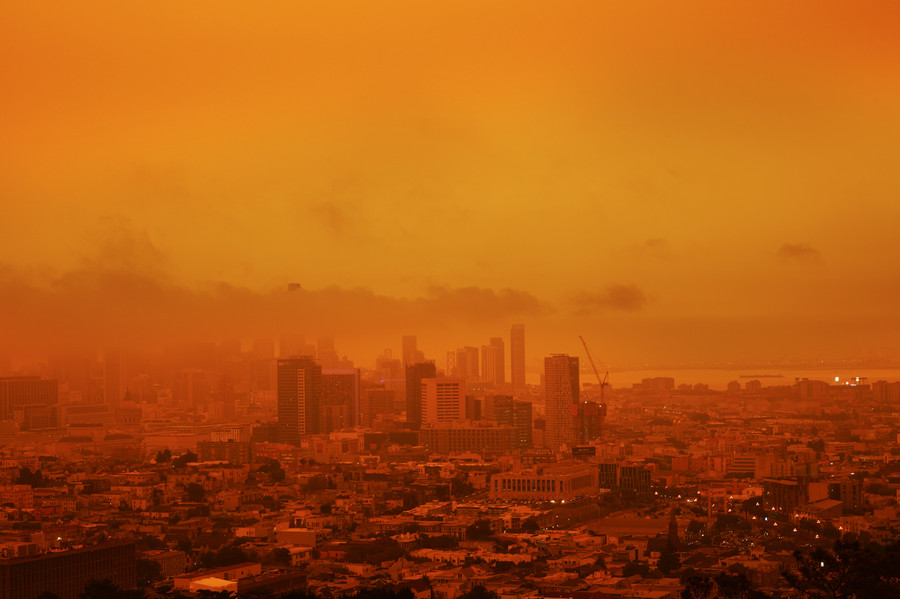 Five years ago, while world leaders were converging in Paris to hammer out a climate accord, singer-songwriter Anohni – formerly Antony Hegarty of the chamber-pop sensation, Antony and the Johnsons – hammered out her own climate work: a song called 4 Degrees for her upcoming politically-themed album, "Hopelessness."

Given the subject matter, the urgency of the climate crisis (experts say we have just ten years to drastically cut emissions and dump fossil fuels), and the title of the album, one might expect Anohni's song to be a dirge – or at least an action-inspiring anthem. Instead, the song is unexpectedly bouncy, with an epic, symphonic synth-pop background that starts strong and stays loud.

Anohni says that's deliberate. In America – where 15 percent of people don't believe global warming is happening and the ones who do know it's happening feel too depressed to hear more about it – Anohni knew she'd have to get creative. She chose what she calls a fun, "plastic" sound to lure listeners to face the album's "sharp teeth." The song gets its inspiration from AIDS activism in the 1980s, where dance music served as a surprising outlet for rage over another tragic social issue.

Anohni also departs from the traditional approach to political songs with her lyrics. She doesn't adopt the imploring sincerity of folk music or the channeled anger of rap music. Instead, she opens the song with a strange reassurance: "It's only four degrees, it's only four degrees," she sings as if trying to convince herself and her listeners that this level of warming – which experts say we are barreling toward unless we make major changes to our political and economic systems, and which could obliterate much of life on earth as we know it – is not that big of a deal.

With the opening out of the way, Anohni pushes even farther into uncharted territory. She doesn't rattle off facts and figures or moralize about what humans are doing to the planet. That's been done before – with little impact. Instead, she tries another tactic: She embraces it. "I want to see this world; I want to see it boil," she says in one verse. And in another, she ups the ante again, singing, "I wanna burn the sky, I wanna burn the breeze. I wanna see the animals die in the trees."

It's a shocking and daring approach to take to the subject and a wily one. By flipping the script and turning anger and sorrow into desires, Anohni catches her listeners completely off guard, and invites them to interrogate the consequences of their own comforts and demands. By inhabiting the mindset of the opposition, Anohni dares us to see ourselves more clearly. And that, maybe more than the usual approach, could inspire us to take a position – a world that doesn't doom itself to 4 degrees warming.

Flipping The Script: A New Take on Protest Music

Anohni isn't the only one trying to find creative ways to call attention to the climate crisis. As the climate crisis escalates – causing superstorms and forest fires to spiral out of control – other artists are finding new ways – some stark, some subtle – to bring the reality of the crisis into their music.

Some, like mournful maven Lana Del Ray, sneak climate references into what is otherwise a standard, if beautiful, love letter to a lost lover. In her song, The Greatest, Del Ray ends an intimate list of things she misses about the good old days with a grim take on the present. "L.A. is in flames, it's getting hot," she croons, and, "Life on Mars ain't just a song." Earlier, Del Ray has described losing her love as "the greatest loss of them all." But as the song pans out to include a world full of flame and failure, her words take on a subtle undertone. "If this is it, I'm signing off," she says, letting the "this" remain unresolved.

Billie Eilish, the indie-pop artist known for her veganism and environmental advocacy, is also making climate music. Notably, the recent and ever-worsening California forest fires became the backdrop of her devilish hit, All the Good Girls Go to Hell. The song was co-written by Eilish and her brother Finneas O'Connell, who confirmed fans' assumptions that that song was about climate change. Finneas acknowledges that the motivation for the song came from watching California burn, and realizing that humans are capable of destroying the planet.

The resulting song is hardly a clear allegory. It opens with the line, "My Lucifer is lonely," and spends much of its sonic real estate seeming to philosophize on the futility of being good (see: title) before landing its most potent shots. O'Connell later told the media that he and Eilish imagined the song as a conversation between the devil and God; both were bemoaning what a mess humans had made of things. And that becomes clear as Eilish moves from vague examples of humanity's missteps ("animals, evidence,"), to their consequences ("hills burn in California [...] don't say I didn't warn ya"), to a savage indictment of the species ("Man is such a fool/why are we saving him?").

Where Anohni's song deployed a lush irony to make its condemnations, Del Rey's subverts traditional themes, and Eilish's song delivers the heat with a side of cold, almost detached rage. Their approaches are unexpected and offbeat – all-new ways of shouting at a world that seems determined not to listen.