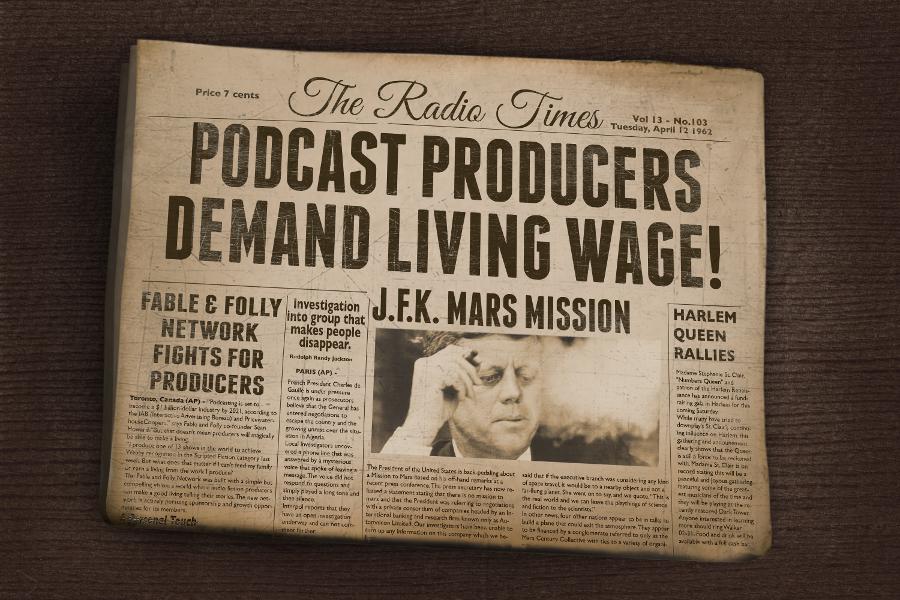 All reports are that podcasting income continues to grow during the pandemic we find ourselves in, and indications earlier in the year speculated that 2020 would finally be the year that the podcasting industry grows to a billion dollars in ad revenue.

The majority of that ad spending of course, is on podcasts that are mostly panel discussions, or investigative shows which means that most independent fiction podcasts are on the outside looking in for ways to increase their share of dollars in order to more fully fund their passion projects without the need for another job.

Unless you have a celebrity or a major network backing you, most podcasts so far have been unable to fully fund themselves. That’s why Sean Howard, of Alba Salix, decided to create that network himself with the recent announcement of the Fable and Folly Network.

Sean has a background in digital marketing, and a quick look at his Medium page will tell you that he’s been using that knowledge to chart obsessively what works and what doesn’t for his show. Up until very recently he was focusing on Patreon income with his 11-part series with charts and diagrams about his subscriber income from Alba Salix, and his other two shows The Axe and Crown, and The End of Time & Other Bothers.

In fact, he told me that the idea for his network began when he was on a panel discussion at Podfest talking about monetization through Patreon and Jared J. Smith of The Phenomenon podcast was talking about how he grew his show through ad placement. “It sent my brain churning,” he told me. So for the past two months he and his partner Eli Mcllveen were trying to find a new hosting platform for dynamic ad insertion and in the process talked to a lot of people.

He realized through these conversations that fiction shows were at a disadvantage as far as advertisers were concerned, because they told him that they considered previous episodes to be back catalog and no one wanted to pay for back catalog. “But in audio fiction,” Sean says, “there is no back catalog. Listeners start on episode 1, but advertisers aren’t used to that.”

The industry is slowly changing of course with tv executives starting to come into the podcasting space and some fiction shows like Homecoming getting major tv deals. But, it isn’t changing fast enough for Sean Howard, and he thinks part of the problem is the way that ads are packaged with fiction podcasts. “Repetitive and boring,” Sean says of the current field of ads for most shows.

So the other part of the puzzle is how to make ads interesting to the listener and profitable for the advertisers. Sean’s idea is to make the ads integrated more naturally to the content, like they are in Wooden Overcoats and Passenger List as well as to work directly with brands.

So he wrote what he calls a “manifesto document” describing how this could happen, and so with low expectations, he sent it to a bunch of his friends who make podcasts. He was expecting maybe three of them to respond, but instead he got 12 in short order and the Fable and Folly Network was born almost overnight.

Several of them gave a statement about why they joined.

Yhane Smith of Harlem Queen, a drama about gangsters in Harlem during the 1920s, says she was inspired to make her own show by the way that The Axe and Crown used the medium to tell a funny and entertaining story and hopes that the network will spur more corporate investment in audio dramas.

Øystein Ulsberg Brager, Joint Artistic Director of the dark comedy about faking death, The Amelia Project, thinks that “changing the way the marketplace thinks about advertising on audio fiction podcast series is absolutely doable, and it was obvious to us that The Amelia Project had to be part of a smart, innovative movement like this.”

Sam Boase-Miller, the Co-Creator and Composer of Marsfall, A sci-fi adventure following Mars colonists in the year 2047, says he joined because he trusted Sean and Eli’s vision completely, and that in the uncertain times because of COVID it’s a reminder that we’re stronger when we work together, helping each other earn a living with our art.”

Ann C. Sloan, creator of the Carlötta Beautox Chronicles, a podcast sitcom about an actress who accidentally became Hollywood’s next big thing, echoed that sentiment saying that “as an independent audio drama creator, it’s easy to feel isolated.” She says that joining the network gives her “a sense of camaraderie like being on a team with a unified goal to amplify our reach and monetize our shows as we do it.”

Since Sean’s big announcement, he made another Medium post focusing on his idea of integrated advertising and embedded in it was the first spec ad created for Fable and Folly by Evan Gulock and Niko Gerentes of Death by Dying. It’s a shoe ad set in the macabre humor of the shows setting reminding the listener that when they’re fleeing death, they’re going to need a good pair of shoes.

As an example of what Sean hopes to achieve, I think this knocks it out of the park with quality and brand messaging, and I can’t imagine that advertisers wouldn’t give this a chance after hearing it.

Obviously, this isn’t an entirely new concept and Sean readily admits that they aren’t the first people trying to do it, but a rising audio fiction advertising tide lifts all boats and “if we solve it,” Sean says. “It could help everyone.”

This article was written by Joshua Dudley from Forbes and was legally licensed through the NewsCred publisher network. Please direct all licensing questions to legal@newscred.com.