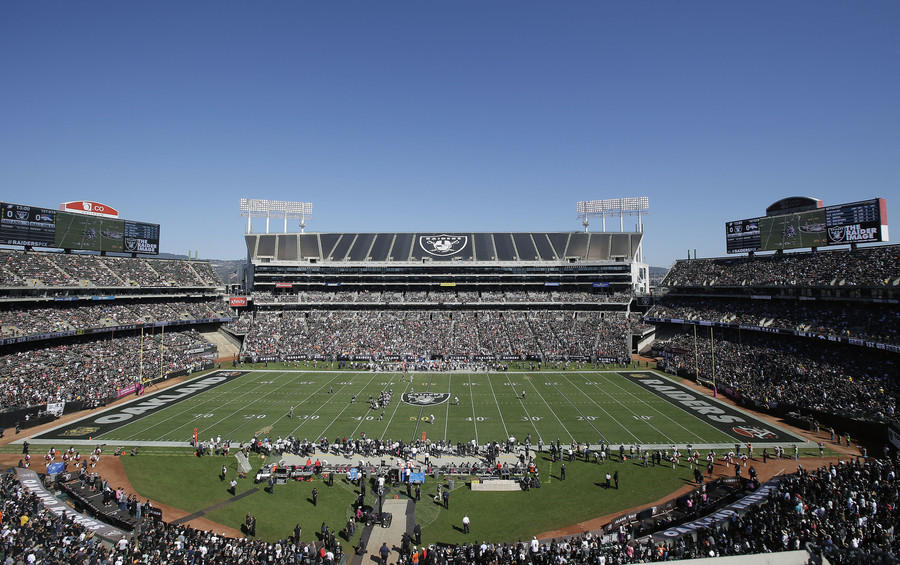 NFL Three-Minute Recap: Fallout From The Mack Trade And Sizing Up The Rookie QBs

From hot days to hot takes to Hard Knocks, each week we'll give you all the 2018 NFL Preseason news you can handle in under three minutes. (Disclaimer: You can stay longer than three minutes. Time is relative.) Here's the best of the NFL from the final week of Preseason.

Is The Mack Trade Gruden’s Parting Gift To Oakland?

So the Oakland Raiders are paying their new coach, Jon Gruden, the rather astonishing sum of $100 million, yet this week they traded their best player, linebacker Khalil Mack, because they deemed his asking price too high. Hypocrisy!

Meanwhile, they’re coming off a disappointing 6-10 season, they’ve had only one winning record since 2002, and, oh, by the way, the franchise is relocating to Vegas after this season. How would you like to be working in the Raiders’ ticket office these days? What exactly would you have for a sales pitch: “Our coach has the meanest squint in the league?”

Gruden brings a big personality to the job, no doubt, but I’m pretty sure the Raiders’ fans would rather have Mack, the best pass-rushing linebacker in the NFL, than Spider 2 Y Banana. In fact, fans may hold this against Gruden, since he’s looking like the bad guy in the deal that sent Mack to the Chicago Bears for draft picks. GM Reggie McKenzie was quoted as saying he wanted to get Mack signed, while the coach apparently thought it wiser not to pay so much to any one player.

Freely translated, it sounded like Gruden's underlying message to the fans in Oakland was something like: “It's my team now. See you in Vegas.” NFL fans can often overlook controversial decisions if wins quickly follow, but it will be tough for Raider Nation to ignore Khalil Mack dominating the NFC North while their own team prepares to abandon the Bay Area for Sin City.

Meanwhile, can a team go from rebuilding to contending with just one bold trade? The Bears obviously think so, giving up two future 1st round draft picks to get Mack and promptly signing him to a six-year, $141 million contract.

If there’s a fan base that will embrace such a move, it’s probably Chicago, where the Bears’ gritty legacy is built around a proud lineage of larger-than-life middle linebackers, from Dick Butkus to Mike Singletary to Brian Urlacher, who now has hair.

Mack is closer to a Lawrence Taylor-type of pass rusher, but like those great middle linebackers of the past, he’s a game-wrecker who can elevate a defense and, no less significantly, energize a disillusioned fan base that is ever-nostalgic for the era of Mike Ditka and Bill Swerski's Superfans of Saturday Night Live fame.

The Bears made their bold quarterback move last year, trading up to take Mitchell Trubisky with the No. 2 pick in the draft, and now they’ve gone all-in on the present with the trade for Mack. If they have the supporting pieces to make it work, GM Ryan Pace might wind up being as beloved in Chicago as Ditka.

Did The Jets Win The Draft?

Yes, the Jets may have won something, even if it's not an actual award. In this Summer of rookie Quarterbacks, Sam Darnold emerged as the only Week 1 starter from the group of five first-round draft picks. So does that make the Jets the early winners of the draft, or are they simply the most desperate team in the search for an answer at QB? It’s only been 50 years, after all, since Joe Willie Namath took them to their only Super Bowl.

In truth, it does seem Darnold won the Jets over with his poise and presence in camp and pre-season games, to the point where they decided to trade Teddy Bridgewater have veteran Josh McCown earn his $10 million salary as a mentor. It's worth nothing that Darnold will be the youngest ever week 1 starter in NFL history. The Jets don't normally break records. This is a step in the right direction.

As for the other notable rookie quarterbacks:

After four compelling episodes, HBO’s Hard Knocks finished out its summer with the Browns how it always does, focusing mostly on the human-interest angle of players on the fringe the final roster cut.

By the final episode loyal viewers had gotten to know the likes of fourth-string quarterback Brogan Roback, backup tight end Devon Cajuste (and his healing crystals), and defensive end/financial advisor Carl Nassib, who all missed the cut. There is always some drama and heartache watching the featured players deal with the disappointment of getting cut. The humanity and business of football, all at once.

Of course, all of those plot lines have little bearing on the Browns' regular season, which kicks off this Sunday against the Steelers. We're left with a number of questions, chief among them: at what point will they hand the keys to Baker Mayfield, and will they be proven right for taking him with the No. 1 pick in the draft? Hue Jackson sure think so.

Equally significant, will Hue Jackson survive as the head coach? With new offensive coordinator Todd Haley, who was brought in by new GM John Dorsey, openly questioning Jackson’s authority, is Jackson being set up to take the fall if the Browns don't perform? We'll find out very soon.

In the end, you have to give it up to Hard Knocks for making us somehow care about a team that went 1-31 the last two seasons. It's not TV. It's HBO. And the NFL. Week 1 is upon us. We made it.