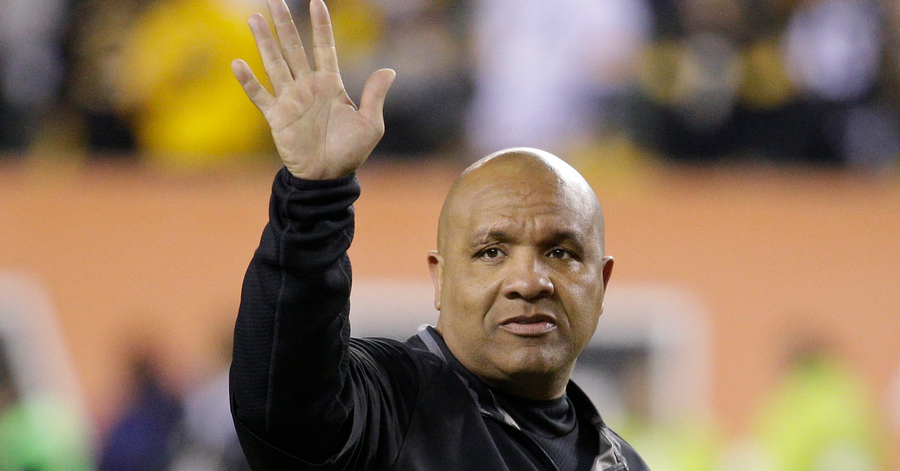 From hot days to hot takes to Hard Knocks, each week we'll give you all the 2018 NFL Preseason news you can handle in under three minutes. (Disclaimer: You can stay longer than three minutes. Time is relative.) Here's the best of the NFL from  Preseason week 1.

After a glitzy NFL draft dominated by quarterback drama at the very top, all eyes are on the first-round signal-callers in training camps, especially as most teams approach their first pre-season games this week.

So who’s making the strongest impression among the Big Four of Baker Mayfield, Sam Darnold, Josh Allen, and Josh Rosen?

Darnold, who went No. 3 overall to the Jets, has generated the most attention, showing off his accuracy, his ability to extend plays with his legs, and his acumen in reading pro defenses, making his progressions and finding secondary receivers.

The ex-USC star has been so impressive that one of the guys he’s competing with, Teddy Bridgewater, sounded like someone in the Jets' corporate offices selling season tickets as he sung Darnold's praises.

“That guy, he’s cool,” Bridgewater told reporters in Jets’ camp. “Seems like a guy you can’t break. He’s even-keeled. He makes throws and it’s like, ‘Man, this guy, he’s the real deal. He gets it.’ “

Forgive Jets' fans for being both jacked for Darnold's pre-season debut Friday against the Falcons, yet wary of the early hype. They've only been waiting for a star quarterback since Broadway Joe Namath's knees went bad nearly 50 years ago, and the decades of disappointment have left some scars, to say the least.

In any case, if he lives up to the early raves, Darnold almost certainly has the best shot of any of the rookies to open the season as the starter, the competition being 39-year old Josh McCown, and Bridgewater, still fighting his way back from a devastating knee injury.

As for the others, the reviews have been more typical of rookies getting their first taste of life in the NFL, with the expected growing pains. As Cardinals’ new offensive coordinator Mike McCoy told reporters, speaking of Rosen’s early work in camp:

“Josh is like every rookie. There’s the good days, the good plays, and there’s that one or two plays you look at and say, ‘Didn’t we just go over that in the meeting? Were you not listening?’

Ah, the perils of going with a young quarterback.

In Buffalo, meanwhile, the job seems to be there for the taking, with career backups A.J. McCarron and Nathan Peterman as the competition for Josh Allen. However, reports out of Bills’ camp indicate the No. 7 pick out of Wyoming has been inaccurate in throwing drills, which was the knock on him coming out of college, making it unlikely he’ll win the starting job there.

Obviously it can take time to absorb the intricacies of calling the shots in the NFL, which is why the Bills will almost certainly sit Allen this year, the Cardinals are likely to open the season with Sam Bradford over Rosen, the No. 10 pick in the draft from UCLA, and the Browns with Tyrod Taylor over Mayfield, the No. 1 overall pick from Oklahoma.

All Mayfield All The Time

Step inside the @Browns quarterbacks' inner sanctum. @bakermayfield shows us what's happening in the RV. ?#HardKnocksNow

No surprise Mayfield was the center of attention in the first episode of HBO's Hard Knocks, featuring the Browns this year. The Heisman Trophy winner was shown in a good light, other than his Bob Evans moment, that is.

Trying to decide on where to eat when he first arrives to training camp, Mayfield, looking at his phone, says, "Bob Evans is really good." Followed soon by: "I didn't know Bob Evans is a chain."

Ok, it's not quite Jared Goff famously being confused about whether the sun rises in the east or west, as the Rams' then-rookie QB let the world know on Hard Knocks two years ago. But...really, Baker?

In any case, HBO does make Mayfield look good in his on-the-field action in the first episode, yet most intriguing is a brief conversation between him and Hue Jackson, in which the head coach not-so-subtly suggests the rookie might want to get to camp in the morning as early as the veteran newcomer, Tyrod Taylor.

"You ever come in with your boy, No. 5?" Jackson asks at one point.

And when Mayfield shrugs off the question, saying Taylor has his own workout program, Jackson follows up by saying, "You starting your career how you want to."

Which sounded like code for, "All eyes are on you, kid. You should be the first one in the building."

For all the focus on Mayfield, dazzling wide receiver Jarvis Landry emerges as the star of the first Hard Knocks episode, starting with his expletive-filled speech telling his fellow Browns that, as a newcomer, he won't tolerate the losing that has made the franchise the laughingstock of the league. Suffice it to say even Rex Ryan might have blushed at Landry's volume of profanity, but, hey, if any team needs shock therapy, it's the Browns.

And Landry wasted no time in backing up his talk with his signature one-handed catches on the field, including one in live drills that he turned into a touchdown, prompting one unnamed teammate to say excitedly: "We got us a playmaker."

So can Landry, who led the NFL in receptions with the Dolphins last year before being traded, be the catalyst to lead the Browns out of the wilderness?

Can Mayfield beat out Taylor?

Can Jackson and new offensive coordinator Todd Haley, who was shown questioning whether the head coach is being tough enough on his players, co-exist without killing each other?

This Hard Knocks has some promise.

Lamar Jackson, the fifth quarterback taken in the first round, at No. 32 by the Ravens, did nothing to ease concerns about his ability to throw from the pocket in his first game action. Playing the entire second half of the Ravens' 17-16 win over the Bears in last weeks' Hall of Fame game, Jackson showed off his electrifying running ability, but completed only 4-of-10 passes while throwing an interception.

Ravens’ coach John Harbaugh was complimentary, noting that Jackson’s protection from his offensive line broke down too often, but the consensus among observers was that the former Louisville star has a long way to go in his decision-making and throwing mechanics.

As such the debate in Baltimore is now whether the Ravens need to keep three quarterbacks, with Robert Grfiffin III backing up Joe Flacco ahead of Jackson.

Griffin, the one-time star for the Redskins, had a solid outing in the win over the Bears, as he tries to come back from injuries that left him without a team for all of the 2017 season.

Two of the sport’s biggest stars are seeking new, huge contracts, but Aaron Donald and Odell Beckham Jr. are going about such business in completely different ways:

Donald, arguably the NFL’s best defensive lineman, continues his holdout from Rams’ camp, with such little optimism for a deal that coach Sean McVay said Monday: “I don’t think anything is going to change with that in the near future.”

Meanwhile, Beckham, perhaps the league’s most electrifying wide receiver, continues to practice with the Giants, demonstrating that he is back to form after suffering a broken ankle last season, making head-turning catches on a daily basis.

Whether Beckman will risk injury by playing in pre-season games, however, as negotiations are ongoing, remains to be seen.