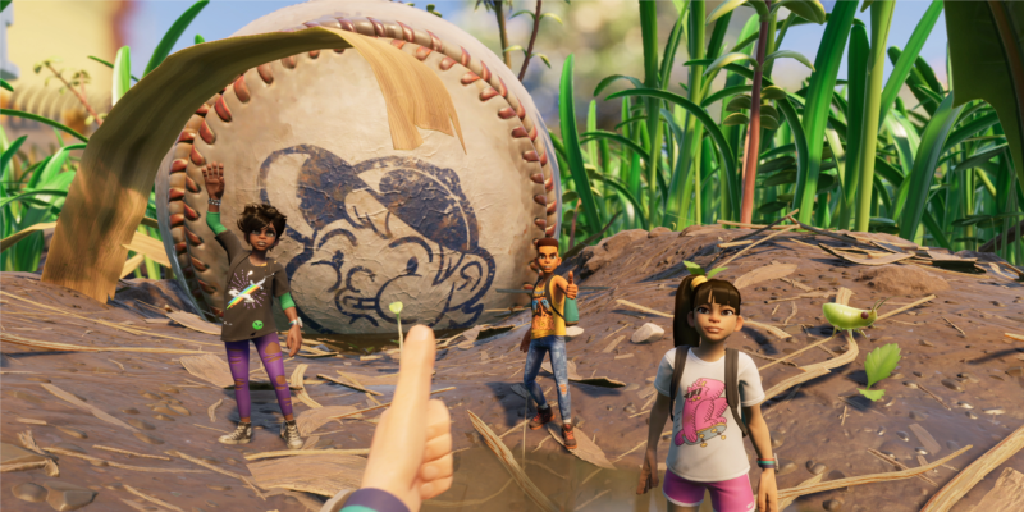 Grounded, which is releasing in early access on Xbox One and PC in spring 2020 (digitally and as part of Xbox Game Pass), is an up-to-four-player survival game set apart largely by its tiny setting. You play as an intrepid child who’s been shrunken down to the size of an ant as part of a science experiment that strikes me as massively unethical. The whole world is very literally your backyard; because you’re so small, this makes for a sizable map on which to craft items and build bases using everyday objects that, to you, are as big as houses. As you are the size of an ant, you’ll also encounter ants and other creatures that are the (relative) size of you.

It’s a departure for Obsidian, a studio best-known for story-driven RPGs like the aforementioned Outer Worlds, Pillars of Eternity, and Fallout: New Vegas. Then again, Obsidian also spent two years working on multiplayer tank battle hootenanny Armored Warfare, so it’s not like it hasn’t added a little jalapeno to its bread and butter before.

Update 4:30 PM ET: A couple weeks ago, I attended a preview event for Grounded at Obsidian’s offices in Irvine, California. At the time, the game did not have a final name yet, and Obsidian was calling it a survival RPG, rather than a “survival adventure,” which is the current marketing line. After a 30-minute hands-off demo, I came away more intrigued than I initially expected to be. The main beats—explore, collect materials, use them to work through a crafting tree and construct an increasingly elaborate base—will be familiar to anybody who’s played a survival game before, but Obsidian’s dedication to its Honey I Shrunk Somebody Else’s Kids concept is what won me over. There’s just something innately charming about a setting where skyscraper-tall blades of grass give way to equally gargantuan juice boxes.

What really piqued my interest, though, was the fully functioning ecosystem that Obsidian says underlies it all. Creatures—most of them insects—exist in hierarchies and hunt, collaborate, and fight to survive just like players. Players, who eat by killing and eating creatures like aphids, can and likely will knock this delicate balance disastrously askew.

“You can go through and wipe out an ant colony,” director Adam Brennecke told Kotaku. “Each ant colony is its own AI system, which is cool. Each ant colony will send out ants to food sources, and they communicate with each other through pheromones. But they’re each on their own faction or team. So some ant colonies can rise to dominance and some will die out.”

Obsidian has “talked about” implementing a full, New Vegas-style faction system for those ant colonies, but it remains to be seen if that will make it into the release version.

I asked Brennecke if it will be possible to wipe out an entire species, full stop. He said yes, and that the repercussions will be grim.

“It will be possible,” he said, using aphids as an example. “And then, for example, ladybugs hunt aphids, so they’ll start to die out, too.”

Grounded’s other distinguishing feature in a crowded survival field is a story with characters and, true to Obsidian’s legacy, a branching narrative that’s impacted by player choice. The story will focus on the fact that the machine you’re using to shrink is busted, and you’ve got to find a way to get big again. Though there won’t be any traditional RPG-style companions, Brennecke said you’ll interact with “memorable” characters and learn the backstory of your backyard and who invented the shrinking machines by way of environmental storytelling and audio logs.

“That’s something I think will be new to the survival genre,” he said of Grounded’s branching, character-driven narrative.

Exploration, too, will be a product of the environment you’re inhabiting. During the demo, Brennecke and other members of the development team spelunked a portion of an ant hill, which contained hostile soldier ants and, at its heart, a queen. They also stealthed past a giant spider, which was thankfully asleep during the day, but which would have assuredly wrecked a new character’s shit if it was up and skittering about. Instead of level-based progression, areas are gated based on which items you’ve figured out how to craft. For example, at one point during the demo, a player came across a giant Tic Tac box that contained precious, minty resources, but which they could not crack open without a mysterious additional implement, possibly also made of a household item. There are multiple biomes with different resources, but early on, there are many things you can only look at, rather than touch, with your flimsy axe made of sticks and your base walls made of grass. In a particularly charming moment, Brennecke and company crafted armor out of acorns, preparing themselves for a harsher journey ahead.

Plenty of Grounded’s inhabitants are friendly. Worker ants, for example, paid players no mind, while larger creatures like ladybugs and spiders were (at least temporarily) more interested in hunting each other than bite-sized humans. Thus, I was required by law to ask: Will we be able to pet friendly insects? Outrageously, it’s not currently possible—even though Brennecke confessed to following the “Can You Pet The Dog” Twitter account—but it’s something the team hopes to add before Grounded enters early access next year.

It remains to be seen whether or not Grounded can grow into a truly unique experience, or whether it’ll wind up becoming just another survival game with an insectoid gimmick—an Obsidian game that’s buggy in a different, less notable way than we’re used to. Brennecke and the game’s 13-person team definitely seemed excited about the project, and they say they’re pleased that Microsoft—who entered the picture after work on the project began, purchasing Obsidian in the fall of 2018—has given the game its blessing. Grounded is a departure, to be sure, but it’s the game that Brennecke, formerly a lead on the Pillars of Eternity team, wants to be making right now.

“Pillars is a hardcore, very deep RPG,” he said. “During that time period [that I was working on it], survival games just kind of spawned out of nowhere. I really enjoyed playing them, and so did people on the team. From Rust to Subnautica to The Forest, there’s a lot of different ways of approaching the survival genre. We got really excited about it and played a lot of those games during our lunch break or after work.”

The goal, then, is to make another game people like Grounded’s own development team won’t be able to stop thinking about. And if that means players contribute ideas during the game’s early access phrase, so much the better.

“The game is so approachable, and everyone has a good sense of what to expect,” said Brennecke. “I think everyone can be a game designer in some way and think of cool ideas of what could be in this world. As a game developer, that’s super exciting. Everyone can kind of see themselves in this fantasy.”

This article was written by Nathan Grayson from Kotaku and was legally licensed through the NewsCred publisher network. Please direct all licensing questions to legal@newscred.com.