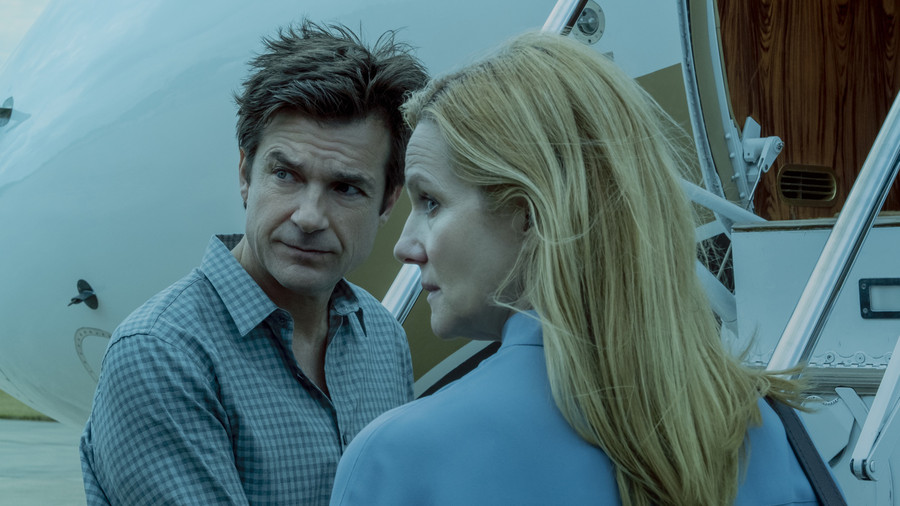 ‘Ozark’ Season 4: Everything We Know So Far

A killer is coming to Ozark season 4! The final season of Netflix's crime drama is bringing on Run the Jewels rapper Killer Mike for a major cameo.

Ozark season 4 is currently filming the super-sized last chapter, though production may continue a while yet. Cast member Charlie Tahan recently told NME, "COVID [has] slowed things down quite a bit but we’re moving along pretty well."

Ozark follows Marty Byrde (Jason Bateman) after he gets in trouble with a Mexican cartel and relocates his family to Missouri's Lake of the Ozarks region to set up an even bigger money laundering scheme for them. After settling down into the area, he and wife Wendy (Laura Linney) become involved with local criminals like the Langmore and Snell families, as well as the Kansas City Mafia.

Ozark followed in the mold of Breaking Bad, which also revolved around an average family man turning into a criminal antihero. And like that series, Ozark became a perennial awards nominee (and winner). Bateman won a SAG Award, while Garner took home her second straight Supporting Actress Emmy last fall.

The final season will be supersized, with a total of 14 episodes divided between two halves.

"We're so happy Netflix recognized the importance of giving Ozark more time to end the Byrdes' saga right," showrunner Chris Mundy said in a statement. "It's been such a great adventure for all of us — both on screen and off — so we're thrilled to get the chance to bring it home in the most fulfilling way possible."

Here's what we know so far about Ozark season 4.

Ozark season 4 does not have a release date on Netflix yet — not that that's prevented fans (and others) from speculating as to when it might arrive.

Netflix first announced in June 2020 that Ozark would return for a fourth and final season. Even with production delays brought on by the pandemic, many fans believed season 4 might premiere by late 2021, though that may well prove to be little more than wishful thinking.

An April earnings letter to Netflix shareholders, for instance, didn't mention Ozark among the projects arriving by Q4 2021 — though the list did include The Witcher season 2 and Cobra Kai season 4.

We do know that the final season will be divided into two parts, and given Netflix's lack of information about a possible release date, it's looking like part 1 will be released in early 2022, while part 2 arrives later next year. But this is still speculation, so we'll have to wait until we get official word before we can mark our calendars and start counting down the days.

Due to those standards, Jason Bateman may not direct any episodes in the final season, though he has helmed the first two episodes of the three previous seasons.

“As normal, I was going to do the first two episodes, but as we were looking through the protocols, the guidelines, all the complications with COVID, [and] the producer side of me made me think it’s just not responsible to have one of the actors direct the first two, given that we’re still going to be getting our perimeter safe,” Bateman told IndieWire.

“Because if one of the actors gets sick, we all have to go home for weeks. If one of the crew members gets sick — while I’m making sure their salary is protected while they’re in quarantine — we can hire a replacement. So it just didn’t seem smart for me to [direct] the first two [episodes].”

Robin Wright (yes, the star of House of Cards) is directing an episode this season. "I'm so thankful for all of you," she wrote in the caption, referring to the cast and crew. The photo reveals she was directing a scene in the casino.

Sorry, but Ozark season 4 doesn't have a trailer yet.

Ignore all those YouTube videos claiming to be Ozark season 4 trailers; they're all fan-made fakes.

Netflix did release a short teaser when it announced Ozark season 4 would be the last. It featured a cool, transforming graphic that changed from crosshairs to a dollar sign to the number four.

When can fans expect to see an Ozark season 4 trailer? Possibly when filming wraps. Other Netflix series, like The Witcher, have posted a behind-the-scenes teaser video when production was over.

Another possibility is that Netflix drops an Ozark trailer during the 2021 Emmys, which is scheduled for Sept. 19, 2021. The show is a perennial nominee, so it's the perfect opportunity to remind viewers that the final season is on its way.

Ozark's final season will have 14 episodes, which is more than the 10 episodes of each previous seasons. The 14 episodes will be divided into two parts of seven episodes each.

"A super sized season means super sized problems for the Byrdes," Bateman said. "I'm excited to end with a bang(s)."

So far, we only know the title for Ozark season 4, episode 1: "The Beginning of the End." Very appropriate.

Also returning for season 4 is Julia Garner as Ruth Langmore, a member of a local crime family.

They will be be joined by:

Several cast members will not be returning (unless via flashback) because their characters died in season 3. They include Janet McTeer as cartel attorney Helen Pierce, Tom Pelphrey as Wendy's brother Ben, and Marylouise Burke as therapist Sue Shelby.

Some new faces are hopping on board Ozark season 4. Bruce Davison is joining the cast as retired Illinois Senator Randall Schafer. More new cast members include: Alfonso Herrera as Javi, a member of the Navarro cartel; Bruno Bichir as Navarro's priest; Adam Rothenberg as private investigator Mel Sattem; CC Castillo as Sheriff Leigh Guerrero; and Katrina Lenk as Clare Shaw, the CEO of a biopharmaceutical firm.

Run the Jewels rapper Killer Mike is making a cameo appearance in one episode, where he'll interact with Ruth Langmore at her lowest point, according to Billboard.

"I went from waiting to find out what happens next to being part of it ... I'm excited, " Killer Mike said.

Other additions, according to The Hollywood Reporter, include Veronica Falcón as Camila, the sister of drug cartel leader Omar Navarro, and Ali Stroker as Charles-Ann, an old pal of Ruth’s mother. Both are said to have recurring guest roles in the final season.

Ozark season 4 will pick up right where the finale left off, with Marty and Wendy witnessing Helen Pierce get shot and killed at the hands of Navarro.

During a Deadline panel, Bateman said, "The next season, the first episode, is Laura [Linney] and [me] looking in the mirror just after that moment, cleaning Janet [McTeer] out of our hair. It's a nice 10 minutes later pick-up from it."

The Byrdes are now even more tied to Navarro, but they have other problems besides the cartel boss. Ruth has turned against them and is now working for Darlene Snell.

Showrunner Chris Mundy told EW.com, "I think [season 4] will be about whether or not Ruth really can create something of her own that she wants and is sustainable, or if she wants something else. And I think it will be about if the Byrdes can they turn the biggest mistake of their lives into this huge advantage, and how much will karma catch up with them if they do?"

Meanwhile, cast member Charlie Tahan, who plays Wyatt Langmore in the show, has told NME that he has found his character's development "nerve-wracking."

“With an ongoing show, you don’t have all the scripts, it goes on for years. So you know, you have no idea how the show’s going to turn out… But I mean I have a lot of trust with the writers at Ozark,” he said.

Ozark fans are also speculating about a possible showdown between Jonah Byrde and Nelson, the cartel enforcer who killed Jonah's Uncle Ben. The two had a close bond and Jonah angrily shot a gun after learning of Ben's death. Actor Nelson Bonilla, who plays hitman Nelson, recently shared an Instagram story that confirmed his return to the show.

This article was written by Kelly Woo from Tom's Guide and was legally licensed through the Industry Dive publisher network. Please direct all licensing questions to legal@industrydive.com.