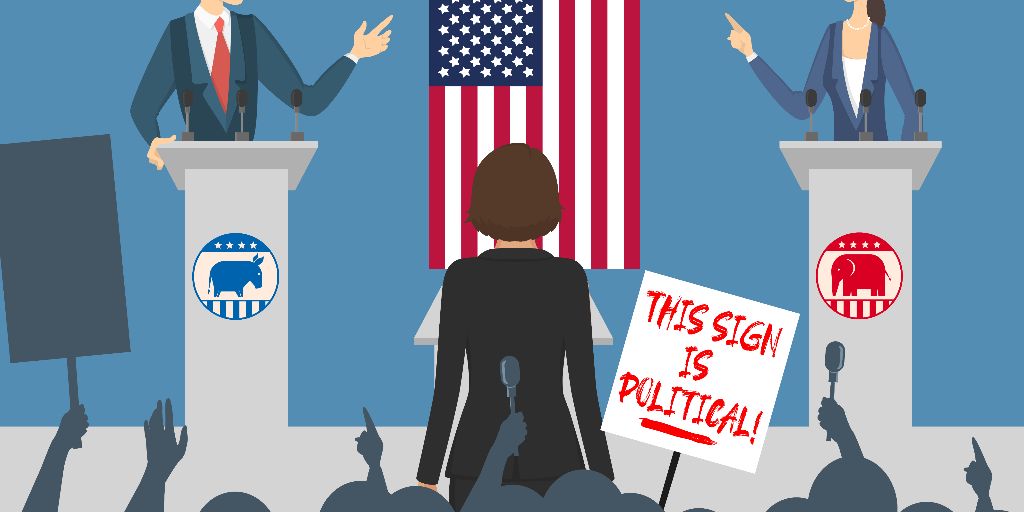 From the widespread national trust in FDR’s leadership (check out the electoral map of his landslide victory in 1936) to the modern sense of disillusionment with career politicians, American trust in The System ebbs and flows. A lot. With it, the depiction of American politics in film and television has also varied, serving as a semi-accurate barometer of the country’s political climate.

Ranging from saccharine optimism to blistering mistrust, the spectrum of politics on film is a fun peek into the cultural zeitgeist. Our continuum starts with the most optimistic property and ends with the darkest and most cynical.

Frank Capra’s classic tale of a wholesome, honest politician who single-handedly takes on political corruption in Washington is one of the most beloved films of all time — and one of the most politically optimistic. In the climactic final scene, Jefferson Smith (Jimmy Stewart) collapses on the Senate floor after delivering an hours-long filibuster speech. His cause appears lost, but his unwavering integrity ultimately sways a colleague to do the right thing.

The movie was released right in the middle of FDR’s long presidency. Considering the public trust Roosevelt earned with his famous fireside chats (not to mention his sweeping welfare state expansion), it makes sense that the film would adopt such a sunny outlook on politics. To this day, it’s the gold standard of political idealism.

Obama, an energetic and educated orator very much in the mold of Bartlett, won in 2008 on a platform of hope that even Sorkin’s characters could get behind. In fact, a number of Obama’s staffers admit that The West Wing inspired them to seek political careers. The show tapped into a cultural moment of optimism and change—even if it couldn’t quite predict what came next.

Executive producers Robert and Michelle King are best known for their hit legal drama The Good Wife and its spin-off The Good Fight. Like a weird sister, BrainDead has similar genes but a very different personality. Bursting with sharp, funny dialogue and an all-star cast, the show is a political intrigue in horror movie clothes, bravely asking the question, “What if the reason the 2016 presidential election was so polarizing was that people’s brains were being eaten by alien space bugs?” It's a wild ride but one that's kept fun my a stellar Tony Shalhoub, an excellent pairing in Mary Elizabeth Winstead and Aaron Tveit, and the catchiest "Previously On" segments ever (you'll see!).

Alexander Payne’s cult hit tells the story of a vicious high school student body election. Hyper-focused senior Tracy Flick (Reese Witherspoon) is determined to become class president, but her path to election is complicated by a disgruntled social studies teacher (Matthew Broderick) who tries everything within his power to make sure she doesn’t win—up to and including tampering with votes.

There are no heroes among Payne’s petty, venal cast of characters. The film was partly inspired by the events of the 1992 presidential election—and yes, a Ross Perot-like figure throws a surprise wrench into the results.

John Frankenheimer’s celebrated political thriller is based on the 1959 Richard Condon novel of the same name. It tells the story of a Korean War veteran who is activated as a sleeper agent for an international communist conspiracy to bring down the American government.

In a climate of Cold War hysteria and communist fearmongering, the film paints an accurate picture of some of the deepest cultural anxieties of that time period. Were there literal sleeper agents poised to take down the government? Perhaps not, but the performances are timeless: Frank Sinatra proves his acting chops opposite a chilling Angela Lansbury.

Barry Levinson’s 1997 black comedy follows the coverup of a presidential sex scandal with a fake war to distract the public. The film was released one month before news broke of President Clinton’s sex scandal with then-intern Monica Lewinsky. When the Clinton Administration bombed the Al-Shifa pharmaceutical factory in Sudan shortly thereafter (and initiated a bombing campaign in Iraq just prior to his impeachment proceedings), the media couldn’t help but draw comparisons.

On the surface, Wag the Dog seems pretty cynical, with its amoral political operatives pulling levers behind the scenes. However, its entire plot hinges on the idea that someone, somewhere, is really in charge. A glimmer of hope but just barely.

You can’t expect a film about the Watergate scandal to be sunny. Alan J. Pakula’s much-lauded adaptation of the book by Bernstein and Woodward, the reporters who uncovered the scandal, faithfully chronicles the revelation of Nixon’s involvement and the essential, though precarious, role of investigative journalism in national politics.

The film is as methodical as the reporting process, weaving a web that ever-so-slowly tightens around the White House. In the end, the good guys win—sort of. The movie’s final scene depicts Woodward and Bernstein tap-tap-tapping out their latest findings while Nixon’s second inauguration blares from the TV.

Pakula’s methodical pacing and dark mise-en-scène ain’t got nothing on Andrew Fleming’s Dick, a trippy, woozy spoof of the same events. In it, two high school girls get caught up in the Watergate scandal, which in this adaptation is perpetrated by a cast of bumbling clowns from the alt-comedy world (including Will Ferrell as Bob Woodward). Future indie darlings Michelle Williams and Kirsten Dunst portray boy-crazy teens with crackerjack timing and their trademark sensitivity.

Is it factual? Definitely not, but re-imagining a serious scandal as a dumb farce is a commentary on our political system. It’s much more cynical than All the President’s Men. In fact, it’s more like...

HBO’s award-winning satire captured audiences and critics alike with a bold proposition: that politics are stupid. The show follows Vice President Selina Meyer (Julia Louis-Dreyfus) as she and her team navigate the daily quagmire of Washington bureaucracy, complete with egomaniacal interns, self-involved politicos, and the accidental, hilarious ineptitude of the rich and powerful.

“The road to power is paved with hypocrisy and casualties,” opines House of Cards anti-hero/protagonist Frank Underwood. “Never regret.”

The show follows that sentiment to its logical conclusion, painting Washington politics as a brutal, unforgiving game played by the privileged and power-hungry. In a cut-throat, “post-truth” political arena, House of Cards doesn’t hesitate to point out the base motivations of public servants.

Whether you trust the system or not, DIRECTV has a show for that. Follow all things political, fact and fiction, with hundreds of channels and options.