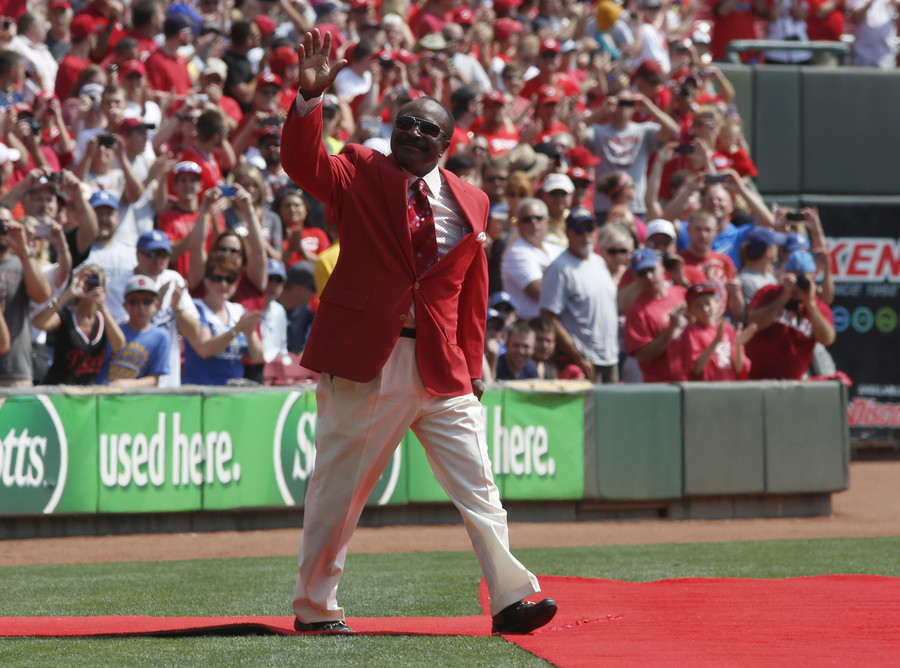 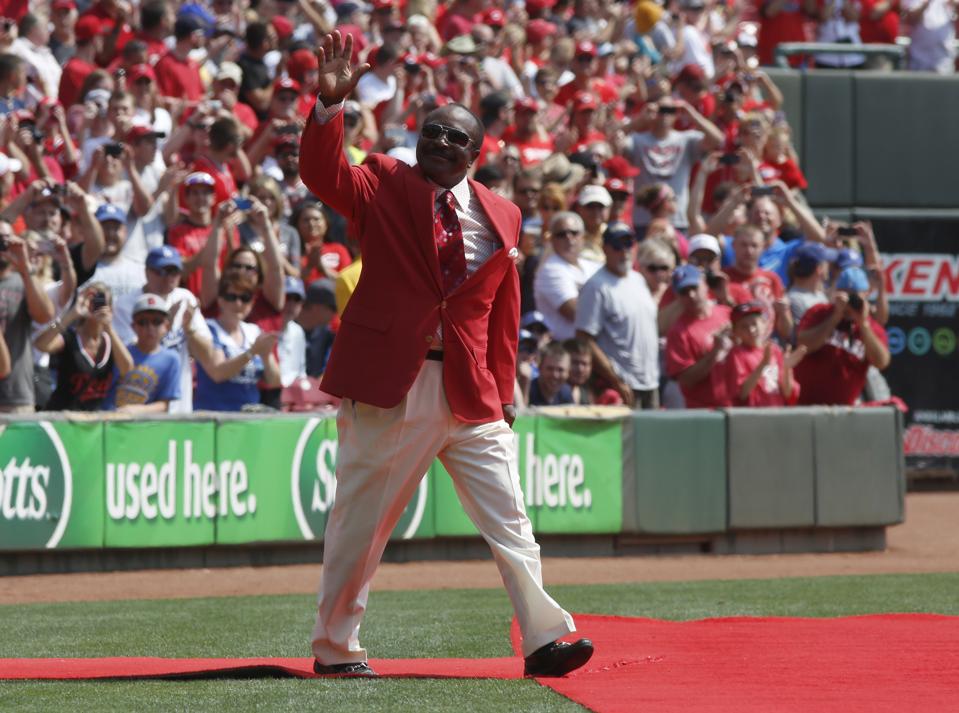 So I just heard Joe Morgan died, and for me, he was many things, ranging from a cog on my Big Red Machine of the 1970s to a Baseball Hall of Famer who remains peerless among second basemen to a national MLB broadcaster with an always honest tongue.

Those were huge things.

Then I reached for the book, and I remembered.

Regarding the essence of Joe Leonard Morgan, you could take the lengths of his 2,517 hits, 1,133 RBIs, 689 stolen bases and 268 home runs, and you could stack them end to end, and all of those other things I just mentioned still would sit farther behind something else.

On the inside cover of the 1993 autobiography called Joe Morgan: A Life in Baseball, the author wrote the following:

We have been fighting some of these battles for a long time. 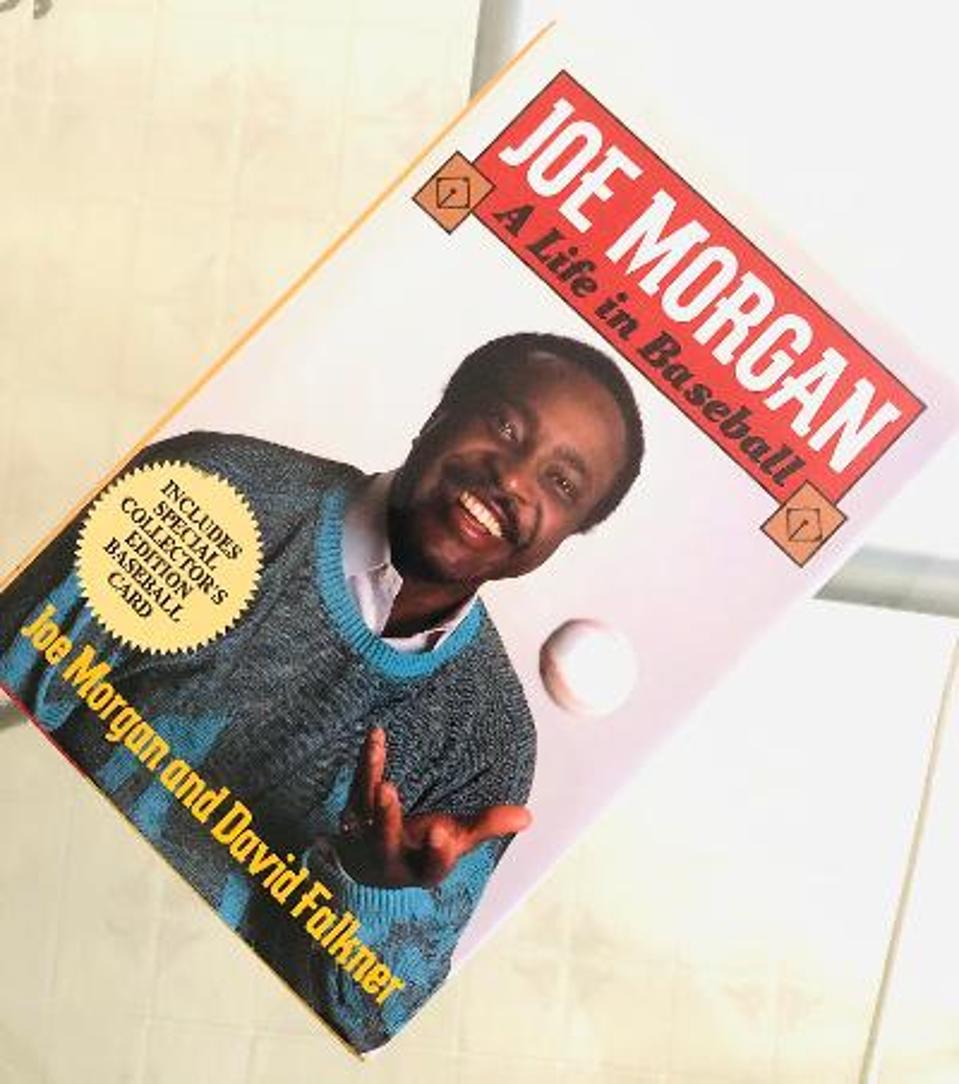 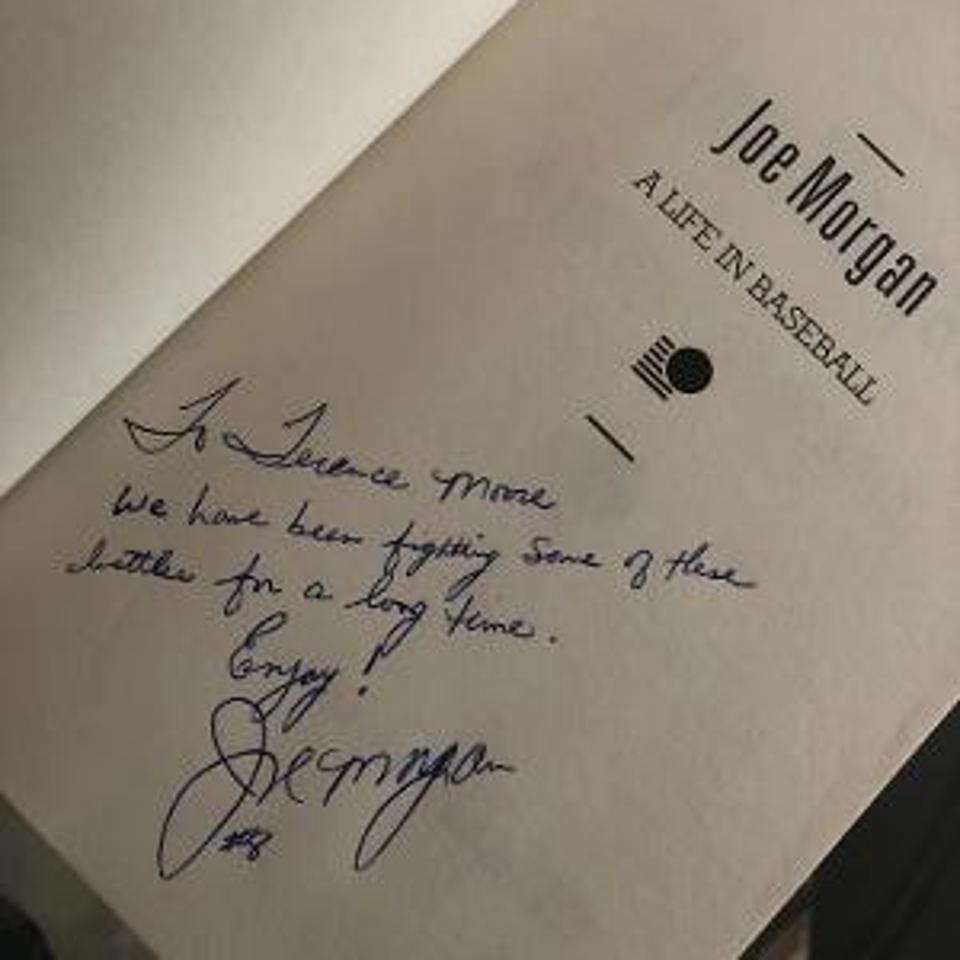 On an inside page of Joe Morgan's autobiography, he wrote these words to Terence Moore, a diehard follower of Morgan's Big Red Machine during the 1970s, and Moore later became a journalist who covered the Baseball Hall of Fame second baseman during

They involved Morgan and me using whatever we had to expose racial injustice, not only around society, but in Major League Baseball, where the percentage of Black players has dropped from around 27% during the mid-1970s, according to my research with the San Francisco Examiner in the early 1980s, to 7.8% right now, according to USA Today in a sport that nevertheless made a record $10.7 billion last season, according to Forbes.

Morgan saw this coming. As a proud African American, born in Bonham, Texas before spending most of his life in Oakland, California, he was into the Black Lives Matter movement before it became fashionable in sports. He bore his soul on civil rights to anybody who would listen.

At least one person always did.

When I heard Morgan died, I remembered how he joined Pete Rose on those lordly Cincinnati Reds teams to help a young Black journalist (OK, me), fresh out of nearby Miami (Ohio) University during the late 1970s, feel less awkward conversing with guys he viewed as gods as a baseball fan growing up in the Midwest.

Never once did Morgan refuse one of my interview requests, and occasionally, he provided a story or three involving manager Sparky Anderson, slugger Johnny Bench or others on a team that won more games during the 1970s than anybody, including back-to-back world champions through 1976.

I remembered 1981 and 1982, when Morgan joined the San Francisco Giants near the end of his 22 years in the Major Leagues, and I was covering the team for the San Francisco Examiner. We collaborated on a series called “Blacks In Baseball” featuring executives, players and mangers speaking on the record about how they believed their game had a quota system regarding Blacks.

“If you’re not looking for them, you’re not going to find them,” Morgan told me at the time, mentioning the lack of Black scouts in the game.

Worse, I discovered while researching the series that baseball was the only major sport with a slot for race on its scouting reports. 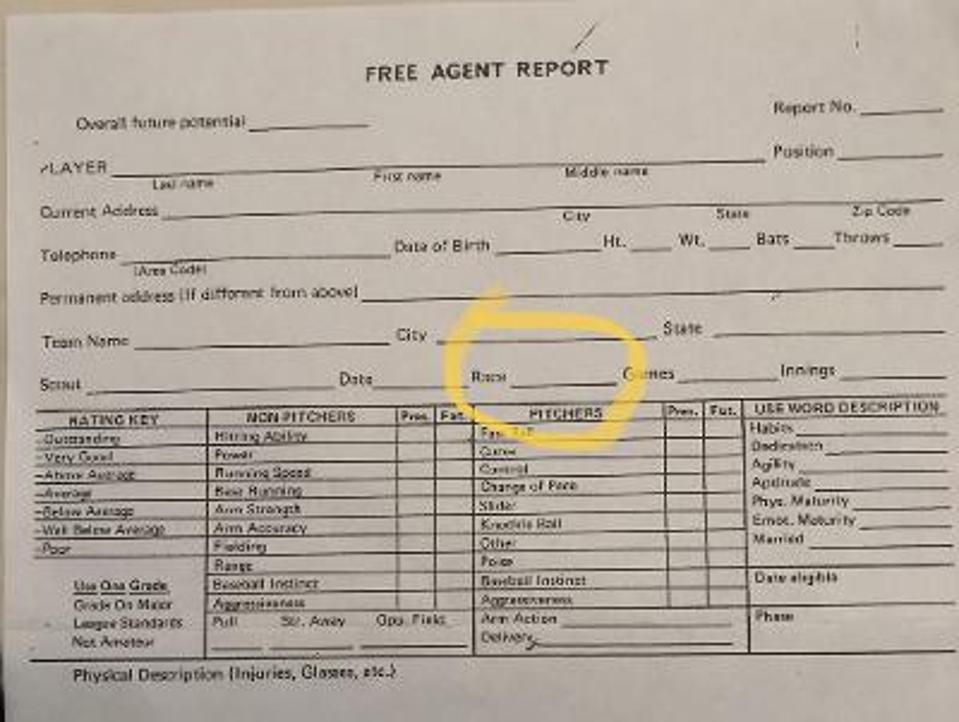 During 1982 research by Terence Moore for a series called "Blacks in Baseball" for the San Francisco Examiner, he discovered MLB was the only major sport with a slot for race on its scouting reports.

When I confronted then-Baseball Commissioner Bowie Kuhn about the practice, he denied it, but after I faxed him one of the scouting reports, he quickly sent an order to all MLB teams to have “race” removed.

“It doesn’t matter,” Morgan said later, shrugging. “They’ll still put little symbols on the scouting reports to indicate who’s who and what’s what.”

In general, I remembered most of my face-to-face conversations with Morgan, and they lasted anywhere from 20 minutes (never less than that) to infinity in clubhouses, dugouts, ballpark grandstands and hotel lobbies.

There also were our marathon phone calls before Morgan spent the stretch drive of his 77 years on earth suffering from non-specified polyneuropathy, leading to his death Monday.

I remembered the baseball things, too.

During the winter of 1971, I cried when my Reds sent popular players Lee May and Tommy Helms to the Houston Astros in a package deal for center fielder Cesar Geronimo (a future perennial Gold Glove winner), Jack Billingham (a future starting pitcher), infielder Denis Menke (a future splendid utility player) and Ed Armbrister (a future superb pinch hitter who helped them win a World Series game).

The Reds also got Morgan.

Just like that, I forgot about those tears for “Lee and Tommy, who?” after watching the magic of this power-hitting second baseman, with the Gold Glove, swift feet and ability to make “clutch” a routine word.

It likely wasn’t a coincidence Morgan won consecutive National League Most Valuable Player Awards in 1975 and 1976, when the Reds grabbed their World Series titles, and he made 10 trips to the All-Star Game.

Through it all, here was my favorite Morgan baseball moment: Game 5 of the 1972 World Series in Oakland. Ninth inning.

Reds up by one.

With one out and an A’s runner at third, Morgan sprinted beyond first base in the massive foul territory of the Oakland Alameda County Coliseum to catch a pop fly. He slipped on the wet grass, but he caught himself and whirled a strike to Bench at home to nail pinch runner Blue Moon Odom to end the game.

Even though the Reds lost in seven, Morgan’s play still rocked.

This article was written by Terence Moore from Forbes and was legally licensed through the Industry Dive publisher network. Please direct all licensing questions to legal@industrydive.com.