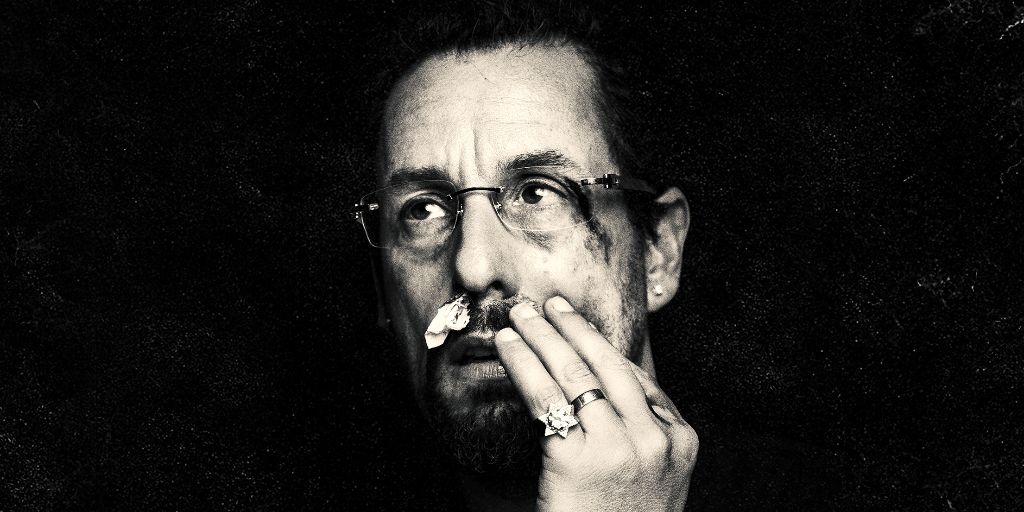 Review: Adam Sandler Gives the Performance of His Career in the Razor-Sharp ‘Uncut Gems’

"Uncut Gems" begins with a grim jolt of 21st century realism somewhere in the Welo opal mines of Ethiopia, where a worker has been seriously injured in an accident. But within moments the action has taken on a dark, primordial undertow, a rumble of something as ancient as fable or myth. After pausing to take in the grisly scene, the camera darts after two men who, amid the bloody chaos, have sneaked back into the mine, like bandits raiding a cave of wonders. They pry loose a lump of rock embedded with several shimmering gemstones, an ill-gotten treasure that is about to change quite a few lives, none for the better.

By the next scene, after an extraordinary visual transition that should be seen on the biggest screen possible, we are in the company of Howard Ratner (Adam Sandler), a fast-talking, middle-aged jewelry dealer who owns a store in Manhattan's diamond district. We won't see the miners again, but the ominous voices we hear in the opening moments of Howard's story might as well be theirs. Rising and surging with Daniel Lopatin's propulsive electronic score, they suggest a kind of anguished Greek chorus, unleashing a doom-laden prophecy that will be fulfilled over the course of this great, queasy rush of a movie.

Directed with relentless tension and diamond-hard intelligence by Josh and Benny Safdie (who earlier this month won directing honors from the New York Film Critics Circle), "Uncut Gems" is a thriller and a character study, a tragedy and a blast. It's a throwback to the sordid '70s crime pictures once popularized by filmmakers including Martin Scorsese (a credited producer) but also a snapshot of a highly specific time and place — one informed by stories the Safdies heard from their father, who worked in the diamond district himself.

Much of the action flows in and out of Howard's 47th Street shop, where diamond-studded Furbies line the fluorescent-lighted display cases, and all manner of customers, some of them famous, are held temporarily at bay by a buzzer-operated door. It's springtime 2012, as you might guess when you hear that Kevin Garnett is playing for the Boston Celtics and the Weeknd is in New York on his first U.S. tour, to name two real-life celebrities whose paths will intersect with Howard's in wittily unpredictable fashion.

But the celebrity you may be most surprised to encounter in this grotty world of black-market jewelry and high-stakes sports betting is Adam Sandler himself. His presence here is its own kind of gamble, and it pays off beautifully. The Safdie brothers ("Heaven Knows What," "Daddy Longlegs") have a long-standing affinity for characters who test the audience's patience, who confront the world with their ambitions and nerve endings exposed. Howard might be a distant Jewish cousin of Robert Pattinson's reckless crook from "Good Time"; he is both a clearly recognizable figure and, in Sandler's hands, a twitchy, nervy departure.

His latest foolhardy scheme rests on those stolen opals, which function on one level as a classic movie MacGuffin — an accursed, much-coveted artifact that rapidly changes hands, sowing confusion and bad blood in its wake. But they also serve to position Howard's antics in the context of a global industry that thrives on exploitation and vanity, and which draws the attention of tchotchke-seeking celebrities such as Garnett (giving a shrewd, self-effacing performance). There's some other merchandise in the mix as well — a sports-memorabilia ring, a few hot Rolexes — whose purpose and monetary value can fluctuate as violently as Howard's moods, whims and circumstances.

Howard is thus an avatar of greed, lust, desperation and bravado, a human pinball careening from one bad decision to the next. He's as flashy and tacky as his wares, with his leather jacket and bad goatee. He's a faithless husband, a lousy father and a hopeless addict, flushing money away on sports bets and trying to outwit the nasty loan sharks on his tail. For all that, he is hardly the most obnoxious character Sandler has played during his long and lucrative reign as king of the Hollywood idiot comedy. Nor is he the first example of a sharply drawn, painfully human figure to pop up on this actor's erratic resume, as admirers of "Punch-Drunk Love" and "The Meyerowitz Stories" will already know.

What Howard Ratner may be is the most inescapable of Sandler's characters — the role it will be hardest for him to top as an actor, and also the one from whom the audience is granted the least physical or psychological distance. The splendidly versatile cinematographer Darius Khondji ("The Lost City of Z," "Amour"), shooting on gleaming 35-millimeter film, keeps Howard locked in the camera's sights as he barrels his way forward. The soundtrack is a jittery symphony of wheeling and dealing, cursing and threat making, sometimes exacerbated by the din of radio chatter, agitated smartphones and the live basketball broadcasts whose every twist and turn can send Howard lurching in a new direction.

Sandler radiates so much manic, self-destructive energy that the terrific supporting cast can't help but feed on it. Lakeith Stanfield plays a business associate who hustles and bickers as aggressively as he does, while Julia Fox is especially vivid as Howard's trusty store clerk, who also happens to be his girlfriend. Meanwhile, Howard pathetically cajoles his estranged and neglected family members, including a soon-to-be-former wife, Dinah (Idina Menzel, as magnificently chilly here as in the "Frozen" movies). Business has a way of mucking up even family occasions, whether it's a Passover seder (presided over by an excellent Judd Hirsch) or his daughter's school play.

Watching Howard work overtime can be exhausting. Watching Sandler do it is oddly refreshing. In recent studio misfires like "Pixels" or Netflix disposables like "Murder Mystery," the actor's familiar shtick has seemed to arise not from a place of gutsy transgressive comedy, but from a zone of laziness and complacency, as if he couldn't even muster enough energy to laugh his way to the bank. "Uncut Gems" reignites his fires and then some, partly because he's playing someone so driven, who adores the thrill of the chase and takes an almost sexual ecstasy in every payoff.

But it's also partly because Howard — flamboyant, shameless, loathsome and intermittently lovable — charges so many of Sandler's familiar expressions and gestures with searing new energy and purpose. There's the voice that can descend to a gently coaxing tone and then rise to a high-pitched squawk of anger, the attitude that can seem mean and calculating one minute and endearingly dull-witted the next. There is also Sandler's Jewish-American identity, which he has mined for laughs throughout his career and which the directors slyly nudge into both background and foreground.

The Safdies sometimes like to play with fire when it comes to race (see "Good Time" — seriously), and in "Uncut Gems," they seem eager to both court and refute accusations that they're trafficking in their own culture's stereotypes. Is Howard Ratner a caricature of the aggressively in-your-face, virulently dishonest Jewish businessman, or does Sandler's virtuosity render him too singular, too human a creation to be dismissed so reductively? You might as well ask whether, by the end of this invigorating, maddening movie, this impossible tragicomic figure has lost his soul or gained the world.

This article is written by By Justin Chang from The Los Angeles Times and was legally licensed via the Tribune Content Agency through the NewsCred publisher network. Please direct all licensing questions to legal@newscred.com.