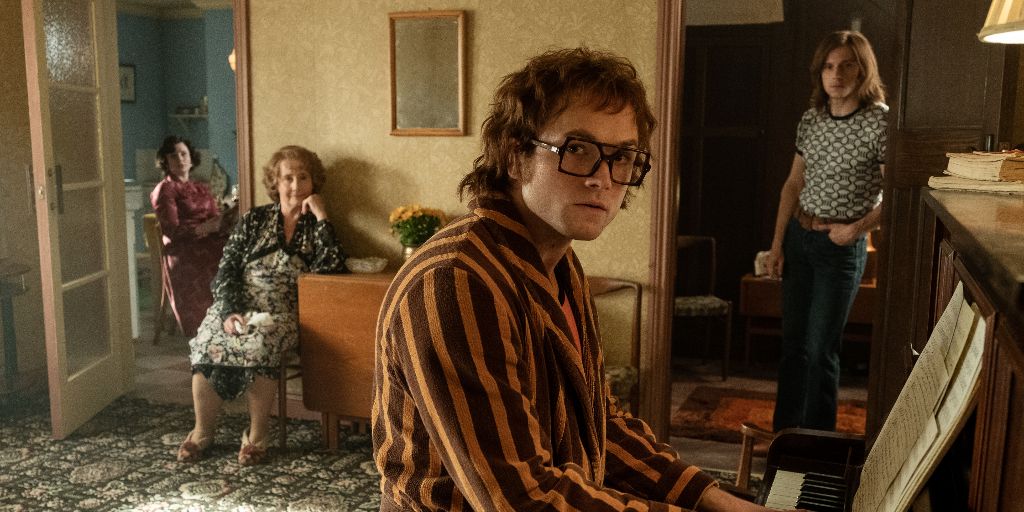 Who was The Rocketman?

He was an alcoholic. And a cocaine addict. And a sex addict. And a bulimic. And a shopaholic who has problems with weed, prescription drugs, and anger management.

He was Elton Hercules John. All of those things come straight from the horse's mouth at the start of "Rocketman."

Well, scratch that. Actually, those words come straight out of the mouth of Taron Egerton, the man playing Elton John in the movie.

That's something we need to keep in mind during all of this. It's only a movie. Even as a film depicting the real-life of Sir Elton John, it is still a film that makes quite a few embellishes in depicting the truth, as most biopics tend to do.

Biopics are meant to serve as a highlight reel for the most lavish parts of the subject's life, or at least the most captivating. There certainly wasn't anything lavish about John's alcoholism or cocaine addiction, but they are parts that make the whole an interesting watch.

At its core, "Rocketman" is a fantasy tale. That should be evident by the opening scene, from the moment we see Elton John walk into rehab while wearing a horned devil costume before singing to a younger version of himself staring at him casually from across the room. Although, the part about him leaving a concert in that costume to enter rehab is true, believe it or not.

Elton John has always led a fantastical life and much of his life sounds too preposterous to be true. But as a fantasy musical, "Rocketman" expects its audience to suspend their disbelief in everything they see. No one fully believes there was ever a moment where Elton John, his friends, and family all broke out into choreographed song and dance at a moment's notice because unless it happens on a closed set with cameras rolling, that's not how real life works.

But does it make for a memorable piece of cinema? It sure does, and that was the primary intent of director Dexter Fletcher.

“What I care about is capturing moments cinematically and musically,” he told Rolling Stone prior to the film's release. “I have to take artistic license, which is what Elton said I should do. He’s a creative, artistic person and that’s the way we approached it.” To create a biopic that leaps out of its big theatrical screen format and touches its audiences emotionally, some dramatizations needs to be made and further exaggerated. This is exactly what Fletcher set out to do with Rocketman and in both regards, what he successfully achieved.

Even something as simple as the origins of Elton John's stage name had to be dramatized for show. While Elton did borrow his first name from his friend and early blues bandmate, Elton Dean, his surname was adopted from his mentor and fellow musician, Long John Baldry. Of course, to the filmmakers at least, that's not nearly as tantalizing as the thought of Elton being inspired by the image of John Lennon before dubbing his last name. Meanwhile, Baldry doesn't so much as get a mere name drop in the film.

Beyond some white lies here and there, the biggest embellishes which "Rocketman" makes are in regard to times and places. The instances in regards to where and when certain events actually occur wind up getting tweaked to fit the larger narrative of the film. Elton John married Renate Blauel in 1984, not 1979. Elton John did not meet his ex-lover/manager John Reid the night he made his US performing debut at the Troubadour in the summer of 1970 but at a Christmas party later that year.

We can spend all day and night nitpicking what big or small historical inaccuracies exist within the world of Rocketman as so much of its information is readily available at our fingertips with a quick Google search fact-checking everything that is said and done in the film. However, in the larger scheme of things, does any of it really matter?

Does it really matter that "I'm Still Standing" was written and released seven years prior to when he sobered up in rehab, contrary to what the film suggests? Does it matter that Elton, in the film, circa 1967 auditions for publisher Dick James by performing two songs - "Daniel" and "I Guess That's Why They Call It Blues" - which were not even written respectively until 1972 and 1983?

Even the aspect of time inaccuracies could be forgiven as another cinematic liberty that Dexter Fletcher takes in the film. After all, the entire film is told from the perspective of Elton John himself, who as a character telling his story in a rehab clinic is serving as an unreliable narrator. Even in the flashbacks, Elton - drugged and drunk out of his mind - often finds himself hopping forward in time, unsure of where he is when he comes to. When the story is told by a character whose brain is a little jumbled, we should expect the story itself to be a little jumbled.

But creative liberties or otherwise, the bottom line is that none of these embellishments matter when the film ultimately entertains its audience. The film has a Rotten Tomatoes score of 89% with a solid IMDB rating of 7.3 out of 10. On top of that, both Taron Egerton and the film itself (Best Motion Picture - Musical or Comedy) received Golden Globe nominations this year for the work they put in, with Egerton walking away with the Best Actor award.

For what it's worth, in many ways, "Rocketman" still does a better job than most in the biopic genre at not only keeping the facts straight but compacting the greatest hits of a chart-topping musician's life into a two-hour time slot. But whatever truths "Rocketman" gets right doesn't matter as long as people love the film. And there's a lot about the film worth loving beyond its facts or fictions.

"Rocketman" is still an entertaining, must-see romp that die-hard Elton John fans are going to appreciate for capturing the spirit of The Rocketman himself while younger audiences will appreciate a deeper glimpse into the life of an iconic figure.

The film is shocking, ridiculous, bizarre, incoherent, complicated, funny, and loads of fun.

But then again, so is The Rocketman.