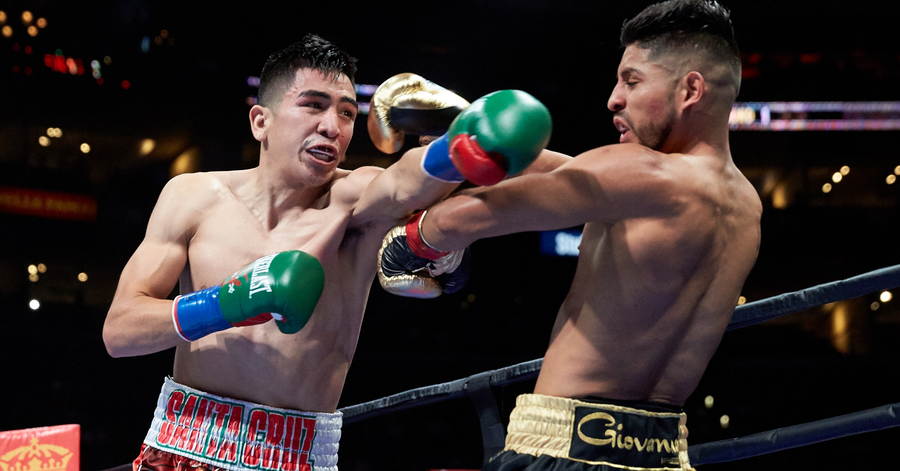 Santa Cruz vs. Mares II: The Battle for LA Is On

Saturday night’s showdown at Staples Center between Leo Santa Cruz and Abner Mares is a highly anticipated rematch that brings together two Mexican-American champions for what pundits have termed a “classic Los Angeles slugfest.” The June 9th rematch will air exclusively on SHOWTIME Championship Boxing. The first fight, in 2015, was a strong candidate for fight of the year. Santa Cruz won a bruising 12-round brawl in which the boxers combined to trade more than 2,000 punches. The rematch is being informally billed as “The Battle for LA,” since both fighters are longtime area residents. Both boxers will also put coveted belts on the line. Santa Cruz will defend his WBA (super) featherweight title while Mares will risk his (regular) featherweight belt.

Check out the highlights from their epic first meeting...

The chance to unify belts in a tough featherweight division has both boxers locked in. Santa Cruz is trained by his father Jose, who is recovering from a long bout with spinal cancer and whose dedication to Leo's success is a continual inspiration for the fighter. Santa Cruz has said his father has focused his training for the rematch on power and endurance, having the 29-year old spar 13 rounds rather than 12, to ensure his son is prepared for Saturday’s showdown. After two rugged battles with Irishman Carl Frampton, first losing and then regaining his title, Santa Cruz demolished Chris Avalos last October with an eighth-round TKO. He has said he expects a smarter Abner Mares to enter the ring on Saturday.

Since losing to Santa Cruz, Mares has refashioned his training regimen, parting ways with longtime trainer Clemente Medina and hiring the highly esteemed Robert Garcia. Garcia, a former IBF junior lightweight champion himself, has twice been named Trainer of the Year, by The Ring Magazine in 2011 and by the Boxing Writers Association of America in 2012. Garcia has trained numerous fighters of note, including Nonito Donaire, Victor Ortiz, Marcos Maidana, and Fernando Vargas, among others. Yet Garcia only took the job when Mares agreed to do things his way--in his camp.

That meant training an hour from home at Garcia’s Riverside gym, not in Mares’ own closer and more comfortable Bell Gardens gym. It meant adopting the schedule Garcia set for him. It meant sticking to Garcia’s fight plans, something he didn’t necessarily do while fighting for Medina. But Mares quickly embraced Garcia's leadership.

Garcia is characteristically confident going into the rematch. “I can see—I can’t say an easy fight—but a comfortable win for Abner Mares,” the trainer conceded after a recent training session. “I’m a more mature and seasoned fighter,” Mares added, anticipating a different outcome on Saturday night. Either way, as Santa Cruz has pointed out, “The winner is going to be the king of LA.” And one step closer to unifying all the division titles, which presently sit in four different camps.

Titles. Future paydays. SoCal bragging rights. It all adds up to a high-stakes clash that will shape the legacies of two of the sport's most decorated boxers. If this bout is anything like the first, you won't want to miss it.

Catch all the action this Saturday on SHOWTIME Championship Boxing.