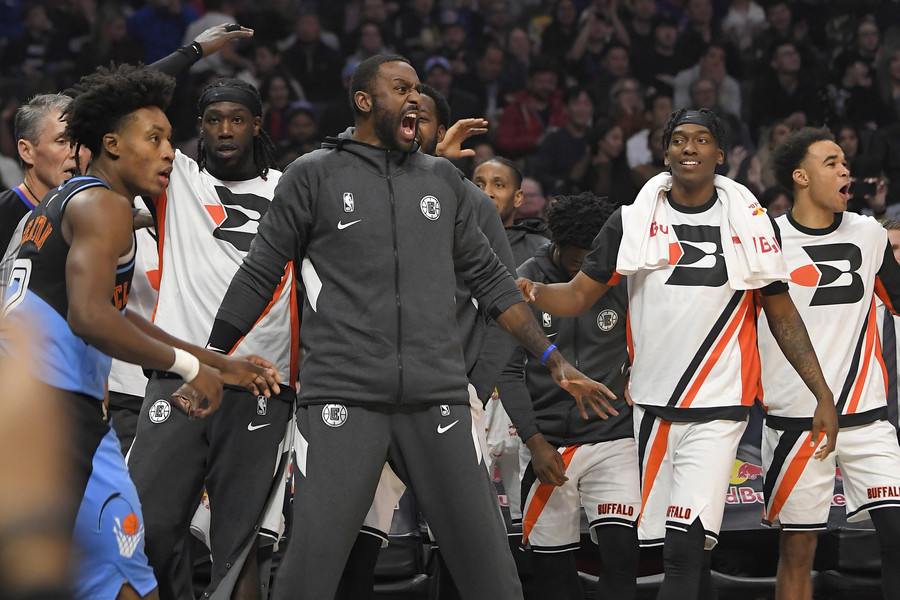 LAKE BUENA VISTA, Fla. (AP) — Dion Waiters took an open 3-opener and about 75 feet away, a dozen or so of his Los Angeles Lakers teammates all seemed to leap from their seats in unison.

“SAY CHEESE!” they yelled, dragging out the last syllable for effect.

At Staples Center back in Los Angeles, such a yell would have been heard by the Jack Nicholson-types in the super-expensive seats. But at the NBA restart, where the only fans inside the building are the ones wearing uniforms, that sort of enthusiasm is most definitely getting noticed.

At the scrimmage games at Walt Disney World over the past few days, bench energy has been real — and often loud.

“It’s a bunch of different things that they’ll be screaming,” said Waiters, whose teammates were playing off his ‘Philly Cheese’ nickname with the salute they directed his way. “But it feels good. That’s the only thing I got. Some guys like myself, we like to play off the crowd and their enjoyment. But the teammates, they’re there, supporting you. It’s a win-win.”

There will be some crowd-noise elements when the seeding games — essentially the resumption of the regular season — begin Thursday night. Music will blare and the 17-foot video boards surrounding three sides of the courts in each arena will even sometimes show real fans who logged in to “cheer” for their team.

But the biggest source of cheerleading will come from the benches, and some coaches are even encouraging players not in the game to be active that way.

“To reference that and try to coach it and try to praise it, it’s on my mind,” Philadelphia coach Brett Brown said. “To ignore it and not reference it, I don’t do that.”

Brown’s 76ers had the NBA’s best home record this season, going 29-2 in games at Wells Fargo Center. He’d love to see his players replicate that energy in all the neutral-site games that will be played the rest of the way this season.

“You have to decide where you want to spend your money and that one is important to me,” Brown said. “You’re talking about our spirit enduring. Anything you can do to help that — point it out, praise it, coach it — is on my mind.”

When Deandre Ayton of the Phoenix Suns made a 3-pointer in a scrimmage on Sunday against Boston, something he’s never done in a “real” game during his two NBA seasons, some of his teammates leaped over the video board at the corner of their bench and onto the floor in celebration.

Hours later, in that same bench area for the next game, Carmelo Anthony of the Portland Trail Blazers spent much of the fourth quarter leaning on the top of that video screen and barking out encouragement. And when little-used players get a chance to score in these scrimmages, their teammates have made sure they hear the instant celebration.

“I’ve always thought, for the most part, benches do that anyway,” Los Angeles Clippers coach Doc Rivers said. “I just think you don’t notice it because the fans are making so much noise. But good teams’ benches are alive, very active, very verbal — probably too verbal sometimes.”

Miami coach Erik Spoelstra said the bench activity can help what’s happening on the court and has encouraged the Heat to “be mindful” of those situations.

“When the energy or momentum swings, you don’t want it to be quiet,” Spoelstra said. “We need to be intentional about doing that.”

Toronto coach Nick Nurse said he isn’t sure if the bench energy — and the volume — will remain cranked when the games start counting later this week. But he likes that players already have a clear understanding that the energy that often comes from crowds, whether they’re cheering or booing, will have to come now from a much smaller group.

Rivers is certain of one thing: Games won’t seen quiet, no matter what.

“I think the NBA will keep figuring out ways of creating noise,” Rivers said. “I know they don’t want to hear the coaches yelling. So, if I’m them, I would create more noise.”