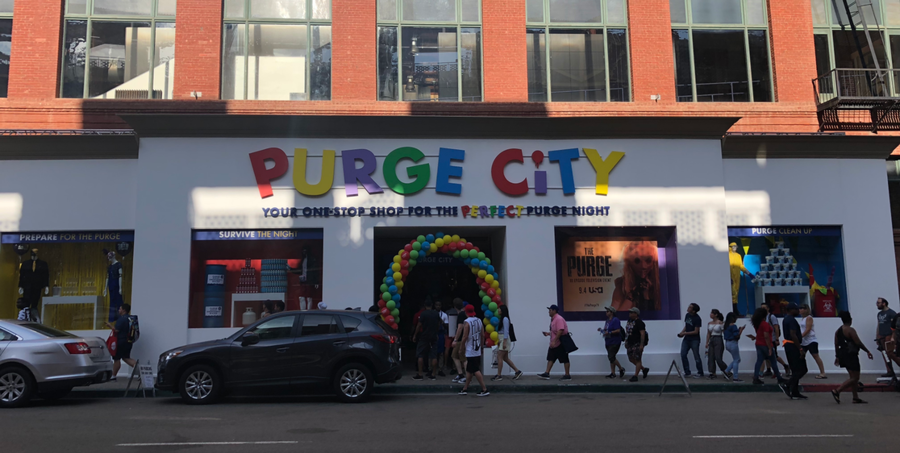 Blessed Be America: New Details, Crimes, and Characters for The Purge TV Series

After releasing four wildly successful films — NPR notes they made 2,000 percent of their budget at the worldwide box office —  in just five years, The Purge franchise is bringing its terrifying concept to the small screen. The TV series will premiere September 4th on the USA Network.

At Comic-Con, the show's cast and crew revealed some juicy details to whet fans' appetites. Showrunner Tom Kelly noted that the television format gives more time to focus on the characters:

“The movies are great, but what a 10-hour series gives you is it opens up the story. It was really fun to take an established brand and brilliant premise and expand on it with storytelling.

And it's not SDCC if there's not a new trailer drop:

Gabriel Chavarria, who plays one of the show leads (Miguel), helped set some context for how the TV show fits into the movies' timeline. He explained, "Our show takes place 10 years after the first purge. As the season starts, we’re right before commencement for Purge Night."

(I'm not sure what you buy for the 10-year anniversary of The Purge, but it's probably not diamonds. Armor? Coincidentally, the show's savvy marketing team took over a nearby storefront at SDCC to sell everything you'd need for a Purge night.)

Unsurprisingly, Chavarria's character finds himself constantly in danger. “Everyone’s his enemy just because he’s trying to find his sister,” said Chavarria. “He’s trying to gather all this information in the streets during the purge, so he’s coming up against all different kinds of crazy people throughout the night.”

The storytelling won’t always be linear, though. Chavarria added, “We use a lot of flashbacks. It helps us understand why the characters are in the place they are now.”

Fiona Dourif (who was majestic on the cancelled-too-soon Dirk Gently's Holistic Detective Agency) also gave insight into her character: Good Leader Tavis. "She’s a true believer [in the purge]," Dourif said about her character, who, if the trailer is any indication, seems to have a Handmaid-esque cult.

The role was originally written for a male, but Dourif’s audition was so good that she earned the role. Dourif said, “Absolutely nothing was changed from the role [after being hired].” She added, “[As Good Leader Tavis] I am driven, passionate, and ambitious as ****.”

The show will premiere exactly two months after the big screen release of The First Purge film, and I'm excited and a little nervous to see how the actors and creators will bring the tension of the films to my living room.