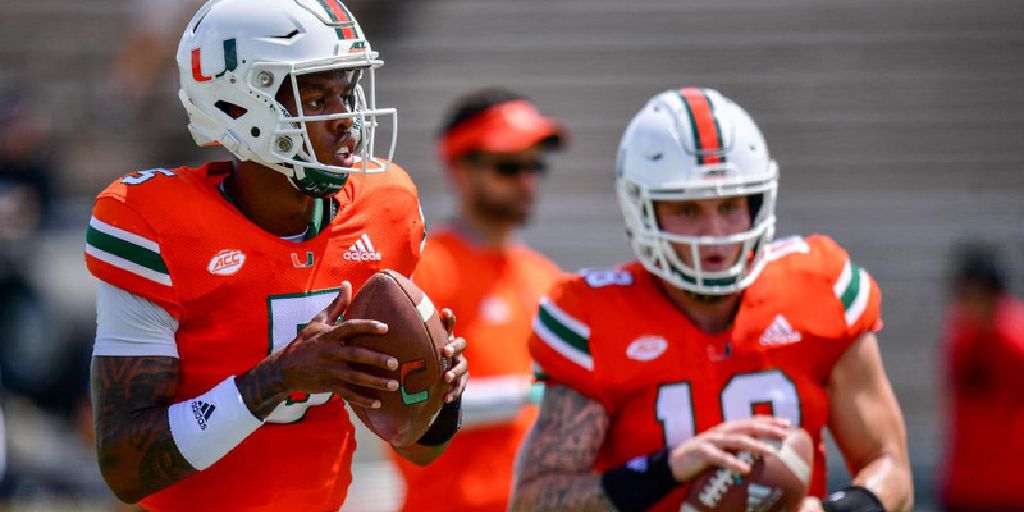 College football season is upon us! There’s only one month left until Miami and Florida kick the year off in Orlando, which means fall camp is about to start everywhere. This season can fairly be designated as one of those “Year of the Quarterbacks,” with so many teams anchored by a star QB. Clemson’s Trevor Lawrence, Alabama’s Tua Tagovailoa and Oregon’s Justin Herbert will lead this conversation, while Texas’s Sam Ehlinger, LSU’s Joe Burrow and Georgia’s Jake Fromm will be a reason why their teams contend for the College Football Playoff or not. There are plenty more intriguing guys to keep eyes on this fall, including Ohio State’s Justin Fields, who transferred from Georgia in the offseason; Houston’s D’Eriq King, who battled injuries last season but is back and ready to play for new coach Dana Holgorsen; and Nebraska’s Adrian Martinez, who enters his second year as the face of Scott Frost’s rebuild.

There are a few coaches who haven’t named a starter yet and are letting that competition boil as long as possible. Here’s a look at some of the most intriguing jobs still up for grabs:

Herm Edwards goes into fall camp with a four-way quarterback battle on his hands. This was always going to be the case after spring ball wrapped up with Arizona State needing to replace three-year starter Manny Wilkins. Redshirt junior Dillon Sterling-Cole is the lone familiar face after backing up Wilkins in 2019, and he appears to be the leading candidate. The obvious reason is his experience, but he also impressively dropped 25 pounds in the offseason, which caught people’s attention in the Sun Devils’ spring game. But there’s certainly a legitimate competition going on with ASU bringing in one of the best quarterback classes in the country. Jayden Daniels was the No. 2 dual-threat in the 2019 class and has plenty of potential. Once camp gets rolling, we’ll see how far ahead he is of fellow early enrollees, Ethan Long and Joey Yellen.

The biggest storyline for Auburn throughout fall camp will be figuring out the QB situation between freshmen Joey Gatewood and Bo Nix. Nix, the son of former Auburn quarterback Patrick Nix, was the No. 1 dual-threat QB in the 2019 class and enrolled early. He’s athletic, eager and has a legitimate chance to win the job. His main competition is Gatewood, a 6’5”, 237-pound redshirt freshman that has attempted only one pass and had three carries for 28 yards last season. Gus Malzahn needs to make a decision here quickly with Auburn opening the season at home against Oregon and future NFL first-rounder Herbert.

James Blackman is the obvious candidate to replace Deondre Francois, who was dismissed from the team in February. Blackman, who took advantage of the new redshirt rule last season and played in just four games, threw for 415 yards and three touchdowns in the Seminoles’ spring game. He’s the clear leader—and the only QB on the roster who has played in this offense—but the job is not totally his yet. There’s Louisville transfer Jordan Travis, who is still waiting for the NCAA to make a decision regarding his immediate eligibility, and Wisconsin transfer Alex Hornibrook, who gives FSU depth. Hornibrook, a graduate student who was granted immediate eligibility, battled concussion issues last year, but he did go 26–6 with the Badgers.

This will be the first real big decision for first-year coach Manny Diaz. Ohio State transfer Tate Martell—who left the Buckeyes program when Georgia’s Justin Fields transferred there—is the favorite to win the Miami QB job after receiving an NCAA waiver granting him immediate eligibility. But he hasn’t earned it yet. He’s battling with redshirt sophomore N’Kosi Perry, who struggled last year while splitting time under center with Malik Rosier, and Jarren Williams, a strong-armed redshirt freshman who tweeted, “Nothing excites me more than competition” when Martell announced he was coming to Miami. Diaz is working hard to revamp the Hurricanes' culture and knows how important it is to find the right quarterback.

For all the excitement and hype surrounding Jalen Hurts, he hasn’t actually been named Oklahoma’s starting quarterback yet. The Alabama transfer went 26–2 as a starter and won a national championship certainly. He definitely has a leg up on his competition: redshirt freshman Tanner Mordecai and incoming five-star QB Spencer Rattler, but Lincoln Riley has been firm on this topic. The head coach told reporters at Big 12 media days recently that he would be sending the wrong message to his team if he brought in a new guy and anointed him the starter right away. Still, it's a safe bet to assume Hurts will lead the Sooners this season and maybe be the next great transfer quarterback following Baker Mayfield and Kyler Murray. But he will definitely have to work for it.

The Horned Frogs have lots and lots of options at quarterback heading into camp. With former starter Shawn Robinson transferring to Missouri, coach Gary Patterson turns his focus to these guys: There’s true freshman Max Duggan, the No. 3 dual-threat quarterback in the nation who was the Iowa Gatorade Player of the Year; redshirt freshman Justin Rogers, a highly touted recruit from Louisiana who sustained a devastating knee injury his senior year and is still not 100%; Michael Collins, who was Robinson’s backup last year but had offseason surgery and missed the spring; and the most experienced of all and favorite to win the job is Kansas State transfer Alex Delton, who was a captain for the Wildcats last year.

The Badgers' QB situation got a little complicated when veteran Alex Hornibrook transferred to Florida State in the spring. Now, Wisconsin will have a new starter for the first time since 2016. It will either be 6’3”, 205-pound true freshman Graham Mertz, a top QB prospect who had offers from Alabama, Clemson and Georgia, or Jack Coan, who played in five games for UW last year, including a start in the Pinstripe Bowl blowout over Miami. Mertz might have a leg up in this one, despite his youth. He was the 2018 Gatorade Player of the Year in Kansas and passed for 3,886 yards and 51 touchdowns as a high school senior.

This article was written by Laken Litman from Sports Illustrated and was legally licensed through the NewsCred publisher network. Please direct all licensing questions to legal@newscred.com.