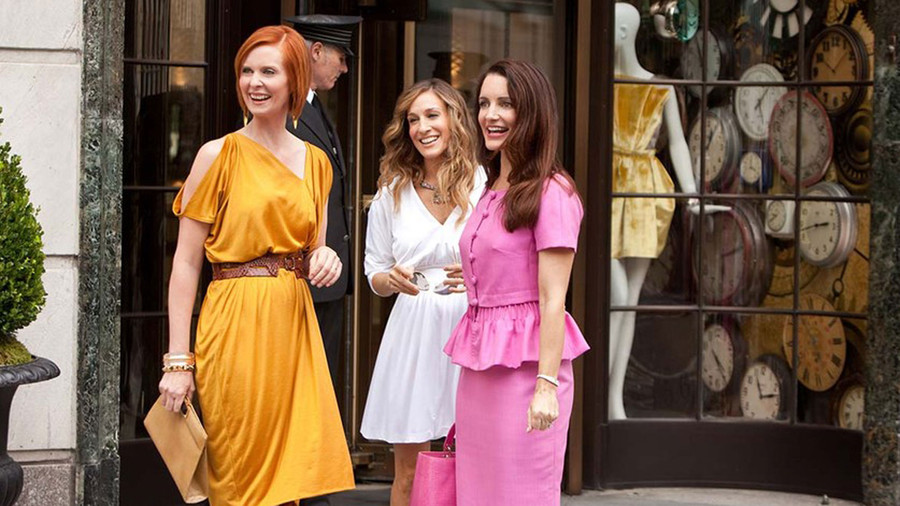 The Sex and the City reboot is a go at HBO Max — but with a key character missing. We couldn't help but wonder: Is it still SATC without the core four?

The Sex and the City revival, titled And Just Like That, will follow Carrie, Miranda and Charlotte as they navigate love and friendship in their 50s, but Samantha won't be appearing. Original stars Sarah Jessica Parker, Kristin Davis and Cynthia Nixon made the announcement on social media. But Kim Cattrall is not signed on for the sequel series. She has clashed with Parker in the past and has openly advocated for her role to be recast.

Sex and the City, based on essays written by Candice Bushnell, ran for six seasons from 1998-2008 on HBO and won several Emmys, including Outstanding Comedy Series. The show focused on four single women and their romantic relationships in New York City. It spawned two feature films in 2008 and 2010 as well The Carrie Diaries, a prequel series on The CW.

And Just Like That will consist of 10 half-hour episodes. Original series creator Darren Star is not involved, though Michael Patrick King (who directed episodes and wrote/directed both of the feature films) is executive producing.

Here's everything we know so far about the Sex and the City reboot.

HBO Max has not set a release date for And Just Like That.

Production on the series is expected to begin in late spring in New York. After filming and post-production, the SATC revival could premiere as soon as late fall 2021. But we're guessing the release date is closer to spring 2022.

Sex and the City reboot cast

And Just Like That will be headlined by three of the four original series stars: Sarah Jessica Parker as Carrie Bradshaw, Kristin Davis as Charlotte York Goldenblatt and Cynthia Nixon as Miranda Hobbes.

The fourth cast member, Kim Cattrall, is not reprising her role as Samantha Jones.

Cattrall and Parker's longtime feud has been extensively reported by many media outlets, including the NY Post. Cattrall herself has been open about the subject. After her brother died, Cattrall blasted Parker on Instagram: "You are not my friend. So I’m writing to tell you one last time to stop exploiting our tragedy in order to restore your ‘nice girl’ persona."

In 2017, when talk of a third Sex and the City movie began to swirl, Cattrall made it clear she would not be in it or any other SATC project in the future.

After the announcement of the revival series, Parker replied to Instagram comments about Cattrall's absence. In one response, she said, "I don't dislike her. I've never said that. Never would. Samantha isn't part of this story. But she will always be part of us." To another commenter's suggestion that the role be recast, Parker said, "We have some new stories to tell. We are excited."

Other SATC revival cast members have not been announced, but it's possible we may see these original series stars:

We may also see older versions of Miranda's son, Brady, and Charlotte's daughters, Lily and Rose.

Sex and the City reboot trailer

The SATC revival trailer won't come out until filming is completed (or at least underway), but as part of the announcement, the stars released a teaser video. It features footage of NYC with flashes of a computer screen with the words "And just like that …” and “The story continues …"

A photo posted by on

Sex and the City reboot plot and spoilers

So far, all we know is that And Just Like That will follow Carrie, Miranda and Charlotte's friendship and love lives in their 50s.

Last we saw them in the Sex and the City 2 movie, all three were still happily married. Miranda got a job at a new, more diverse and inclusive law firm. Charlotte was in total mommy mode. And Carrie reunited with Big (after a brief almost-fling with Aidan in Abu Dhabi) and they reaffirmed their commitment.

So, what will the new chapter explore? In 2018, Parker told The Hollywood Reporter that Carrie might write about the #MeToo movement. "It's hard to imagine her not wanting to write about it, not wanting to talk about it and not having an opinion," she said. "It would be rich territory for her to explore."

And of course, whatever the stories may be, fans can expect the fabulous and often outrageous fashions that the original Sex and the City was famous for.

This article was written by Kelly Woo from Tom's Guide and was legally licensed through the Industry Dive publisher network. Please direct all licensing questions to legal@industrydive.com.