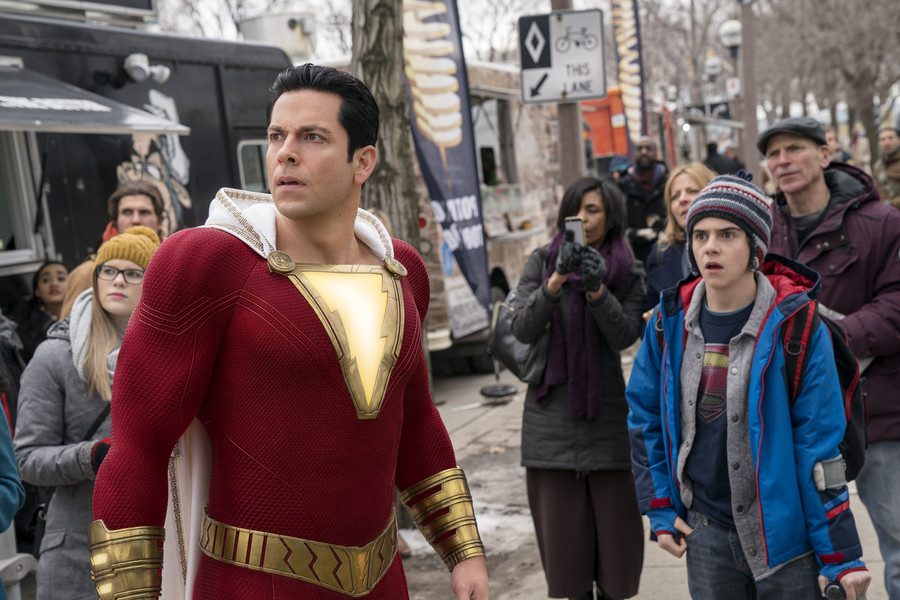 He missed it by that much! In the new trailer for "Shazam!" Zachary Levi tests out some of his classic superhero abilities, like being able to leap tall buildings in a single bound.

He can jump! But maybe not that high. Ouch.

The long-awaited second trailer for "Shazam!" gives a fuller sense of this quirky DC Comics origin story, with a 14-year-old boy (Asher Angel) acquiring superpowers from an ancient wizard (Djimon Hounsou) to transform into the adult superhero Shazam (Zachary Levi). Here's more of the official logline:

Still a kid at heart — inside a ripped, godlike body — Shazam revels in this adult version of himself by doing what any teen would do with superpowers: have fun with them!  Can he fly? Does he have X-ray vision? Can he shoot lightning out of his hands?  Can he skip his social studies test?  Shazam sets out to test the limits of his abilities with the joyful recklessness of a child.  But he'll need to master these powers quickly in order to fight the deadly forces of evil controlled by Dr. Thaddeus Sivana (Mark Strong).

We also got a longer look at Strong's villain in this latest trailer and how the growing pains of Shazam's powers create some bigger problems.

"You electrocuted a bus and then almost killed those people," Shazam's teenage friend says. "And then I caught it!!"

"Shazam!" opens April 5 in theaters and on IMAX.

'Shazam!' Trailer: Zachary Levi Leaps Tall Buildings in a Single Bound – Almost (Video)Watch the new trailer for the film above.

'Shazam!': Billy Enjoys the Perks of Being a Superhero in New TV Spot (Video)

'Shazam!' Star Zachary Levi on Whether Black Adam or Shazam Would Win in a Fight (Exclusive Video)

This article was written by Brian Welk from The Wrap and was legally licensed through the NewsCred publisher network. Please direct all licensing questions to legal@newscred.com.