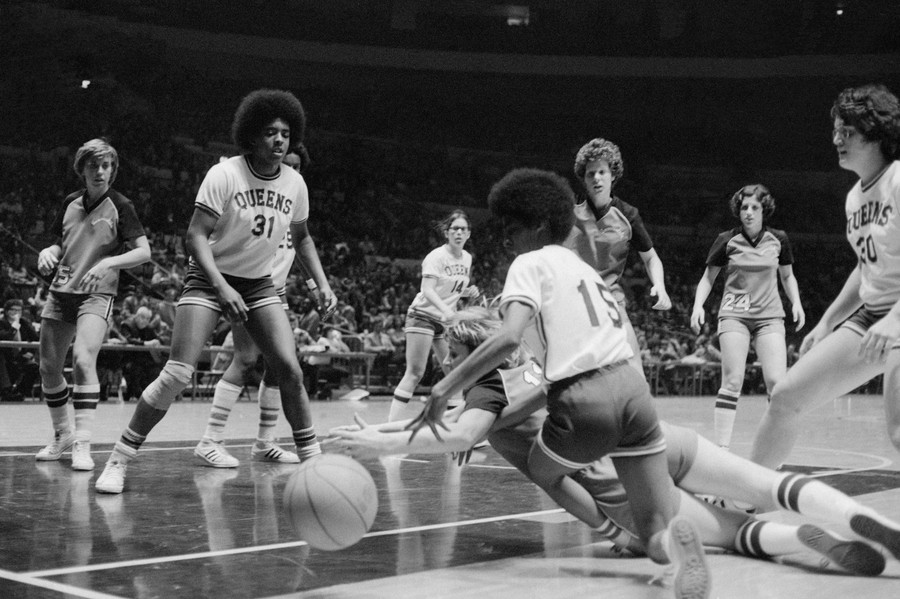 With March marking both March Madness and Women’s History Month, it’s a fitting time to look back at how far women’s sports have come since President Richard Nixon signed Title IX into law on June 23, 1972, as part of the Education Amendments of 1972.

But, though many know Title IX best as the law that increased women’s participation in school sports, that result was in some ways a happy accident.

“Sports wasn’t really discussed or considered much at all when Congress was considering the Title IX bill or when it enacted the law,” says Margaret Dunkle, who as a researcher in the 1970s helped bring that result to fruition.

For the work she did, which led to her becoming the first Chair of the National Coalition for Women and Girls in Education, Dunkle is now one of the trailblazers honored by the National Women’s History Project for exemplifying this year’s Women’s History Month theme of “Nevertheless, She Persisted.” She became Associate Director of the Association of American Colleges’ Project on the Status and Education of Women on the strength of her contributions to a book on sex discrimination in the workplace, but she’d also been drawn to athletics as a civil rights issue. So it was in her role with the project that she helped put together a groundbreaking 1974 report on the state of women’s and men’s sports at U.S. colleges and universities.

That report was part of the work that had to be done in order to put Title IX into action.

Patterned after the Civil Rights Act of 1964, which had prohibited discrimination on the basis of race, the main provision of Title IX was only 37 words long: “No person in the United States shall, on the basis of sex, be excluded from participation in, be denied the benefits of, or be subjected to discrimination under any education program or activity receiving Federal financial assistance.”

Before it could go into effect, the Executive Branch — specifically the Department of Health, Education, and Welfare‘s Office for Civil Rights — had to write detailed regulations outlining just what schools and colleges could and couldn’t do, in light of the new statutory requirement. And where would they start? Much of the initial focus was on schools that had quotas for female students or that required female applicants to have higher grades to gain admission, but the impact of gender on education was pervasive. One popular career-aptitude test given to students even came in blue versions for boys and pink versions for girls.

Hence, the fact-finding mission: if researchers could figure out what was wrong with the system, they might be able to figure out how to fix it. And sure enough, the discrimination observed by Dunkle and her fellow researchers provides a surprising glimpse at what schools got away with.

For example, some universities provided team doctors and insurance for the men’s teams, not the women’s teams. One female athlete said she wasn’t allowed to get her knee injury checked out with an ultrasonic machine that doctors used to treat male athletes. The women’s varsity basketball team at one school, which had once been a women’s college, could use the gym “only when the men’s teams didn’t want to use it.”

Differences in funding were clearly at the root of many of the problems. It was common for the men’s teams to get budgets for travel on chartered buses, while the women’s teams had to hold bake sales, sell candy bars or Christmas trees, and seek donations in order to fund their travel and uniforms. At one big state school, with a 50% female student body, only $5,000 of the $68,000 in student fees that was allocated for athletes went to women’s teams. In perhaps the most dramatic case of inequity that Dunkle found, one Midwestern university put more than $2.6 million a year into men’s athletics, while the women’s teams got no money at all.

But that didn’t mean women didn’t want to play.

“Given encouragement and ample opportunity, female students become interested in athletic programs,” the report said. “They practice seriously and strenuously. Given ample support and publicity, women’s sports can create as much spectator interest as men’s sports.”

For proof, the report argued, colleges and universities could look at the success of girls’ high-school basketball games in Iowa. “Everybody comes to see the girls play and then leaves when the boys come on,” one girl told Sports Illustrated for a 1969 feature on the girls’ teams dominating a state high school basketball tournament in Des Moines. “Many of the girls, born into farm families, grow up well conditioned for the game’s physical demands,” the article observed. “They learn to detassel corn and walk beans as soon as they can tie their sneakers, and just as early they are shooting at the homemade baskets they have rigged on barns and in backyards of rural towns.”

That’s why, as the final line of the report concluded, “Equity demands that women be given a ‘sporting chance.'”

Today, female athletes may have become more visible, but that doesn’t mean the issues have gone away. By age 14, girls drop out of sports at two times the rate that boys do — and factors such as lack of access to sports for underserved populations continue to be a problem. And while the gender imbalance in undergraduate and graduate education has also shrunk overall, not only in the realm of athletics, Dunkle sees plenty of evidence that the balance still needs tending. Ongoing discussion about the best ways to encourage women to pursue careers in the sciences and math, for example, is proof to her that the fields aren’t ready to go without those conversations.

“The fact that that those supportive activities are still needed have demonstrated the problems of inequity have not disappeared,” as Dunkle she it.

The implementation guidance for schools, to which her report contributed, became law in July 1975. And these days, equality in sports is not the only well-known impact of Title IX. As rape and sexual harassment allegations become more openly discussed on campuses, schools can be held responsible in court for violating Title IX if they’re found to have known about and ignored pervasive sexual harassment and assault, as the Supreme Court ruled in a 1999 decision.

In retrospect, Dunkle says, she probably saw those issues during her research, too.

“There were so many issues that were more blatantly more obvious, more provable,” Dunkle said when asked whether she saw sexual harassment back when she was doing Title IX-related research. “If you’re excluding all women from medical or law school, you don’t perceive [harassment] as an issue because women weren’t there. As women became more integrated through the professions, those issues have become much clearer. And we will probably discover more issues.”

This article was written by Olivia B. Waxman from TIME and was legally licensed through the NewsCred publisher network. Please direct all licensing questions to legal@newscred.com.