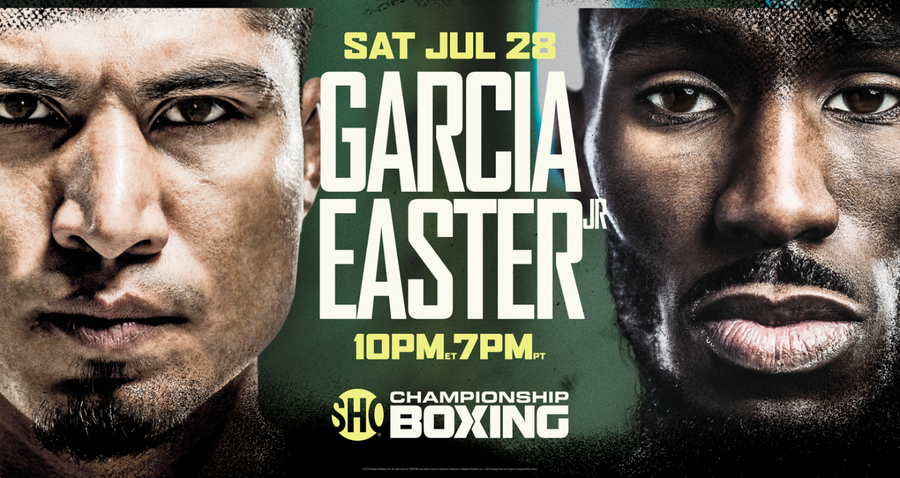 On Saturday SHOWTIME Championship Boxing will air another highly anticipated title bout, this time between lightweight strap holders Mikey Garcia (38-0, 30 KOs) and Robert Easter, Jr. (21-0, 14 KOs). Easter (21-0) holds the IBF lightweight title and is ranked 3rd in the division by Ring Magazine. Undefeated Mikey Garcia (38-0) is the WBC Lightweight titleholder and rated second in the division behind the formidable force known as Vasiliy Lomachenko. This fight could be the first step toward unifying the four belts in one of boxing’s most competitive divisions.

Distinctions with a Difference

The fighters offer a stunning set of contrasts, first glimpsed when they stood toe-to-toe at their early July press conference. The 5’11" Easter towered over the 5’7" Garcia. In the face off, Garcia appeared nonplussed by the taller man’s advantage. He has noted that the last time he fought in Staples Center he dispatched the tall Rafael Guzman with considerable ease. But Guzman was not then a reigning champion with a strap on his shoulder and a string of impressive victories under his wing.

Easter also owns an eight-inch reach advantage over the smaller Garcia. Garcia seems to question whether it truly is an advantage, however, saying he could slip within Easter’s long arms when they are extended to punish the wide-open body of the IBF champ. In his tough victory over Javier Fortuna, Easter was able to use his length against a hard-punching smaller man like Garcia. But he also showed vulnerability, as Fortuna was able to land solid punches on Easter throughout the fight. At fight’s end, Fortuna still looked spry and the more energized of the two. Easter nipped out a close split decision to retain his belt. Garcia’s camp has no doubt studied the film of that fight for clues how to evade Easter’s stinging jab and bring the taller boxer’s head down with body blows.

For his part, Easter has talked enthusiastically about studying film and developing his craft in his preparations for the fight. In contrast to the fully formed Garcia, Easter is a man still growing into his craft. At just 27 years of age, the Toledo native will be an underdog on Saturday night, having fought only 21 times compared to Garcia’s 38 bouts. This is not to undersell Easter’s talent, merely to note that Easter is simply the more unverified talent, still in need of some resume-building wins against elite fighters. His chance will come Saturday as he meets a four-division champion who just won a belt in a higher weight class.

Garcia’s punching power is considerable at any weight, but especially so at lightweight, where he has recorded most of his 30 knockouts. Most recently, he pummeled Elio Rojas, dropped Dejan Zlaticanin, moved up to dominate Adrien Broner and then punish Sergey Lipinets to capture the IBF Junior Welterweight belt. He will most certainly test Easter’s chin, but Easter has shown the capacity to drop talented fighters. He was impressive finishing off Algenis Mendez before capturing the belt against Richard Commey, flattening Luis Cruz and scoring the hard-fought decision against Fortuna.

In other words, this is not one to be missed. Although there has been little animosity between the fighters, we have not yet seen the final press conference or the weigh-in. Easter recently made a passing remark about this being an “easy win” for him, perhaps echoing the confident lines of his friend and mentor Adrien Broner, a man that Garcia beat just last year. Garcia smirked away Easter’s remarks, not interested in engaging in a battle of words before the war in the ring.

Easter may have some bulletin board material from the Garcia camp as well. He might wonder if Mikey Garcia is looking past the young Easter. At 30, he is as ambitious as ever, particularly considering his two-year layoff from the sport. He has spoken about unifying lightweight belts and cementing his legacy with a victory over the undefeated Easter. But when asked, he conceded that, should he defeat Easter, he might be more interested in again bumping up a weight class to face welterweight up-and-comer Errol Spence. Garcia’s older brother and trainer Robert Garcia—one of the best in the business—felt differently, suggesting that he felt Mikey’s best weight was 135 and that he ought to first try to unify the lightweight division before risking another jump in weight. The younger Garcia won the IBF Junior Welterweight belt against Sergey Lipinets earlier this year in his first serious test at 140. Fighting Spence, who recently demolished undefeated Mexican Carlos Ocampo with a first round liver shot, would likely require Garcia to rise to 147.

Easter will surely savor this stray speculation from the Garcia camp, using it as fuel and a sign of disrespect. From every angle, Saturday looks to be a barnburner, a particularly pleasing sight in a sport rife with carnivalesque showmen like Tyson Fury, and opponents that can’t seem to make a fight despite the clamor of diehard fans—Anthony Joshua seems intent on postponing a showdown with Deontay Wilder to unify the heavyweight belts.

Which brings us to the undercard. Wilder barely survived a brutal exhibition with Luis Ortiz (28-1, 24 KO), defeating him with a 10th round TKO, but only after Ortiz had repeatedly rocked the champ, once leaving him staggering about the ring clutching at Ortiz in a desperate bid to outlast the round. Alas, Ortiz lost, but gained a sure measure of respect from his heavyweight peers in the process. The Cuban is the top undercard fight on Saturday, fighting Razvan Cojanu (16-3, 9 KO) in a bid to get back in the running for the heavyweight title.

Also on the undercard are junior welterweights Mario Barrios (21-0, 13 KO) and Jose Roman (24-2-1, 16 KO). Barrios has won several consecutive stoppages since moving to 140 from 130, while the 30-year old Roman hopes to capitalize on a hometown crowd at Staples Center.