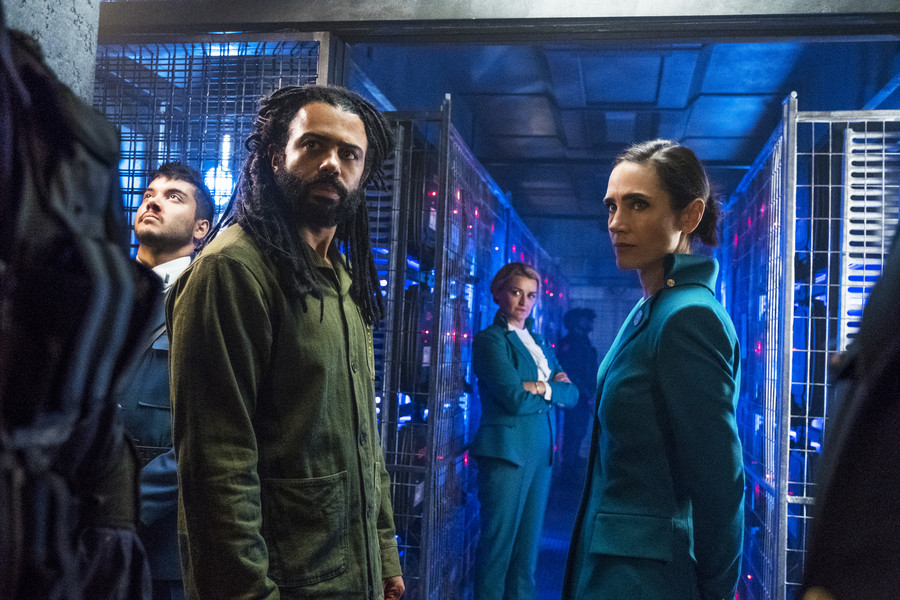 Filmmaker Bong Joon-ho has had a big year. His 2019 dark comedy thriller "Parasite" was nominated for over 300 awards, winning almost 200 of them, including Oscars for Best Original Screenplay, Best Director, and Best Picture. And if you are a fan of his work, there's a new TV series debuting in May that will be right up your alley.

"Snowpiercer" was Bong's English-language debut. It premiered in 2014 and starred Chris Evans, Tilda Swinton, Jamie Bell, Song Kang-ho, Octavia Spencer, John Hurt, Ed Harris, and Ko Ah-sung as some of the last remnants of humankind who have taken refuge on a massive high-speed train that constantly circles the globe and has saved hundreds of people from the climate change apocalypse happening outside.

The film, based on a graphic novel of the same name, has earned almost $90 million worldwide and has a 94 percent fresh rating on Rotten Tomatoes. Grantland's Wesley Morris wrote of the movie, "It's a downbeat spectacle. But very good, unforgettably bizarre, original filmmaking and adventurously explored ideas can leave you feeling high, especially when you don't know quite how it's been pulled off."

So, if you liked "Snowpiercer" the film, you'll want to tune in to the upcoming TV series on TNT because it looks to be a wild ride in the same vein as the film, showcasing a caste system of haves and have nots that threatens to boil over at any moment.

The show stars Daveed Diggs as Layton, a role similar to who Evans played in the film — the leader of a revolution by the disenfranchised tail section. Jennifer Connelly steps into Swinton's shoes as the right-hand woman to the train's creator, Mr. Wilford. The two of them are on a collision course after a homicide on board sends Layton into the upper-class cars because of his former work as a police detective.

The homicide is just one of the mysteries at the heart of the show — no spoilers, but there is more than meets the eye with many of the central characters. Furthermore, there is a revolution brewing because the "tailies" have grown tired of living in abject poverty while the first-class passengers dine on food grown in the greenhouse cars or harvested from the aquarium. While we can't promise any monologues about cannibalism from Diggs, we can promise a pointed social commentary about income inequality and basic human rights set against the backdrop of not being able to escape your aggressors.

It's not hard to see the parallels with today's world as income distribution grows ever-more out of balance, plus there's a certain irony in these people hurtling relentlessly forward around the globe while actually going nowhere. The cruelty and brutality of the confined space work in tight juxtaposition with the lavishness of some of the rail cars and the show may act as a thrilling escape for those at home who may identify with those trapped on Snowpiercer.

Finally, the series has already been renewed for a second season. Several recurring characters in season one will be upped to series regulars, plus "Game of Thrones" alum Sean Bean joins the cast in a top-secret role. That illustrates part of the brilliance of a TV show about a 1000-car train — the cast of characters and stage on which to put them is only limited by the imaginations of the show's creators, which means "Snowpiercer" could run for season upon season, each populated by new characters and different points of contention.

Just as the film was full of jaw-dropping surprises, the show promises to keep the action coming as fast and as furious as the train itself. Their shared dystopian landscapes make for disturbingly satisfying twists and turns — plus, the show has a few tricks up its sleeve for even the most diehard fans of the Bong film and/or the graphic novel on which both are based.

So mark your calendar for Sunday, May 17 at 9 p.m. ET/PT on TNT when the "Snowpiercer" train is leaving the station — you'd do well to get on board.