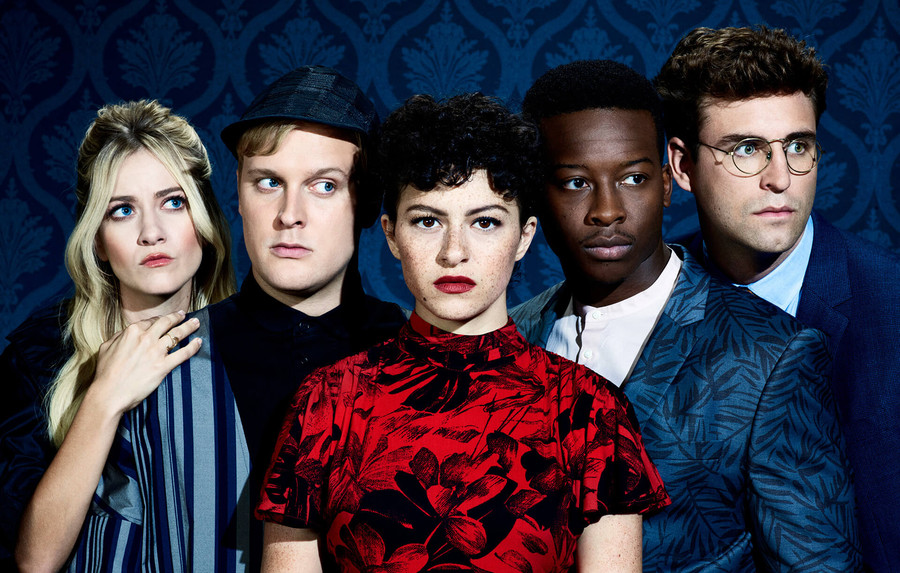 What makes a show quirky? If you have to ask, you'll never know. Quirky television, while not easily defined, has been with us since the beginning - when it debuted, I Love Lucy featured characters that were so offbeat and situations so new and innovative that it would have been called quirky at the very least. But the last decade or two have spawned a whole new crop of funky shows with a particularly modern sensibility that often share a fusion of humor, pathos, and social commentary.

Some creators have become auteurs of quirk, responsible for creating several of the shows that have come to epitomize what we’re calling Quirky TV—often including elements of fantasy, camp, and highly stylized production design. Others make shows less fanciful, but nonetheless share enough commonalities to earn the Quirky title. Living in the Golden Era of Television, there is finally room for everyone to let their freak (or, I guess, quirk) flag fly.

So, whatever your pleasure, we’ve assembled a few of our recommended favorites (there are so many more we could mention); some new and some from years past worthy of a binge…

1) Wonderfalls – FOX (sadly only on DVD - available on Amazon)

Bryan Fuller’s 2004, gone-too-soon, comedy-drama-fantasy was set in an exotic and seemingly remote version of Niagara Falls, where our heroine, an overqualified recent Ivy League grad Jaye, works in a gift shop. When souvenir figurines start coming to life and speaking to her, potentially as the voice of God, Jaye’s odd little world takes on new meaning and mystery. The show’s metaphor—blatantly referenced in the show’s theme song as well as discussed throughout the series—of “bobbing along in a barrel” destined to go over the falls, perfectly encapsulates the cute-dark tone of the show.

And, yes, we were tempted to include Fuller's later series Pushing Daisies, which shared this sensibility, but we consider it an outrage that Wonderfalls doesn't get the universal love it deserves. This hidden gem, which boasts a crack ensemble cast including French-Canadian actress Caroline Dhavernas, Katie Finneran, Lee Pace, Tracie Thoms, and more, never found the audience it deserved and was cancelled after 13 episodes. It’s worth a binge that’s guaranteed to leave you wanting more. Join the club.

Though technically set in a particular Northwest enclave, Portlandia’s unique comedic voice extends far beyond any one location or subculture, tapping into a universal language that pokes fun at extremes of all stripes. What started out as quirky sketch comedy grew into a fully formed world complete with characters we watched stretch and grow through its recent eighth and final season, thanks to the offbeat humor of creator/stars Fred Armisen and Carrie Brownstein and their obvious affection for the world they created.

From the first notes of “The Dream of the 90’s”, Portlandia established a particular tone that’s undeniably smart and unique, particularly for a format that’s somewhere between scripted comedy series and sketch. This format allowed its creator/stars to maintain the show’s relevance and poke fun at a new crop of trends each season, at once a love letter and social commentary.

Search Party is a dark and satirical whodunnit, starring Alia Shawkat as Dory, the disaffected—but well-meaning— millennial. The show is notable both for its wry comedy and its sharp take on the (real and exaggerated) self-absorption and rudderless ambivalence of Brooklyn-dwelling 20-somethings as Dory and her friends try—sort of—to track down their missing—sort of—friend Chantal in Season One, and then cover their tracks after the search leads to dark ends in Season Two.

Search Party is undeniably weird and simultaneously earnest and smart and worthy of a journey down the rabbit hole. It's a weird one, but that's what we're here for, right?

The newest addition to our list is the handiwork of creators Alan Yang (Master of None) and Matt Hubbard (30 Rock, Parks and Recreation). Forever is incredibly hard to pin down, and flips the script on where you think it’s headed multiple times. Seriously, there was a press embargo that prohibited us from discussing the plot before the show premiered. What begins as a commentary on marital boredom turns unexpectedly into an afterlife fantasy, switches back to an exploration on purpose, and ultimately to…truth be told, we haven’t finished the season yet, so we’ll all just have to find out together.

The always fascinating and funny-even-when-serious Fred Armisen and Maya Rudolph (both of Saturday Night Live and beyond) anchor this study on human existence, which takes its time to unfold and swings from goofball to dark to moving in the course of a 30-minute episode. Quirks galore!

We hoped you enjoyed Some Like It: Quirky. Check back next week for a brand new run down for a whole new feeling.