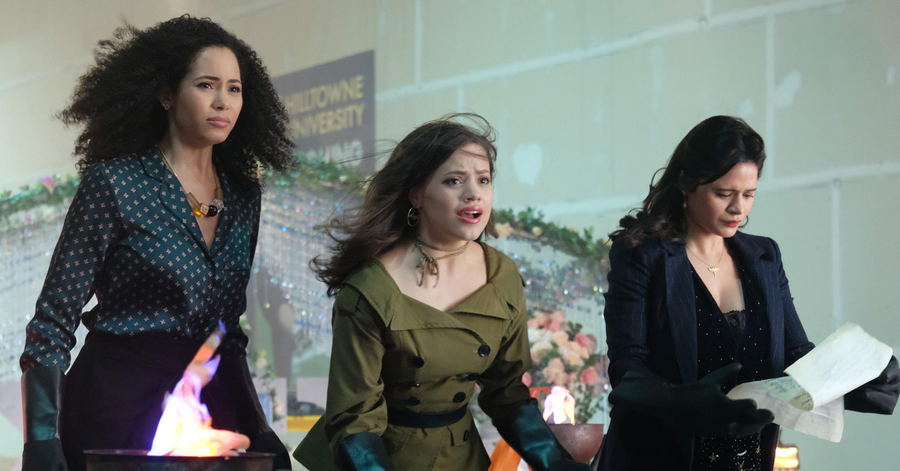 Magic is in the air! Fantastic Beasts: The Crimes of Grindelwald hitting theaters today has got us feeling every witch way and we want to run down some of our favorite magical shows. We loved magic as kids when our imaginations ran wild but we also appreciate it as adults - in a way, it is the ultimate escapism. Watching these shows we can't help but imagine how great our lives would be if we could harness the powers of the elements or some ancient Goddess to fix our problems. Yes, over a decade later, we are still waiting for our Hogwarts letter (any day now!). So if you want to daydream about magic like we do, here are some of our favorites to get lost in.

We'd be remiss to pass over the O.G. TV witch: Mrs. Samantha Stephens. While the sitcom feels distinctly 60's in its execution, the story of a witch in love with a mortal and trying to lead as normal a life as possible will never grow old. Samantha is actually an early example of a powerful woman who enjoys a domestic life and has much more dimension than many of her TV housewife contemporaries. Add in her badass mother Endora and you've got a true winner. Just don't be surprised if you spend hours in front of a mirror trying to wiggle your nose after a marathon.

Whether you prefer this rebooted version or the original, you can't go wrong with the power of three. The series originally aired in the late 90's and early 2000's, meaning its messages of girl power alined perfectly with the Spice Girls and a wave of female politicians taking office. Now, when we need it most, it has risen from the ashes with a distinct 2018 take on the subject of witches, complete with a more racially diverse cast, a spectrum of sexuality, and a pretty direct message about the Time's Up/Me Too movement. Oh, and magic of course. Wicca and witchcraft have always been associated with female empowerment and, for our money, no one illustrates the connection quite like the Charmed ones.

Ever-so-loosely based on the Arthurian legend of the Once and Future King, this show is high fantasy with a capital F. Following the days of teenaged Merlin and Prince Arthur (again, loosely based - basically inspired by - the legend), this show strikes a balance of light and campy and emotional drama that not many handle well. What starts as an 'adventure of the week' format evolves into a dark and more intense show as the seasons progress. And all the while, Merlin's magic is both a secret he must guard on penalty of death and the strongest tool he has to protect Arthur and the entire realm. It's a bromance for the ages with a medieval twist and we love it.

Let's approach this from another angle: what about real world magic? Tricks that make us say out loud "No way!" and "How does he do it?" In the lighthearted Magic for Humans, Justin Willman (of Cupcake Wars fame) combines his love of performing tricks and his genuine faith in humanity into a show that will leave you full of wonder. Having gone viral for the magical first dance at his wedding, Willman is in full force as both a stand-up comedian and an illusionist here.  It's the kind of show that is sure to put a smile on your face and make you believe again.

We hope you enjoyed Some Like It: Spellbinding. We'll be taking a week off to shop Black Friday deals but check back in December for a brand new run down for a whole new feeling.