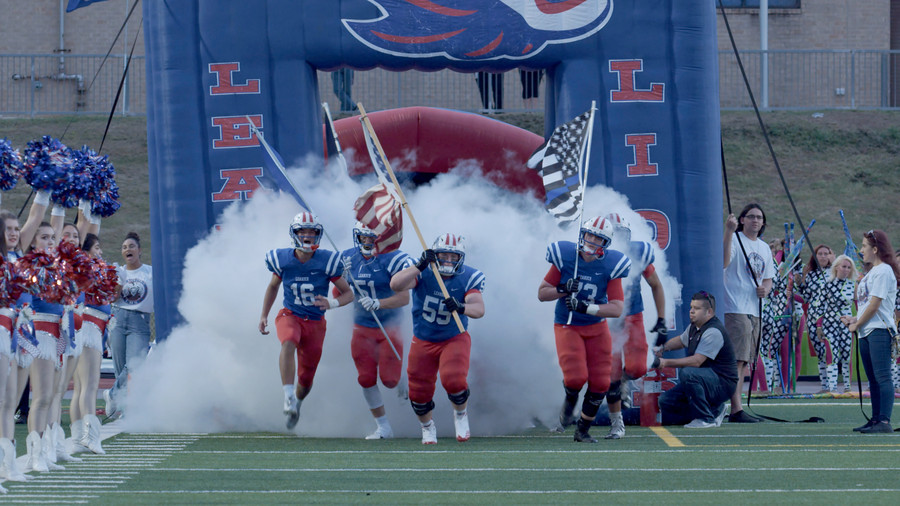 SHOWTIME® isn't just for engrossing, critically-acclaimed dramas and hilarious comedy specials. It has distinguished itself as the premium destination for sports documentary films and series that explore contemporary subjects and diverse themes at the intersection of sports and culture. And for sports fans, there's no better destination than SHOWTIME for sports documentaries that cover a wide variety of sports, events, and athletes.

Here is a guide to some of the best sports docs currently available.

What it's about: The story of Texas high school football star Greg Kelley, who was convicted of the super aggravated sexual assault of a four-year-old boy in 2013 and sentenced to 25 years in state prison. He always maintained his innocence and "Outcry" follows his quest for truth and justice over a seven-year journey through the appeal process.

Why it's a must-watch: This five-part investigative documentary is gripping as it raises the question, is Kelley guilty or innocent – and if he is innocent, who was the guilty party?

What critics are saying: TIME calls it "timely and haunting," and the Wall Street Journal calls it "an immensely moving piece of history."

Basketball County: In the Water

Why it's a must-watch: In 20 years, Prince George's County has produced 25 NBA players, a dozen WNBA players, and countless other college basketball stars. It features archival footage of Durant as a boy playing AAU ball, and a young Lew Alcindor (who would go on to be known as Kareem Abdul-Jabbar); it also touches on the tragic stories of Len Bias and Curtis Malone.

What critics are saying: Esquire says that "Basketball County" is "more than worth the watch" as it "touches on about 10 different stories that could stand alone as hour-long documentaries.

What it's about: This Emmy-winning documentary examines the 2003 murder of Baylor basketball star Patrick Dennehy, who was shot and killed by his teammate Carlton Dotson during an argument.

Why it's a must-watch: Former Baylor head coach Dave Bliss is featured heavily. He resigned after the murder because he allegedly made illegal tuition payments for Dennehy and told the other players to make up a story about Dennehy being a drug dealer as a cover-up for the tuition payments. Bliss's assistant coach Abar Rouse recorded conversations about these allegations because Bliss has threatened to fire him if he didn't go along with the scheme.

What critics are saying: Christianity Today says that the "contrast in demeanor and credibility" between the interview subjects is "impossible to overstate" and Reason Online likened it to a "good whodunnit."

What it's about: New England Patriots wide receiver Julian Edelman suffered a knee injury in 2017 that almost derailed his career. This is a look at how he overcame his injury and his PED suspension to return to glory in the NFL.

Why it's a must-watch: Sidelined by his injury, Edelman returned to his dad's auto mechanic shop to pick up the pieces. It showcases their fraught, sometimes strained relationship, and demonstrates why he is one of the most likable players in pro football. It also features interviews with some big names: Mark Wahlberg, Snoop Dogg, Tom Brady, Deion Sanders, and Michael Strahan.

What critics are saying: Decider calls it "not your typical sports documentary" and said it is "slickly produced." Fans of Julian Edelman will love it.

What it's about: This award-winning documentary follows Ron Artest (aka Metta World Peace), one of the most controversial and misunderstood NBA players of all time.

Why it's a must-watch: The film follows the NBA star's upbringing that was fraught with drugs and violence, with intimate interviews from his friends, family, teammates, and rivals. Artest himself is not afraid to talk about the most troubling moments of his life, providing cutting insight into his battle with undiagnosed mental illness.

What critics are saying: That Shelf says the documentary "casts Artest and his career under a new light" because he is one of the first athletes to openly advocate for mental health awareness.

What it's about: This documentary follows two boxing prodigies as they try to get out of Chicago's South Side and make it big in the boxing world.

Why it's a must-watch: Kenneth Sims Jr. and Destyne Butler Jr. are the subjects of the documentary – and it doesn't just cover their rise to fame. The film follows them for nine years as they grow from young men into adults and fight to make names for themselves in boxing.

What critics are saying: The Hollywood Reporter calls it "an emotional gut-punch of a boxing documentary that follows what happens when the final bell rings, the crowd goes home and the gloves come off." On a similar note, One Room With a View writes that this "moving narrative paints an engrossing portrait of determination, grace, and ultimate triumph against all odds."

Shut Up and Dribble

What it's about: This three-part documentary takes a look at the increasingly large role athletes are playing in today's cultural and political environment.

Why it's a must-watch: The title is taken from conservative pundit Laura Ingraham telling NBA superstar Lebron James to "shut up and dribble" after some Golden State Warriors declined an invitation to the White House to celebrate their NBA championship. The film chronicles NBA stars bringing about social change and making powerful statements in the current political climate.

What critics are saying: NPR writes, "It's a strange idea, this expectation that players must entertain and not speak. ... 'Shut Up and Dribble' is a good exploration of all the ways that black athletes couldn't remain apart from racism or politics even if they wanted to — which, as it happens, many of them don't."