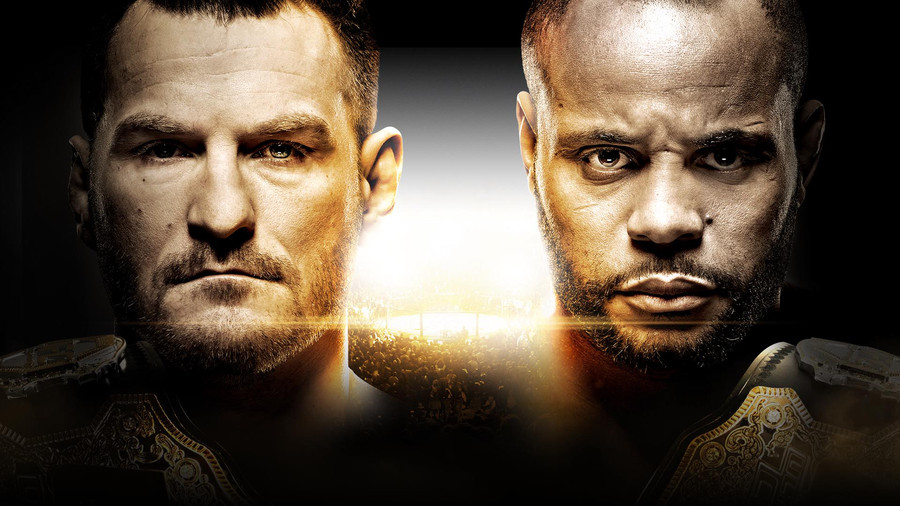 It's almost 2018 International Fight Week, which will bring all the best UFC fighters and champions to Las Vegas and PPV screens across the world. Two of UFC's biggest stars — light heavyweight champ Daniel Cormier (20-1) and heavyweight champ Stipe Miocic (18-2) — will headline UFC 226 on Saturday, July 7th. And there's more at stake than just the Heavyweight title; this showdown's about defining a legacy and making history.

Cormier, the 39-year-old living legend and jacked bowling ball of a man, is in pursuit of UFC immortality. Defeating Miocic, who should be second to LeBron James as the pride of Cleveland’s sports scene, would place him alongside Conor McGregor as the only fighters to simultaneously hold two divisional championship belts.

Cormier is embracing the opportunity to further polish his legacy, telling FloCombat in May, “I can honestly say I am one of the greatest mixed martial artists of all time and have no reservations about it and no one can question it."

There’s no hyperbole required to make Cormier’s case. He may be the greatest wrestler the UFC has ever seen, Brock Lesnar included. Cormier finished fourth at the 2004 Olympic Games, and he's translated his grappling skills to mixed martial arts for a key advantage in the Octagon.

Cormier was an undefeated 13-0 heavyweight early in his career and excels due to his sound wrestling, grappling and submission techniques. Defeating Miocic could be his career’s magnum opus. His only losses in the last decade have been to Jon Jones, and one was retroactively ruled a no-contest after Jones failed two U.S. Anti-Doping Agency tests. As he inches towards retirement, Cormier must find the specter of reclaiming his second title only after Jones was stripped of it a little haunting. This showdown is a fresh opportunity for Cormier to unseat an elite champion.

Tactically, this will be a battle of contrasting styles. Miocic, 35, has emerged as a heavyweight great who rules with an iron fist. Miocic is a former Division I wrestler and an actual firefighter whose Twitter bio self-describes as "The baddest man on the planet," but it’s his Golden Gloves background that has carried him to so many victories. He lands the third-most significant strikes per minute among heavyweights, and packed inside those strikes is a megaton of thermonuclear energy.

Miocic has ended nine fights in the first round, while 14 of his 18 wins have been knockouts or TKOs. Additionally, the champ's three consecutive Heavyweight title defenses has already been the most successful run in the division’s history; winning a fourth over Cormier would elevate him into a UFC legend.

Two years ago today I became champ. I’ve defended the belt three times since then and broke the record for most consecutive title defenses. There is no end in sight. I will never stop working for you! pic.twitter.com/S9f4m1Dj9h

Miocic typically weighs in at over 240 pounds, but Cormier’s size disadvantage in their showdown isn’t measured solely in pounds. Miocic boasts an 8-inch reach advantage over the 5-foot-11 Cormier and is a thunderous striker. It’s a significant kryptonite, and Cormier will need to use all the tricks up his sleeve to win. His most effective modus operandi is to utilize his low center of gravity and thick frame to absorb blows, get inside, and manifest ferocious takedowns. From there, Cormier the wrestler is an expert at finishing.

Few duos have entered a UFC cage for a fight that has so much riding on the outcome. Cormier’s title reign is considered a dubious honor by detractors who believe Jones rightfully earned it. A win for Cormier would quell those skeptics and catapult him into the highest echelon of iconic pound-for-pound fighters. Meanwhile, just five months ago, Miocic was considered the underdog against champion Francis Ngannou. A victorious Miocic would be exalted for his budding heavyweight division hegemony.

The stage has been set for a seismic altercation. Whether you’re a casual fan or rooting hard for one of the champions, UFC 226’s heavyweight title fight will shift the UFC’s tectonic plates more than any event in recent history.