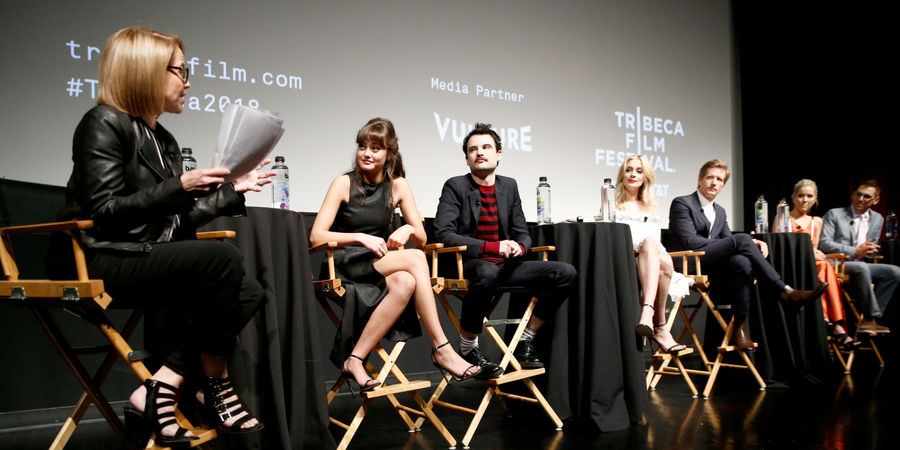 The Tribeca Film Festival gave me (and some other lucky New Yorkers) a first look at the tantalizing new series Sweetbitter. Based on the bestselling novel of the same name, STARZ's new drama premiered with a red carpet arrival for cast and creators and a post-screening panel moderated by Katie Couric.

It’s fitting a story so steeped in the culinary culture of New York City made its debut at Tribeca. In the show, twenty-two-year-old Tess moves to New York City to pursue a new life. When she interviews for, and lands, a position at one of the best restaurants in the city, she thinks all she’s found is a steady income. But, as she tastes expensive wine, explores dive bars, and learns who she can trust, Tess gets caught up in the chaotic, adrenalized world that lurks just beneath the restaurant’s glamour.

Creator, executive producer, and writer (of both the novel and show) Stephanie Danler based Sweetbitter on her own experiences working in the restaurant industry. However, on the panel, she’s quick to remind viewers this is fiction.

“All the experiences in this book are authentic and lived,” Danler says. “I’m proud that Sweetbitter is authentic, and I’m also proud that it’s made up.”

The first two episodes screened for the now-hungry Tribeca audiences are rich with sensuous oysters, beautifully seared steaks and bold red wines. You don’t just watch Sweetbitter, you can taste it. Line cooks chop, sauté and twirl around the show's kitchen in a mesmerizing ballet. Once the dining room empties and the restaurant closes, uniforms come off, liquor flows freely and the servers, bartenders, and staff party like rock stars.

For all the insider perspective Danler lends the series, the show is so much more than just the upstair-downstairs dynamic of the hard-working staff and the NYC bourgeoisie sipping expensive wines in the dining room.

“We didn’t want to make plot out of restaurant stuff," explains showrunner Stuart Zicherman. “We wanted to make it character stakes.”

At the center of it all is Tess, a young woman risking it all to start her life in New York City. You’ve seen other stories of a writer or actress trying to make it in New York, but what makes Tess so compelling is actually her lack of ambition. The cast and creators describe her as a “blank slate.” She doesn’t know what she wants to be.

“I think what attracted me to this is her being really unapologetically lost,” actress Ella Purnell tells the panel. “Being 21 is weird — I mean, being human is weird — but being 21 specifically.”

As Tess learns more about herself in the first two episodes, she’s also learning about her co-workers. Fans of the novel will be familiar with Simone (played with steely sophistication by Caitlin FitzGerald) and resident brooding bad boy Jake, portrayed appealingly by Tom Sturridge.

The ensemble introduces a variety of perspectives and experiences, allowing Sweetbitter to tackle sexual politics, substance abuse, and immigration through the lens of the restaurant staff.

Zicherman compared Sweetbitter to ABC’s Lost in how both shows unpack characters’ backstories as the characters work together. But that’s not the only thing the two shows have in common.

“I was Tess,” FitzGerald confesses to the audience. “I read the book, and it felt like reading my diary, only well-written and not so hungover and repetitive.”

Sweetbitter’s first season premieres May 6 on STARZ. Watch it with DIRECTV.