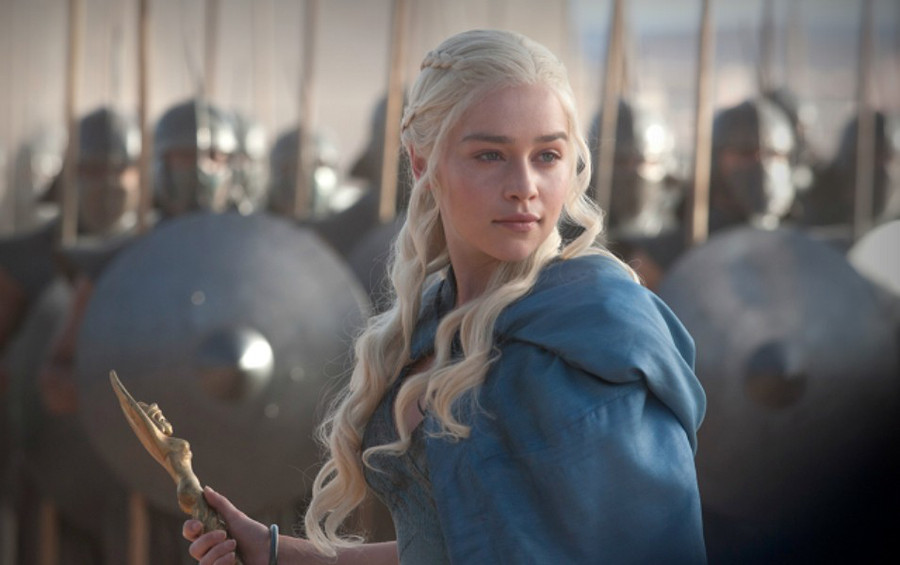 Symphony in G(OT): the Music of Game of Thrones

What’s the sweetest sound on television? If you’re reading this, it probably goes something like:

Game of Thrones’ killer soundtrack is as iconic as its killer dragons, killer direwolves, killer wights, killer treacherous riverlords, killer Dothraki horselords, and everything else about the show that just plain slays. And while the opening theme music sets off a Pavlovian response to rival one of Hot Pie’s baked goods, the rest of composer Ramin Djawadi’s soundtrack is just as invested in establishing the series’ immersive environment. Time to earn whatever chain link the Citadel gives out for music and dive into what gives Game of Thrones the most exciting soundtrack on television.

You know from the opening notes that you’re in for something epic. But why, exactly? The driving ¾ meter, propulsive string ostinatos, and expansive melody create a sense of scale that mirrors the on-screen flight over a map of Westeros. The solo cello—the show’s main musical character—has an austere beauty that feels period-appropriate for medieval fantasy. Then again, it might just be the drums.

While the theme is set in a minor key, the opening bars offer a brief dalliance to a parallel major key before slipping back as the melody begins. That musical glimmer of hope actually tells you a lot about the show: just when you think you’re safe, you’re back in the realm of betrayal, poison, and undead hordes. Speaking of which, the White Walkers get their own twisted, dissonant snippet of the main melody, as in the Season 2 finale. Given that they only speak in screams and howls, it follows that their musical language would be equally primal.

Djawadi designed the theme to be flexible, and indeed, it echoes throughout the series. You already know the main title version by heart, but check out this more tranquil version as the snow falls over King’s Landing in Season 7:

The Theme in the North

Despite all the punishment that’s been handed out to them, the Starks have survived as the heart of the show. And many of the show’s emotional high water marks have been set to their tunes. The main Stark leitmotif (a repeated musical phrase associated with a particular character, place, object, or group) is a solemn, string-driven melody that in places seems an inversion of the show’s main theme. Djawadi often uses it to cue the waterworks, as when Bran and Rickon abandon a burning Winterfell in Season 2. But it also appears triumphantly: remember how awesome it was when Robb was named King in the North?!

The theme also appeared when Jon Snow received the same title, but given that Jon’s always been the black sheep—er, white wolf—of the Stark family, it follows that his music would take its own twists and turns. He’s had a few themes over the years, but his music took a turn post-resurrection, becoming something with a hint of Stark, a hint of...something else...

Fire and Blood and Cello

Daenerys Targaryen has as many iconic moments as she has titles. So her music had better be worthy of the Mother of Dragons. As Djawadi tells Vulture, he hasn’t read George R.R. Martin’s books, and during the show’s early days had no idea just how powerful she would become. He started small with her theme, building it up over the first few episodes of the series until it becomes appropriately epic.

Dany’s theme sounds great played by a single instrument, usually a cello (surprise!), but as she asserts her power, her music takes on more instrumentation. Given that she spends the show’s first six seasons in Essos, Djawadi added sounds from our own Eastern hemisphere—Japanese and Indonesian drums, an Armenian reed instrument called the duduk—to lend an unplaceable quality to the music. Melodically, her theme can be described as “majorly minor,” mixing soaring, expansive intervals with altered minor scales and occasional sojourns to related major chords. The result is triumphant without being saccharine, a tribute to everything Dany’s had to power through over the course of the show. Listen to a reflective, understated version from the Season 7 soundtrack (and catch Dany's alternate "dragon" motif at the beginning of the track):

If you want to get really pumped up, there's another branch of the Targaryen musical tree: Dany's "Dracarys" motif. It first appeared when Daenerys pulled the ol' switcheroo on Kraznys mo Nakloz, revealing that yes, she does speak High Valyrian. Obviously. (At the Season 8 premiere, Emilia Clarke told us this was her favorite scene in the whole series.)

While Daenerys doesn’t generally take kindly to competition, her theme definitely plays well with others. The Season 6 finale mixes the Targaryen and Greyjoy motifs as Ironborn ships ferry the Targaryen army to Westeros. In fact, Dany’s theme, the Stark theme, and the main theme are all in the same key (C minor), so they blend especially well together. And even in Jon and Dany's past relationships (Khal Drogo and Ygritte, respectively), their music shares melodic and harmonic characteristics. It’s almost as if there’s a musical underpinning that reinforces the show’s two main character arcs. A “Song of Ice and Fire,” if you will.

What Is Played May Never Die

A hard place breeds hard men—and hard music. House Greyjoy’s music runs the gamut from solemn but soaring sea voyages to broken psyches, with vaguely Celtic and Scottish-inspired strings. Their most prominent musical moment occurs in the Season 2 episode, “The Old Gods and the New.” As Theon Greyjoy seizes his former home of Winterfell, “The Iron Price”—itself a twisted version of the main Greyjoy theme, “What Is Dead May Never Die”—plays during his botched beheading of Stark castellan Ser Rodrik Cassel. The dissonant strings underscore the moment Theon truly abandons what had become his real family in favor of an Ironborn heritage he never really knew. Meanwhile, Euron Greyjoy, the Wacky Uncle of Pyke, has his own theme, “I Am The Storm,” which mixes Greyjoy leitmotifs with his signature pirate swagger.

You don’t need a music theory degree to notice a theme here: most of the show's music is set in minor keys. It makes sense: Westeros is a tough place to live! Even the uproarious “The Bear and the Maiden Fair” is basically minor! That’s what makes the themes associated with Braavos so intriguing. Here, Djawadi pulls out all sorts of tricks, mashing major and minor scales together, bending notes up or down unexpectedly, and pulling in harmonies commonly associated with music from Eastern Europe to India. The result takes us to a place where a girl is no one and a man can change his face as easily as another changes his clothes. Its earliest proper appearance is when Arya Stark begins her dancing lessons with Syrio Forel, but it follows Arya wherever she meets a Braavosi: with Jaqen H'ghar at Harrenhal, then again at the House of Black and White. Here's the Season 6 iteration, "Needle," featuring an appearance by the Renaissance faire favorite hammered dulcimer:

Leitmotifs aren’t just for people—and besides, the Iron Throne is the longest surviving character on the show, in a way. Dating way back to the show’s pilot episode, the Throne as an institution has had its own theme music. A stately, regal, and borderline pompous version accompanies King Robert's arrival at Winterfell, while Joffrey received a far more menacing rendition in Season 2. The royal motif re-appeared in the Season 8 opener as Jon, Dany and the greatest army the world has ever seen made their way to Winterfell.

The Rains of Castamere

Best known as the musical cue for the Freys to begin their slaughter at the Red Wedding, this Lannister anthem had long been a part of the show’s soundtrack. The lyrics come directly from Martin’s books, and Djawadi put them to music well before the song became the backdrop to the scene that spawned endless reaction videos. Tyrion whistles it as he struts into the Small Council chamber, Bronn sings it in Season 2 during the leadup to the Battle of Blackwater Bay, and Cersei alludes to it as she threatens Margaery in Season 3. Its musical buildup over two seasons helped establish a sense of foreboding during Edmure Tully’s wedding.

One of the show’s few compositions with lyrics, “Rains” has an appropriately sinister back story: A Lannister vassal, Roger Reyne, rose in rebellion against his liege lord, refusing to pay back a loan. You know about Lannisters and debts…A young Tywin Lannister sealed the Reynes in their stronghold of Castamere and slaughtered them all. And now the rains weep o’er his halls, with not a soul to hear.

The bards wrote a song about the massacre, and it became a musical reminder to all of Westeros of what the Lannisters do to their enemies. In the show’s orchestral score, the tune forms the basis of the house’s leitmotif, appearing basically whenever a Lannister’s gonna Lannister. Compositionally, it’s rooted in late medieval/early Renaissance trends (aeolian modal harmonies, for you music theory nerds), and wouldn’t have been out of place at the taverns, inns, and even courts of 15th century Europe.

Light of the Seven

For the most part, Djawadi aims to use medieval-adjacent instruments when scoring Game of Thrones: strings, drums, choir. That’s why the piano (and later, organ) in this 10-minute opener to the Season 6 finale is so striking. “...it needed to be a new piece of music,” he told The Hollywood Reporter. “Any kind of character theme could tip it, and we didn't want to tip the audience."

At its core, "Light of the Seven" is a simple set of arpeggios, branching out from two repeated minor chords, teetering occasionally into hopefulness, but always sliding back to menacing suspense. It expertly builds tension, often using silence as its greatest instrument. By the time the churning strings come in as Lancel Lannister wanders into the tunnels below the Red Keep, we agree with Margaery Tyrell: There’s something wrong. In Season 7, "Light of the Seven" takes on new significance as an alternate theme for Cersei Lannister.

What will the show’s final season hold musically? The man who sees Game of Thrones before just about anyone isn’t talking. Djawadi didn’t reveal much in a recent interview with Mashable, beyond the cryptic promise of a few all-new themes and an overall declaration that it will be “sensational and epic and amazing.” Seeing as he’s partly responsible, let’s take his word for it.

The final season of Game of Thrones airs Sunday nights on HBO via DIRECTV.