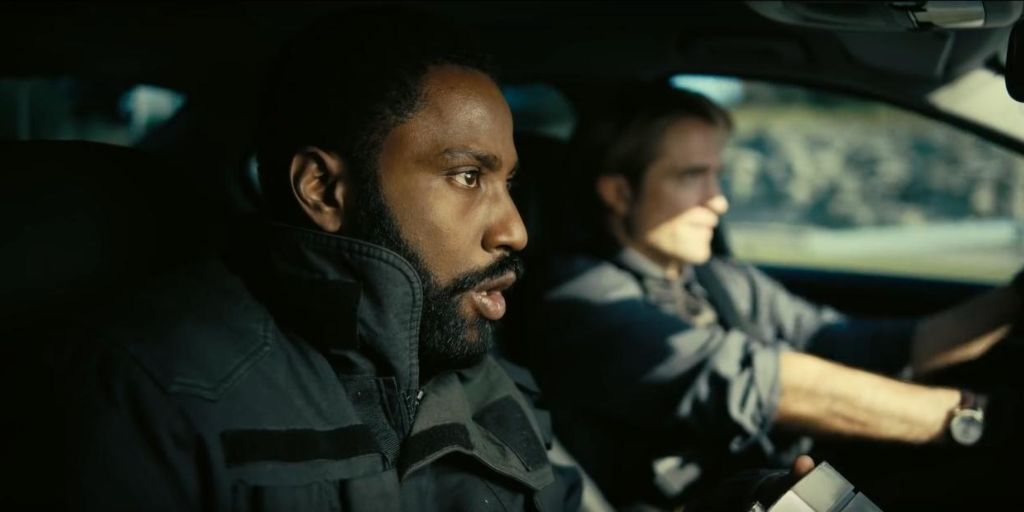 As noted a few days ago, James Cameron’s Avatar was the last original live-action flick to earn more than $825 million worldwide, in fact earning a lot more than that ($2.789 billion) 10 years ago. And as noted a few days ago, we really didn’t have a clue what to expect from Avatar until that first trailer dropped in August 2009, just four months before its release date. Warner Bros. isn’t being that coy with Tenet, as this trailer (along with the IMAX-exclusive prologue attached to Star Wars: The Rise of Skywalker) will spill some of the beans seven months out.

That was the case with Nolan’s Dark Knight sequels (following cryptic teasers in July) back in the day, along with (relatively speaking) Dunkirk and Inception in advance of their mid-July release dates. That jaw-dropping first teaser trailer to The Dark Knight that knocked us on our butts back in the day … that was 12 years ago. So while Tenet isn’t as shrouded in mystery as Avatar, it was able to mostly hold back any concrete plot details until this first trailer, which itself is impressive.

Since Avatar, we’ve seen IP, existing franchises and marquee characters come to dominate over movie stars and high concepts. There are just three wholly original Hollywood flicks (not counting the $500-$700-million likes of, be they original or adaptations, China’s The Mermaid, The Wandering Earth and Ne Zha) that have earned even $500 million worldwide between 2010 and 2019.

One of them was Alfonso Cuarón’s Gravity (my favorite movie of the decade, give or take Mad Max: Fury Road), which won him a Best Director Oscar and earned $724 million worldwide in late 2013. Ironically/fittingly, his next movie, Roma, ended up on Netflix (and won him another Best Director Oscar). The other two are Interstellar ($678 million in 2014) and Inception ($823 million in 2010), both of which came from Chris Nolan.

As such, it’s a big deal that we’re getting another big-budget, shrouded-in-secrecy, original genre flick (allegedly a time-travel spy movie) from the guy who also directed The Prestige (my personal pick for his best movie, natch), two blockbuster Dark Knight movies and Dunkirk. The latter, set during a mass troop evacuation during the Battle of France, earned $527 million on a $100 million budget in summer 2017. We can debate whether it counts as “original,” but it remains the biggest-grossing World War II movie ever in unadjusted global earnings.

While originality can still thrive on a budget, especially in high-concept horror (Get Out, A Quiet Place, etc.) or live-action musicals (La La Land), the kind of filmmaking that Tenet represents is very much an endangered species. As much as I’m inclined to blame the audience, part of this is that the movies just got too expensive and audiences have stopped showing up for movie stars. When audiences stopped showing up for (most) movie stars, Hollywood lost the key hook for original cinema and high concepts.

A film like the Wachowskis’ Jupiter Ascending wouldn’t have cost, inflation notwithstanding, $175 million back in the mid-1990s because the marketplace could barely support such a thing. Moreover, folks who flocked to Luc Besson’s The Fifth Element in 1997 ($267 million on a $90 million budget) did so partially because they wanted to see a big-budget Bruce Willis sci-fi action flick. If audiences were still inclined to show up for a Channing Tatum or Mila Kunis movie as such in 2015, then Jupiter Ascending might have had a shot in hell.

And while overseas box-office potential has exponentially increased in the last 10 years, especially in China, so too has the cost of marketing as theatrical moviegoing become more and more frontloaded. Add in the potential moviegoers who now choose streaming over movie theaters and a less viable post-theatrical income stream, and movies are now more expensive to make and market with less of a guarantee that audiences will show up in theaters or even view the film in streaming or VOD beyond whenever it pops up on a subscription-based platform like Hulu or Netflix.

All of this is to explain, in shorthand, why a movie like Chris Nolan’s Tenet is even more of an outlier in 2020 than Chris Nolan’s Inception (a $160 million, original, twist-filled action thriller that played in 2-D right as the post-Avatar 3-D boom was peaking) was a decade ago. And it’s to emphasize that Chris Nolan is arguably the only director left in the industry who gets this kind of blockbuster money to make wholly original mega-budget movies. And that’s at least partially because he has a fan base that will show up just because his name is on the marquee.

To the extent that movie stars used to be the brands/franchises unto themselves, there has been a slight reemergence of the idea that directors can be marquee “stars” in their own right. A few happy successes don’t yet make a trend, but Jordan Peele, M. Night Shyamalan, Quentin Tarantino, Edgar Wright and Rian Johnson have scored in recent years with original movies with high concepts and movie stars. Shyamalan and Tarantino were among the last of the mid-90’s generation to break out before IP and marquee characters took over, but they are still fighting the good fight. But most of these successes are anywhere from $5 million to $40 million, save for Tarantino’s $90 million Once Upon a Time in Hollywood (and relatively speaking) James Mangold’s $97 million, star-driven Ford v Ferrari.

I’m not sure Peele and Shyamalan want/need the pressures and potential studio oversight that comes with big budgets, but for now Nolan stands alone as the one guy who has such a fan base and a reputation or IMAX-worthy quality (kudos to IMAX crossing $1 billion in grosses this year) that he can justify a studio's giving him $150-$225 million on a wholly original, star-driven action thriller. That’s a hell of a thing, and a hell of a responsibility. To the extent that Nolan is a bigger draw than the likes of John David Washington, Robert Pattinson (apparently cosplaying as Nolan himself) and Elizabeth Debicki, the presumed big-scale success of Tenet could confirm that, in a skewed way, Chris Nolan is the biggest movie star in Hollywood.